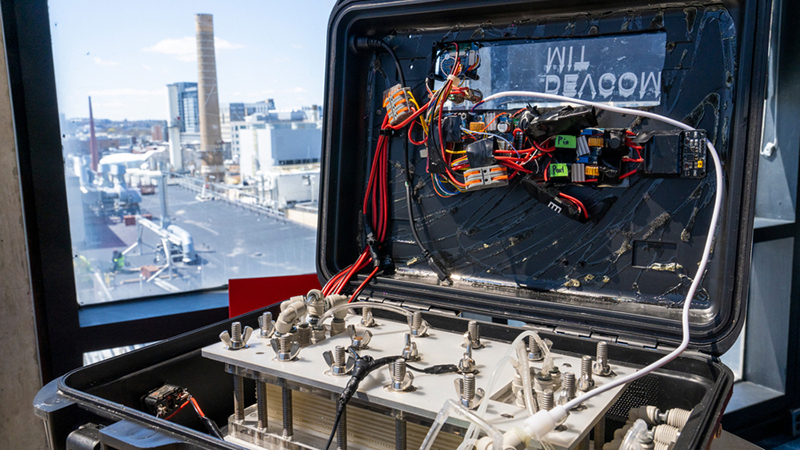 The prototype MIT device can generate clean drinking water from seawater with the press of a button (Credit: M Scott Brauer)

A portable desalination unit can remove particles and salts to generate clean drinking water from seawater using less power than a mobile phone charger, according to its developers at the Massachusetts Institute of Technology (MIT).

Weighing less than 10kg, the suitcase-sized device can also be driven by a portable $50 solar panel. It automatically generates drinking water that exceeds World Health Organisation quality standards, needing only the push of just one button.

Unlike other portable desalination units that require water to pass through filters, the MIT device uses electrical power to remove particles water.

Eliminating the need for replacement filters greatly reduces the long-term maintenance requirements, the developers said. This means it could be deployed in remote areas with severely limited resources, such as communities on small islands or aboard cargo ships. It could also aid refugees fleeing natural disasters or soldiers carrying out long-term military operations.

“This is really the culmination of a 10-year journey that I and my group have been on,” said electrical and biological engineer Jongyoon Han, senior author of a paper on the unit. “We worked for years on the physics behind individual desalination processes, but pushing all those advances into a box, building a system, and demonstrating it in the ocean, that was a really meaningful and rewarding experience for me.”

Instead, the MIT team’s unit relies on a technique called ion concentration polarization (ICP), which was pioneered by Han’s group more than 10 years ago. Rather than filtering water, the ICP process applies an electrical field to membranes placed above and below a channel of water. The membranes repel positively- or negatively-charged particles – including salt molecules, bacteria, and viruses – as they flow past. The charged particles are funnelled into a second stream of water that is eventually discharged.

The process removes both dissolved and suspended solids, allowing clean water to pass through the channel. Since it only requires a low-pressure pump, ICP uses less energy than other techniques.

ICP does not always remove all the salts floating in the middle of the channel, however, so the researchers also incorporated a second process, known as electrodialysis, to remove remaining salt ions.

The team shrunk and stacked the ICP and electrodialysis modules to improve their energy efficiency and fit them inside a portable device. The researchers designed the device for non-experts, with just one button to launch the automatic desalination and purification process. Once the salinity level and the number of particles decrease to specific thresholds, the device notifies the user that the water is drinkable.

The researchers also created a smartphone app that can control the unit wirelessly and report real-time data on power consumption and water salinity.

After running lab experiments using water with different salinity and turbidity (cloudiness) levels, they field-tested the device at Boston’s Carson Beach, generating a drinking cup of clear, drinkable water from seawater in about half an hour.

“It was successful even in its first run, which was quite exciting and surprising. But I think the main reason we were successful is the accumulation of all these little advances that we made along the way,” said Han.

The resulting water exceeded World Health Organization quality guidelines, and the unit reduced the amount of suspended solids by at least a factor of 10. The prototype generates drinking water at a rate of 0.3l per hour, and requires only 20W of power per litre.

“We are pushing our research to scale up that production rate,” said Yoon. The team also wants to address water quality issues that go beyond desalination, such as rapidly detecting contaminants in drinking water.

Also on the team were Hyukjin J Kwon, a former postdoc, SungKu Kang, a postdoc at Northeastern University, and Eric Brack of the US Army Combat Capabilities Development Command (Devcom).

The research was funded, in part, by the Devcom Soldier Centre, the Abdul Latif Jameel Water and Food Systems Lab (J-WAFS), the Experimental AI Postdoc Fellowship Programme of Northeastern University, and the Roux AI Institute.

The research was published online in Environmental Science and Technology.

Want the best engineering stories delivered straight to your inbox? The Professional Engineering newsletter gives you vital updates on the most cutting-edge engineering and exciting new job opportunities. To sign up, click here.

Content published by Professional Engineering does not necessarily represent the views of the Institution of Mechanical Engineers.