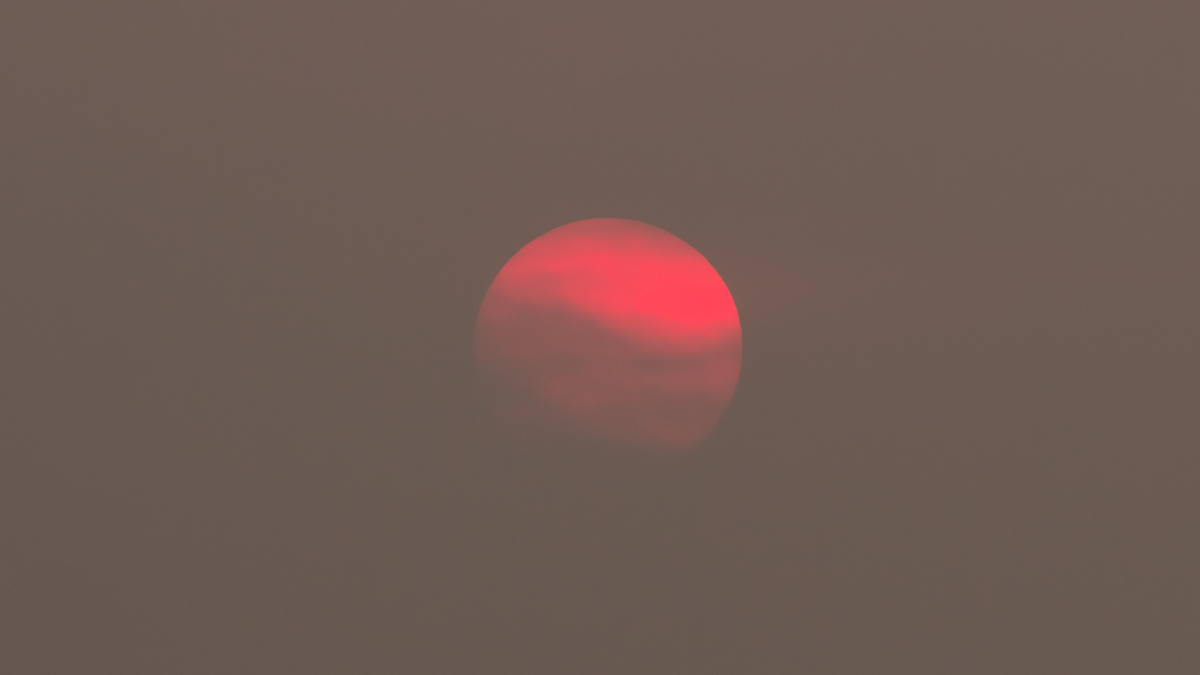 When wildfire smoke billows from its source and lingers in the air, the haze brings coughs and questions for many Montana residents. Among them: How should I interpret air quality ratings? How does smoke affect my indoor air quality? Is it safe to walk my dog or head out for a hike today?

Montana Free Press put those questions and others to public health officials and researchers. While the answers are sometimes tricky to navigate — and leave plenty of space for personal choice — the bottom line is that there are plenty of resources available to help you make decisions about your health and comfort this wildfire season.

HOW DO I DETERMINE HOW BAD THE AIR QUALITY IS?

You can check public websites, either the state of Montana’s Today’s Air page or the U.S. Environmental Protection Agency’s Air Now website. Both present sensor data from specific monitoring locations and report air quality ratings based on PM2.5 readings, which measure the concentration of small airborne particles at monitoring sites.

MTFP also summarizes data from the Air Now website on the MT Fire Report, which is updated hourly. Here’s the map we publish there:

Most weather apps aren’t the best reference because they usually report air quality in terms of ozone levels, not PM2.5 concentrations, and forecast or model conditions instead of using real-time data, said BJ Biskupiak, who runs school-health and asthma-control programs at the state Department of Public Health and Human Services.

The Montana Department of Environmental Quality also offers an email or text update system that alerts users to smoke and wildfires. The Montana Wildfire Smoke web page from Climate Smart Missoula provides guidance on understanding the health impacts of wildfire smoke and making a plan for keeping your indoor air clean.

Missoula City-County Air Quality Specialist Sarah Coefield said she gets lots of questions about differences in the numbers reported by the EPA and the DEQ sites. Both agencies measure the same thing, but present the data differently, she said.

Coefield said people should pay most attention to the colors attached to the ratings, which provide a general indication about how risky the air quality is.

PM, or particulate matter, refers to tiny particles — solid or liquid — suspended in the air. It comes from a variety of sources, from windborne sand to wildfire smoke. Air currents can carry PM2.5 thousands of miles, Biskuviak said, which is why a fire in Canada can soot up skies over, say, Bozeman.

Coefield described wildfire smoke as a “chemical stew.” It consists of gaseous pollutants including carbon monoxide, water vapor and solid particle pollution, like PM2.5. PM2.5, which is the tiniest version of particulate matter, is the most-often-measured component of wildfire smoke. The 2.5 indicates size — PM2.5 particles are less than two and a half micrometers in diameter, or about one twenty-fifth the diameter of a strand of hair.

Because PM2.5 is so small, it escapes entrapment by nose hairs, which filter out unwanted particles, and makes its way into the lungs and bloodstream, said Tony Ward, chair of the school of public and community health sciences at the University of Montana.

Ward said Montana has an extensive PM2.5 monitoring network because it’s the most common type of air pollution in the state.

WHAT DO THE U.S. EPA AIR QUALITY CATEGORIES MEAN?

Public health officials sort air quality into six categories based on the amount of particulate in the air. Montana’s public health department provides outdoor activity guidelines for each category. Summarized briefly, those are:

“Sensitive” refers to how likely a person is to be affected by airborne smoke, Biskupiak said. Children up to age 17 fall into this category because their lungs are still developing, and they inhale more air per pound of body weight than adults. Older adults age 60-plus also tend to have preexisting lung and heart conditions and less ability to fight off illness. The “sensitive” group also includes people with chronic illnesses and pregnant women.

Examples of “light” activity include walking, stretching or lounging in the park. Yoga, gymnastics, canoeing and skateboarding are considered “moderate” activity, and “vigorous” exercise includes activities like running, mountain biking, wheeling a wheelchair and competitive sports.

IS IT BETTER TO STAY INSIDE?

The EPA says indoor air may actually be worse than air outside. Ward said this is where people need to perform a personal risk assessment. “There’s no safe level of breathing in PM2.5,” he said.

If you don’t have air conditioning and open windows to cool your house on a smoky day, that can introduce particles into your living space. Ideally, people would have air filtration units in their homes, Ward said. That can range from installing air purifiers in every room to rigging a box fan to act as an air filter. Air purifiers are rated based on filter size and matched to appropriate room size. Ward said that if your home only has one air filter, the best option is to create a clean-air space in a room where your family spends the most time.

The state health department provides information on how to choose an appropriate HEPA filter for your space and a weatherization assistance program. The Montana Asthma Home Control program also provides free, small HEPA filters to people with asthma.

Coefield said people may need to make a judgment call between managing heat or smoke, especially if they don’t have access to air conditioners or air purifiers. She advised letting in as much air at night as tolerable to cool down the house and cleaning it through whatever system is available.

“The heat will kill you faster,” Coefield said.

WILL WEARING A MASK OUTSIDE HELP?

Cloth and surgical masks aren’t effective against PM2.5. N95 or P100 respirators can work if they’re properly fitted and used correctly. If not worn properly, they can leak, which allows smoke to bypass the mask.

IS MY AIR CONDITIONER HELPING OR HURTING?

Air conditioners that bring outdoor air inside to cool and circulate can bring smoke in, too. Ward said having a filter on any A/C intake may help scrub out PM2.5. Alternatively, if your central A/C has a fresh air intake, set the unit to recirculate mode — that way, the A/C will draw air from inside the house, cooling it, and recirculating it. Recirculation is an option for vehicles with air conditioning, too.

HOW AM I SUPPOSED TO ENJOY THE SUMMER WHILE KEEPING MY LUNGS SAFE?

If you’re training for a marathon, Ward said, it might not be great to stick to your training plan.

Inhaling PM2.5 is “very harmful for your body not only [in the] short term, but also long term,” he said. Harmful effects include breathing problems, exacerbated asthma, cardiovascular diseases, and even lung cancer.

Keep an eye on air quality monitors, follow local smoke blogs and watch the weather. Wind patterns and pressure systems may be indicative of upcoming relief.

WHAT DOES SMOKE ACTUALLY DO TO MY LUNGS?

Respiratory and cardiovascular systems are the first to be affected by wildfire smoke. PM2.5 sinks deep into the lungs and, because it’s so small, can dissolve into the bloodstream. People with preexisting lung or heart conditions are at particular risk for hospitalization or early death after a month of sustained wildfire smoke.

After the 2017 Rice Ridge Fire in Seeley Lake, researchers followed members of the Seeley Lake community for two years to assess the impact of heavy wildfire smoke. Up to two years after the fire, researchers found a significant decrease in lung function. A study out of the University of Montana found that higher PM2.5 concentrations in the summer are positively correlated with an increase in flu the following winter.

Children are particularly vulnerable to wildfire smoke, as their lungs are still developing, and they take in more air per body weight compared to adults. Lung function in earlier ages is indicative of respiratory health later in life. Exposure to PM2.5 as a child decreases lung function and harms the organs early on.

WHAT SHOULD I DO WHEN IT’S BEEN SMOKY FOR DAYS?

Contiguous days of smoke usually mean you’re in close proximity to fires or weather systems that draw smoke into the same region. There will usually be interims of improved air quality even during a lengthy smoke event. When there’s a break, Biskupiak said, it is important to open the windows and try to get the smoke out of your home.

Aside from those cleaner-air moments, Biskupiak recommended setting a limit on time spent outdoors, monitoring air quality on a regular basis, using air quality data to adjust exercise routines, and keeping an eye out for symptoms. Coughing, scratchy eyes and throats, shortness of breath, wheezing and chest pain could indicate too much particulate exposure.

“It’s really more nuanced than anyone would like it to be.”

Biskupiak said he limits how much time he spends outside during smoke events. He knows he doesn’t fall into the “sensitive groups” category, but when air quality is in the “unhealthy for sensitive groups” or “unhealthy” range, he might go on an easy half-hour walk, but that’s it.

Being attuned to your individual response to wildfire smoke is important, Biskupiak said, and can serve as a guide for moderating your outdoor activity.

“It’s really more nuanced than anyone would like it to be,” Coefield said. The orange “unhealthy for sensitive groups” category might feel fine for you one day, but intolerable a month later.

Human health is a spectrum, Coefield said, and it’s important to listen to your body.

As Gov. Greg Gianforte described the job facing his newly convened housing task force Wednesday, he made a point of asking the group’s 26 members to think outside the box as they spend the next several months working to identify the root causes of Montana’s housing crunch and propose solutions for consideration by the governor…

An annual Drag Story Hour event for children is scheduled to take place as planned in Helena this weekend during one of Montana’s LGBTQ Pride celebrations, even as law enforcement organizations track threats against the event posted online by a self-proclaimed member of the Oath Keepers, a national anti-government militia group.

Over the past month, Superintendent Elsie Arntzen has floated a request to redirect revenue for teacher licensing fees from the Board of Public Education to OPI — a move designed to cover the ongoing expenses of her agency’s new licensing system.