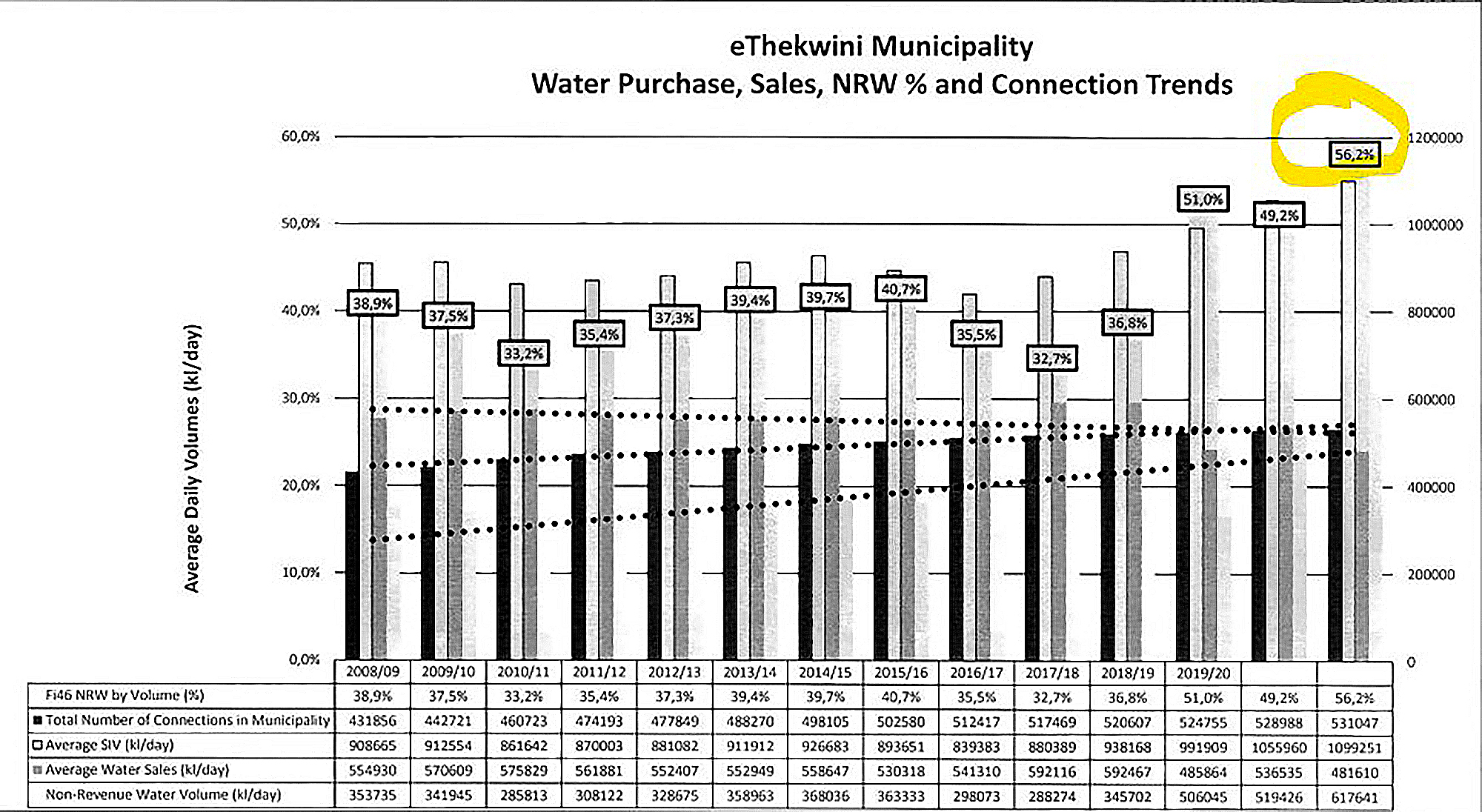 Ten years ago, Durban’s non-revenue water (NRW) losses stood at 33%. For the past few years, annual losses have hovered around the 40% mark — but the latest figures presented to eThekwini’s municipal public accounts committee reveal that NRW losses have soared dramatically over the past three years.

NRW is classified by the World Bank as water that is lost through leaking taps and pipes, from not billing customers, or both.

NRW losses vary widely across the world, with countries like Singapore, Denmark and Japan losing less than 7% of potable water each year, while losses in developing countries such as Nigeria and Liberia sometimes reach 70% from leaks or theft.

Compared with South Africa’s other big cities, Durban appears to be leading the pack for all the wrong reasons.

An analysis of recent annual reports suggests that Cape Town’s lost or unpaid tap water losses are around 20%. Joburg’s NRW losses are 39%, while Nelson Mandela Bay’s losses are 44%. Mangaung (Bloemfontein) is at 46%.

Average municipal losses across the country are estimated to be around 41%.

Quite apart from the fact that South Africa is ranked as the 30th most water-scarce country in the world, the latest rate of water revenue loss in Durban means that the city is only collecting revenue for less than 44% of the water supplied by Umgeni Water.

Based on the current Umgeni bulk water charge of R8.26 a kilolitre (kl), this means the city is paying R1.86-billion a year for water that is either stolen, leaking away or not charged for.

However, eThekwini charges its customers a much higher tariff than the Umgeni bulk water charge. For example, domestic customers currently pay nearly R27/kl for consumption up to 6/kl per month and a tariff of nearly R32/kl for higher consumption rates — suggesting that the R1.8-billion annual revenue loss estimate is very conservative and could be almost double or triple this amount.

The latest figures have come to light at a time when eThekwini is coming under increasing pressure to resolve the city’s sewage pollution crisis in local rivers and the sea — but officials have argued that Durban lacks the funds to repair damage to wastewater treatment infrastructure following the April/May floods (and pay for rehabilitation or maintenance work that predates the floods).

Alan Beesley, ActionSA’s caucus leader in eThekwini and a member of the city’s municipal public accounts committee, says an analysis of a report submitted to the committee earlier this month shows that the city buys roughly 1,099,251kl of water daily from Umgeni — but 617,641kl of this is classified as non-revenue water.

Back in 2010, Durban’s water revenue losses stood at around 33%. A decade later the losses have soared to 56%. (Graph: Ethekwini municipality)

A table showing a breakdown of daily water losses suggests that nearly 11% of the losses are due to unauthorised consumption (theft/non-payment) and 44% from leaks in water mains or service leaks.

According to a 2006 World Bank study, high levels of NRW seriously affect the financial viability of water utilities through lost revenues and increased operational costs.

“A high NRW level is normally a surrogate for a poorly run water utility that lacks the governance, autonomy, accountability and technical and managerial skills necessary to provide reliable service to their population,” it suggests. 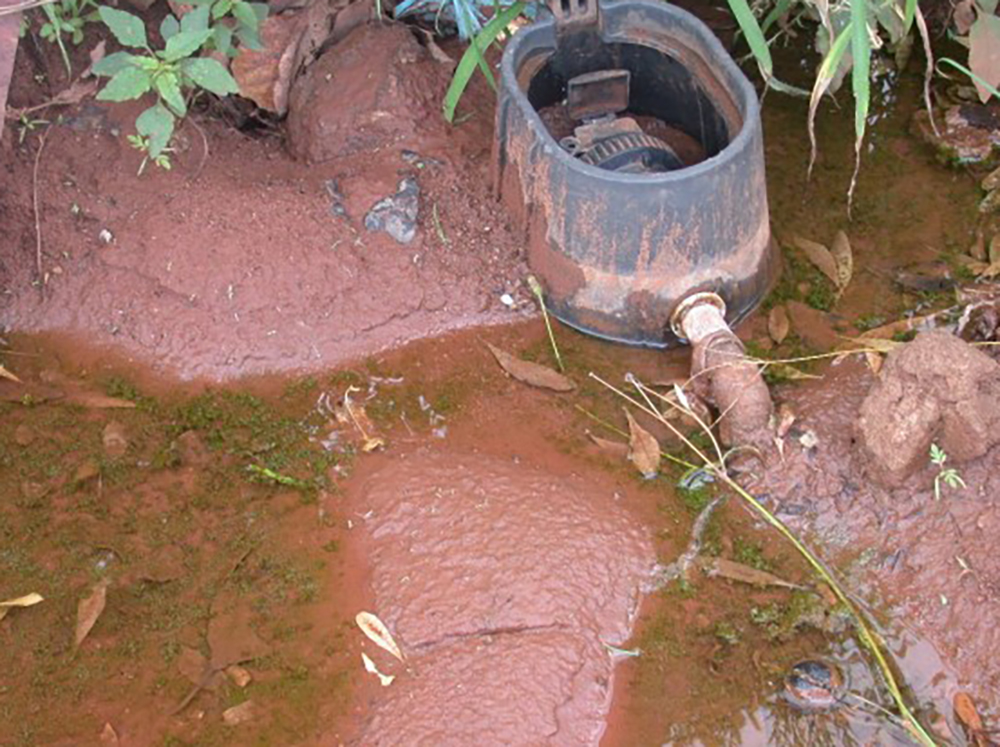 Beesley notes that the city has also chopped the Capex budget for eThekwini’s water and sanitation department over the past three years, from R1.5-billion in 2019/2020 to the current level of around R1.1-billion.

“No wonder there is a crisis,” he told Our Burning Planet.

Beesley further notes that the city is owed another R1.1-billion from government departments and the Ingonyama Trust, and a further R257-million from parastatals such as Transnet, Metrorail and Prasa for a variety of services provided. 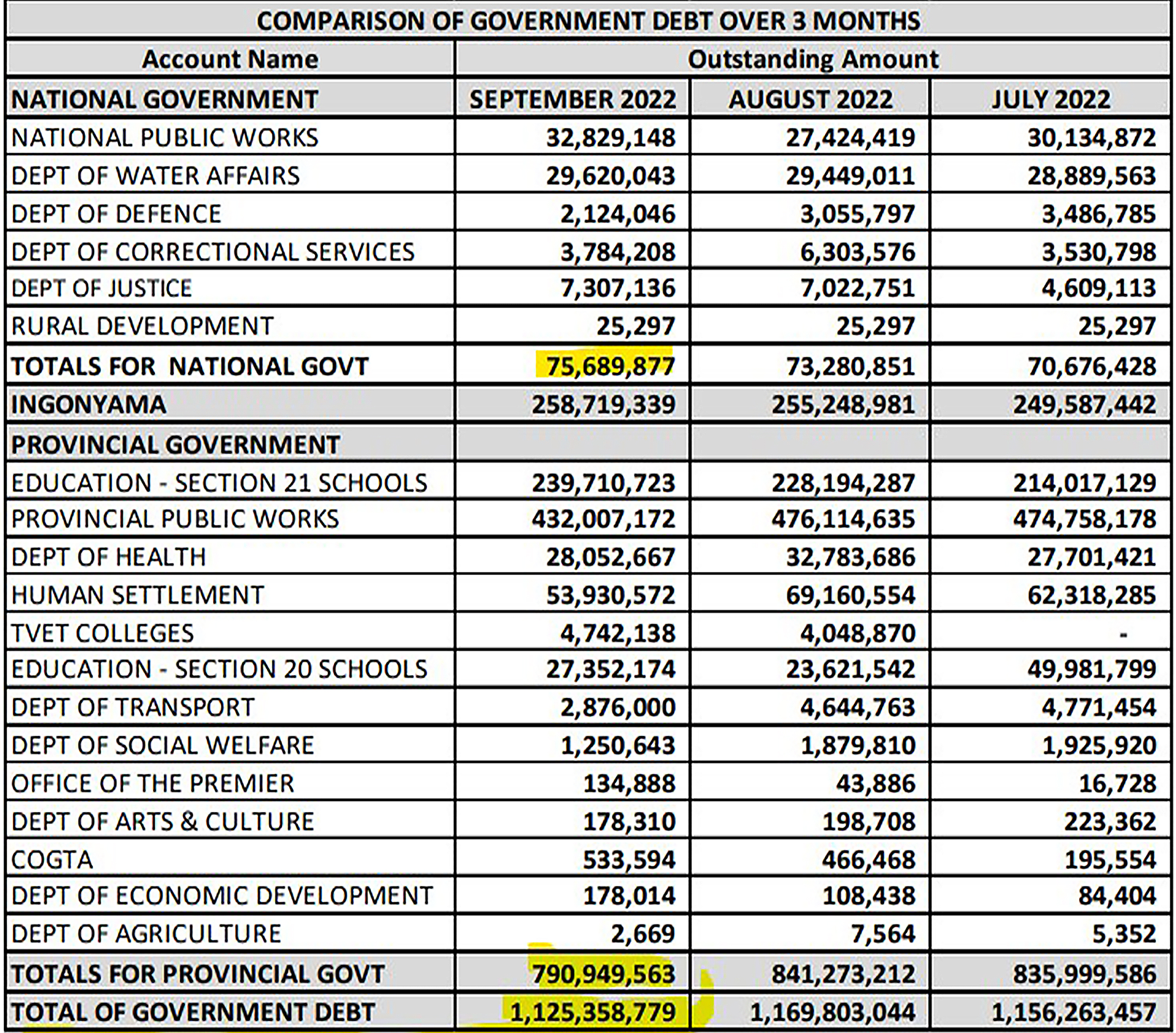 “The municipality cries poverty, but if they collected what was owed by government departments and parastatals, there would be more funds to effect repairs and improve service delivery,” said Beesley, whose party launched civil action in the Durban High Court last week to compel eThekwini to resolve the sewage crisis that has polluted local rivers and led to the closure of several popular tourist beaches.

“Ordinary citizens have their services cut for non-payment of municipal accounts. This does not seem to apply to government departments and parastatals,” he charged.

Though the eThekwini municipality has yet to respond formally to the ActionSA court action, the city has previously blamed its failure to resolve the sewage crisis largely on budget shortfalls following the devastating floods six months ago.

Though the city says it has reprioritised its budget, a recent presentation to the executive committee revealed that there is still a R441-million shortfall to tackle the estimated R706-million bill needed to repair sewage treatment and conveyance systems damaged during the floods.

Commenting on the latest 56.2% NRW losses in eThekwini, former Durban water and sanitation chief Neil Macleod said this percentage was likely to keep rising by roughly 2% a year if insufficient action was taken to curb leaks and improve revenue collection.

He drew the analogy of a shopkeeper having to watch 56% of his stock walking out of the back door without going past the cash register.

Macleod noted that sewage tariffs are raised as a percentage of water used in every home or business, meaning that revenue for sewage treatment was also reduced due to high NRW losses.

He said that the international benchmark target for NRW in developed countries is 10%, with a 25% target for developing countries.

Comprehensive statistics on NRW losses in South African cities and towns do not appear to have been published recently, though a 2019 report by a team of local water experts suggested that, on average, nearly 41% of municipal water does not generate revenue.

The report notes that figures vary across the country, but average physical losses of water in South African municipal systems were around 35%, against a global best practice of about 15%.

An older Water Research Commission report from 2012 estimated NRW for the country as a whole at 36.8%. DM/OBP