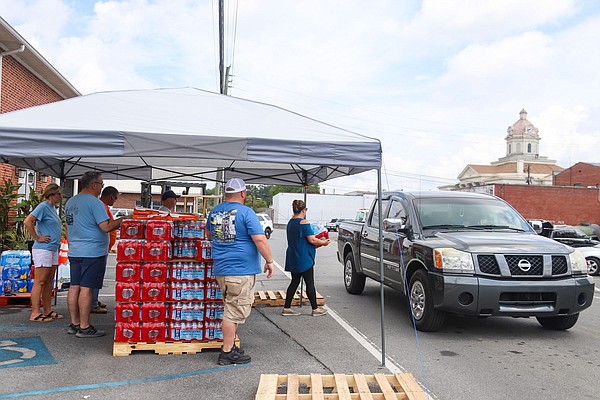 A flooded filtration plant in Chattooga County, Georgia, has knocked the city of Summerville’s municipal water system offline for days, leaving city officials racing to restore water service as officials from all over the state begin to assess Sunday’s flood damage.

City water should be restored at the end of the week, Janice Galloway, Summerville city manager, said in a phone interview. That could be Friday or even Sunday, but she said she’ll know more when a contractor visits the city’s water treatment plant Wednesday.

There were about 30 people working at the plant Tuesday afternoon to restore service to its 11,000 customers, Galloway said.

Until water service is restored, the city is giving out bottled water at City Hall from 8 a.m. to 5 p.m., she said. Water tanks are also available at City Hall 24 /7, she said, but people have to bring their own bottles.

“We’ll close at 5 p.m. tomorrow (Wednesday), unless we need to go longer,” Galloway said. “Or as long as we have it available, but there’s a lot, so it shouldn’t be a problem.”

Galloway said officials are also planning to offer water in the town of Menlo, and at a nursing home and high-rise apartment complex in Summerville.

Outside City Hall, cases of bottled water were distributed, while a few people stopped to fill jugs from water trucks. Inside City Hall, Summerville Mayor Harry Harvey said it could have been worse, but many businesses in downtown were damaged by Sunday’s floods.

“It went up real quick and down real quick,” Harvey said about the flooding.

There is some damage, mainly concentrated in downtown Summerville, but the biggest problem is the water purification system.

Some damage assessments have been delivered to City Hall, but a definitive list hasn’t been tallied, Harvey said.

Chattooga County sole Commissioner Blake Elsberry said multiple state and county agencies are assessing damage to roads, bridges and buildings, while local businesses determine how much flood damage and downtime is costing them.

“We’re working on damage assessments for businesses to see if they’ve met the threshold for FEMA (Federal Emergency Management Agency),” Elsberry said in a phone interview.

He gave the example of Mohawk Industries — a flooring manufacturer and one of the largest employers in the county — which has paused operations because it runs on city water. Many companies have lost business due to the flood, and reaching that FEMA disaster threshold would make more financial resources available to those affected, he said.

Beyond what’s available in the city, Elsberry said many of the local churches are giving out water. Water distribution sites and other resources are available on the Chattooga County EMA E911 Facebook page and will be soon, Elsberry said, on the county’s website.

At the water treatment plant, Jason Green, plant supervisor, emerged sweaty from the plant’s original tank built in 1952. Usually only two people work at the plant most days, but he said workers from many different city government departments and even other counties have showed up to help.

Galloway said the clear water tanks flooding is the “biggest issue” that’s impeding getting the water system back up and running.

Stormwater from nearby Raccoon Creek — the creek where the plant draws its water — flooded the clear water tanks, he said, so those tanks were being pumped out, and then they have to be sanitized. Clear water tanks are where the treated water is stored before it can be sent into the delivery system’s pipes.

County employees turned off a set of electric pumps before they were submerged, he said, and had fans drying them out Tuesday afternoon. Green said officials won’t know if they were damaged until the pumps are fully dried out.

Another issue was flooded equipment that regulates the pumps pushing filtered water into the clear water tanks. Green said Mohawk was “generous” enough to donate two of its variable frequency drives, and they were also being hooked up Tuesday.

Green said he didn’t know exactly when the water treatment plant would be back online and wanted to let City Hall make the official estimate. He said workers at the plant are working hard and trying to be optimistic.

“People can rest assured that everyone in this city (government) that was available to work was here doing the very best they can to get the system up and running,” Green said. “We’re not going to give up.”