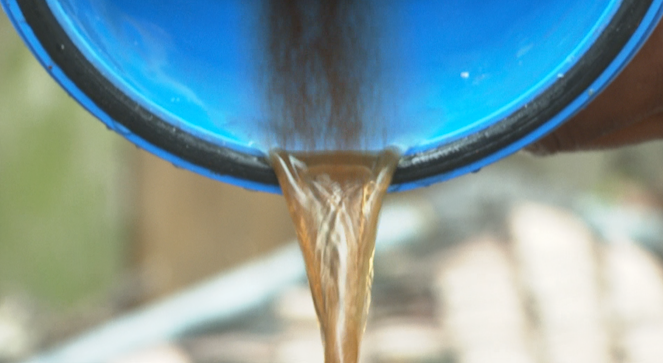 “It gets clogged up,” he said. “If this wasn’t filtered, this would be in the drinking water. You fill up the bath and it looks like someone poured a cup of coffee in the bath water.”

His faucet water runs – mostly – clear, thanks to the filters, which Spencer said were a necessity.

“Everyone is entitled to clean drinking water,” he said. “I want to see some action.”

City Manager Barbara Holly said the murkiness is “either going to be from the iron and manganese, which is less likely, it’s more likely to be breaking free from the cast iron pipes.”

In 2020, the Texas Water Development board approved $27.4 million in financial assistance to replace the old pipes and overhaul the wastewater system.

She claims the state has moved slowly since the funding was approved.

We asked the Texas Water Development Board about the status of the project. A spokesperson provided the following statement:

We have been working closely with the City regarding the funding commitments and process and requirements for reimbursement. The TWDB has reimbursed the City for all planning phase expenses it has submitted. Currently, the TWDB is reviewing the City’s Categorical Exclusion Environmental Review request and has provided comments to the City on its Engineering Feasibility Report. When those two deliverables are approved, the City’s planning phase will be complete and the City’s design phase activities will be eligible for reimbursement. We will continue to work closely with the City on this important project.

As the bureaucratic process persists, so do the city’s water woes.

“Diluted coffee,” Spencer said, while looking at some of the water that didn’t make it through one of his filters.

He’s found a way around the issue for now – by using the filters – but he says it’s costly.

“These filters are designed to last six months to a year, but I’m only getting two months out of them,” he said.

According to our previous reports, the City increased residents’ water bills to bring in additional revenue to help fix the problem.

Holly said she hopes the project will go to bid in December.