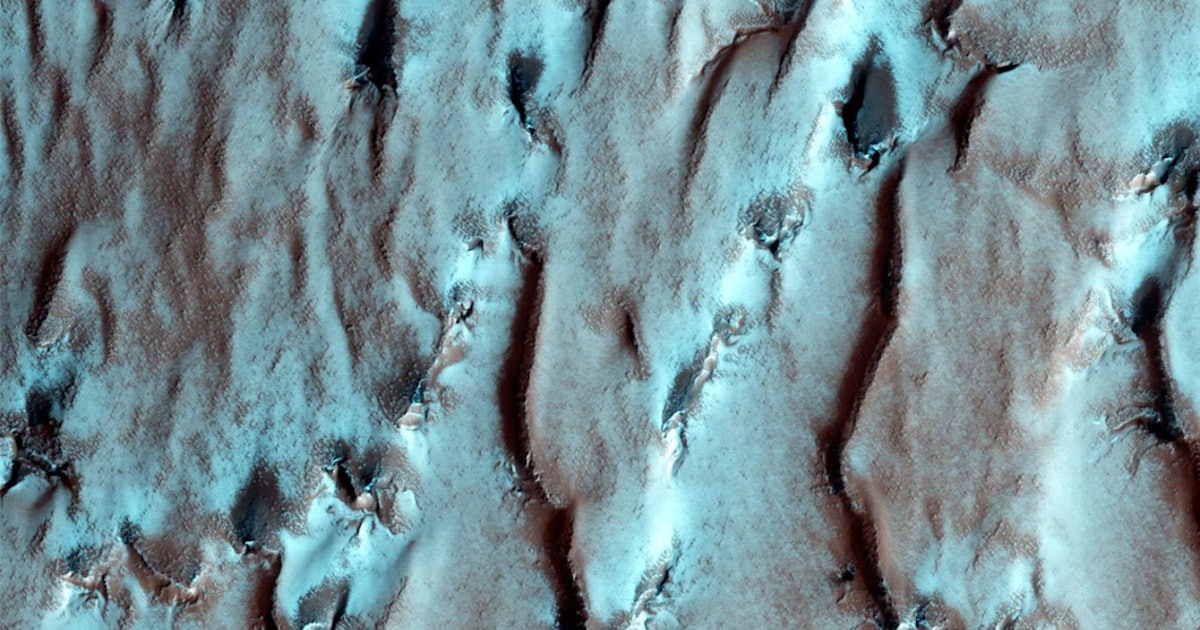 When planning crewed missions to Mars, the key phrase is “follow the water.” When astronauts set down on the Red Planet in the next decade, they will need access to water to meet their basic needs.

Following the water is also crucial to our ongoing exploration of Mars and learning more about its past. While all of the water on the Martian surface exists as ice today (the majority locked away in the polar ice caps), it is now known that rivers, lakes, and an ocean covered much of the planet billions of years ago.

Determining where this water went is essential to learning how Mars underwent its historic transformation to become the dry and cold place it is today.

Close to 20 years ago, the ESA’s Mars Express orbiter made a huge discovery when it detected what appeared to be a massive deposit of water ice beneath the southern polar region. However, recent findings by a team of researchers from Cornell University indicate that the radar reflections from the South Pole Layered Deposit (SPLD) may be the result of geological layering.

The research was led by Daniel Lalich, a research associate with the Cornell Center for Astrophysics and Space Science (CCASS). The paper that described their findings, titled Explaining Bright Radar Reflections Below The South Pole of Mars Without Liquid Water, was published on September 26 in Nature Astronomy.

NASA’s Mars Reconnaissance Orbiter captured this view of the sloping edge of the stack of icy layers over the South Pole.NASA

In 2004, the Mars Express orbiter detected the SPLD using the Mars Advanced Radar for Subsurface and Ionosphere Sounding (MARSIS). While many astronomers concluded that the radar reflection was the result of a 1.4 kilometers (0.89 miles) thick formation of relatively pure water ice, there has been an ongoing debate ever since as to whether the SPLD is water ice or something else entirely.

For the sake of their study, Lalich and his colleagues ran computer simulations on the MARSIS data to investigate what could have generated the strong radar reflections.

As they explained in their paper, radar reflections of this kind are the result of liquid water on Earth, as indicated by buried lakes like Lake Vostok, located under the East Antarctic Ice Sheet. But on Mars, the prevailing opinion was that conditions are too cold for similar lakes to form.

To investigate this, Lalich and his colleagues used a one-dimensional modeling procedure commonly used to interpret MARSIS observations. This consisted of simulating layers composed of four materials (atmosphere, water ice, carbon dioxide [CO2] ice, and basalt) and assigning each layer a corresponding permittivity.

This describes the interaction between a material and how electromagnetic radiation passes through it instead of being reflected by it. In the end, they found that simulations using three layers (two layers of CO2 ice separated by a layer of dusty ice) produced reflections as bright as the MARSIS observations.

This effectively showed that geological layers could account for the SPLD readings without the presence of water or other rare materials. As Lalich explained in a recent Cornell Chronicle news release:

“I used CO2 layers embedded within the water ice because we know it already exists in large quantities near the surface of the ice cap. In principle, though, I could have used rock layers or even particularly dusty water ice, and I would have gotten similar results. The point of this paper is really that the composition of the basal layers is less important than the layer thicknesses and separations.”

From their modeling, the team also determined that the layers’ thickness and spacing have a bigger impact on reflection power than their respective composition. While this does not necessarily mean that there is no liquid water beneath the Martian south pole, the results indicate that the MARSIS readings can be reproduced without water.

This builds on research conducted in 2021 (to which Lalich contributed) that showed that under the right conditions, a class of minerals common on Mars (smectite) could produce a reflection similar to what was observed by MARSIS.

Given its importance to future missions and to understanding the evolution of Mars, it is vitally important that scientists determine where water is on Mars (and where it is not). The presence of liquid water beneath the polar cap could also have important implications for its age, the internal heating of Mars, and how the planet’s climate evolved in recent geological periods.

Much the same is true of the many other suspected underground lakes detected in recent years. As Lalich indicated, he and his colleagues are not ruling out the possibility of liquid water yet:

“If there is liquid water, maybe there’s life, or maybe we could use it for future human missions to Mars. None of the work we’ve done disproves the possible existence of liquid water down there. We just think the interference hypothesis is more consistent with other observations. I’m not sure anything short of a drill could prove either side of this debate definitively right or wrong.”

This article was originally published on Universe Today by Matt Williams. Read the original article here.

LEARN SOMETHING NEW EVERY DAY.