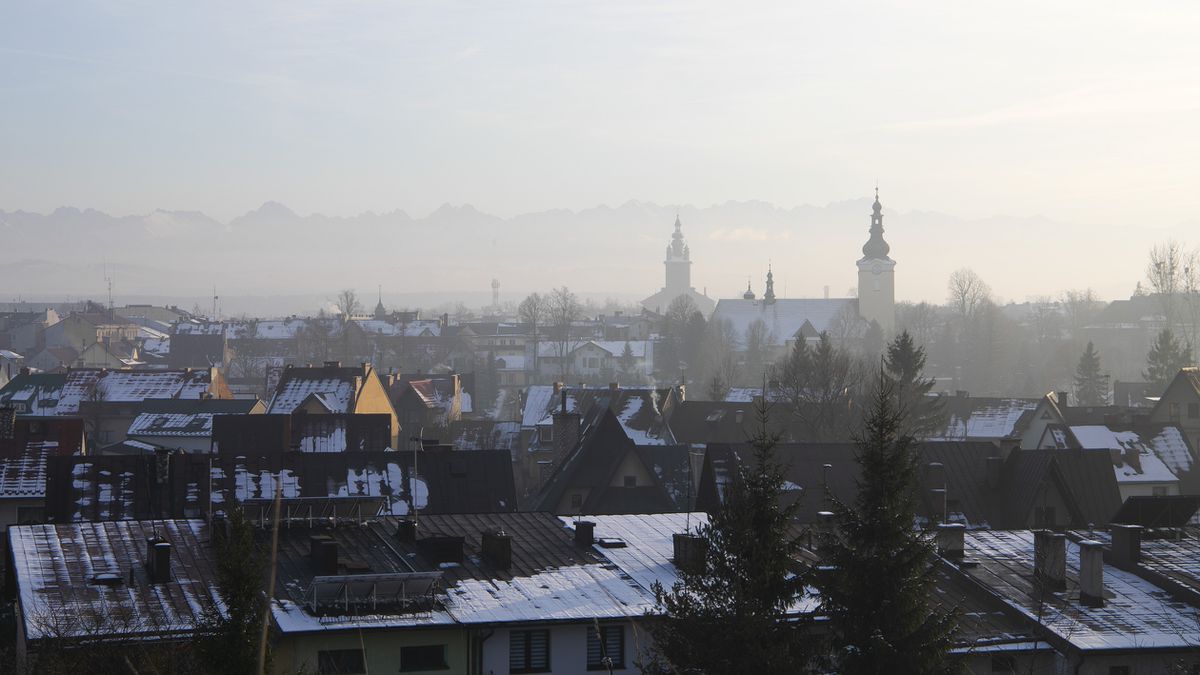 At the foot of the Tatras, the Alpine mountains of the Carpathians that separate Poland and Slovakia, lies Nowy Targ, in a depression where two rivers converge. A few kilometers to the northwest, other mountains, those of the Gorce National Park, embrace the municipality of 34,000 inhabitants. It sounds like clean air and nature, winter and mountain sports. If it weren’t for the toxic smoke that comes out of the homes, the one that produces the coal that heats them in an endless winter, that suffocates Nowy Targ and makes it the most polluted city in Poland.

On bad days, the pollution is so intense that you can see it, smell it and almost touch it. From the hill where the hospital and the municipal cemetery are located, the city seems to be swallowed up by a thick cloud with an ocher tone of smog -for smoke (smoke) and fog (fog), in English. Only behind Bulgaria, Poland is the most polluted country in the European Union, as collected by Eurostat. Of the 50 European cities with the worst air quality, 36 are Polish, according to the World Health Organization. Nowy Targ has become the worst of the worst.

According to him ranking annual Polish Smog Alert activist movement published on December 9, the city led the ranking in the three categories they analyzed with data from 2020. Among the hundreds of Polish measurement stations studied, theirs registered the highest average annual concentration of PM10 particulate matter (42 mg / m³ ), the highest number of days with unbreathable air (90) and the highest annual concentration of the carcinogen benzopyrene (18 ng / m³, 1,800% above the limit allowed in Poland).

Four days after the ranking made public, the mayor, Grzegorz Watycha, considers it “irritating” and unfair. As he explains, they are on the list because the problem worries them and they have set up a measuring station that other places lack. “We are a bit punished because we want to solve the problem and we are aware,” he insists. Along with the classification, Smog Polish Alert denounced that three days before the City Council had changed the location of the station to a site that, they consider, will collect lower levels of pollution and will make it difficult to assess the annual evolution.

Watycha explains that 60% of the city’s polluting emissions come from outdated domestic boilers that still run on coal today. [en Polonia suponen más del 50% de la polución], in many occasions of very low quality, and even garbage. In one of the coldest cities in Poland, the mayor emphasizes that his neighbors spend twice as much as the Polish average on heating, which can take eight months a year, which complicates the switch to other fuels that are more expensive, like gas. The remaining 40% of the polluted air is attributed to cars and the surrounding towns, “where nothing is done.” The orography of the place, added to the thermal inversion when it is colder in the valley than in the mountains, means that the contamination remains trapped at ground level.

Join MRT to follow all the news and read without limits.

The mayor is concerned about the image that the city projects abroad with this ranking which takes Spanish journalists to sit in his office, who have traveled there as part of the Europa Ciudadana series financed by the European Parliament. Dr. Lidia Kolodziej is anxious about the health of her patients, “especially children, whose respiratory system develops up to seven years.” It does not have local data, but those of the Malopolska region, where Nowy Targ is located, and the Silesia mining region, also highly polluted, collect four times as many cases of early childhood asthma. “I observe very clearly that in the periods of more pollution these children have more respiratory problems, bronchitis and infections,” he explains. “My drama is that instead of being able to prescribe a healthy diet and exercise outdoors, I have to ask them to stay home,” he says in his bright living room, where he has an air purifier.

In adults, he continues, a higher incidence of lung, circulation and heart diseases is observed. There is also a higher prevalence of lung cancer among nonsmokers because of the benzopyrene that is breathed in Nowy Targ, which is a substance also found in cigarettes, he notes. Older people, who are also at risk of developing early dementia, do not pay much attention to it. “They say it is the smell of winter and that it has always been done that way (burning garbage, including plastic).”

Denial, outrage and resignation can be seen on the streets of Nowy Targ. Maria Sieka, 73, who has a kiosk in the main square where she sells souvenirs and bovine garments, he does not believe that the pollution comes from the heaters, but from the cars, but in reality it does not matter much to him: “I am 73 years old and I am not worried; I have asthma and I live very well ”. Julia Janczy, an 18-year-old student, finds the situation in her city “horrible”: “We are in the mountains and in theory we should have fresh air”.

Marcin Kowalczyk, a 41-year-old attorney, is aware that living in Nowy Targ is “like smoking a pack of cigarettes a day.” “I try not to worry, because I have to live here.” “You can tell how some days you feel worse, with less energy, with headaches, and you don’t want to leave home,” says Danuta Duda, 27, a manager of rural accommodation. His guests ask him “what does he smell like, what are the neighbors burning”.

In Poland, about 45,000 premature deaths a year are attributed to pollution. “It is a pandemic in slow motion, it has a gigantic impact on health,” says Javi López, a socialist MEP, who considers the Polish case “a scandal”. As a member of the European Parliament’s Committee on Health and Environment, he advocates for the tightening of EU pollution limits in line with the WHO. Anna Zalewska, MEP for Law and Justice (PiS), the ultra-conservative party that governs Poland, nevertheless warns that “any change must take into account the socio-economic possibilities and the cost” for the Member States.

For the Polish government, says Zalewska, pollution is a priority issue. Through the national Clean Air program, it promotes the replacement of more than three million old boilers for more efficient ones with a 10-year budget of 103,000 million zlotys (about 22,000 million euros) and the improvement of insulation in homes. The program receives between 4,500 and 5,000 requests a week and since its launch in 2019 until December 10, it has collected 368,000 requests, according to the National Fund for Environmental Protection and Water Management. Nowy Targ estimates that they have to change up to 1,500 boilers and supplements the national subsidies with municipal aid of 5,000 zlotys. So far they have financed some 150 performances.

Magdalena Cygan, Smog Alert activist in Nowy Targ, who worked closely with him until the publication of the ranking and the complaint that has upset the City Council, believes that both residents and local authorities can and should do more. “People prefer to buy a better car, a television, than to think that another source of heat will be more beneficial,” he complains. Although he has heard from citizens who are considering moving, his plans are to continue working until the cloud that stifles Nowy Targ is eliminated. In the future, you know not immediate, but hope not too far away, you trust that the neighbors can breathe clean air and really enjoy nature.

In 2012 Polish Smog Alert was born as a small group of activists who, concerned about the air that was breathed in Krakow, began to make noise through social networks. They were joined by scientists, doctors, activists and companies and their actions succeeded in putting pressure on the City Council, as its founder, Anna Dworakowska, recounts.
In 2019, the city banned burning coal and wood in boilers or stoves (Nowy Targ, 90 kilometers away, awaits regional legislation, which sets the date in 2030). The ban was complemented by a program that in the first two years financed up to 100% of the costs of replacing boilers, and that for the most vulnerable neighbors also covers the extra cost of changing the heating source, normally gas. . “For three or four years, day after day, building by building, officials and external workers were informing the inhabitants that they had to change the boilers and offering them solutions,” explains the Plenipotentiary of the Mayor of the city of Krakow for quality more than 20,000 have been replaced and about 500 remain.
According to Piotr Kleczkowski, a professor at the AGH University of Science and Technology, who has analyzed the result of the ban on burning fossil fuels, the city has reduced its pollution levels between 43 and 45% in all the substances analyzed. “It has been a great success and it would be even more so if it weren’t for the rest of the municipalities in the metropolitan area,” he says.

Disclaimer: This article is generated from the feed and not edited by our team.