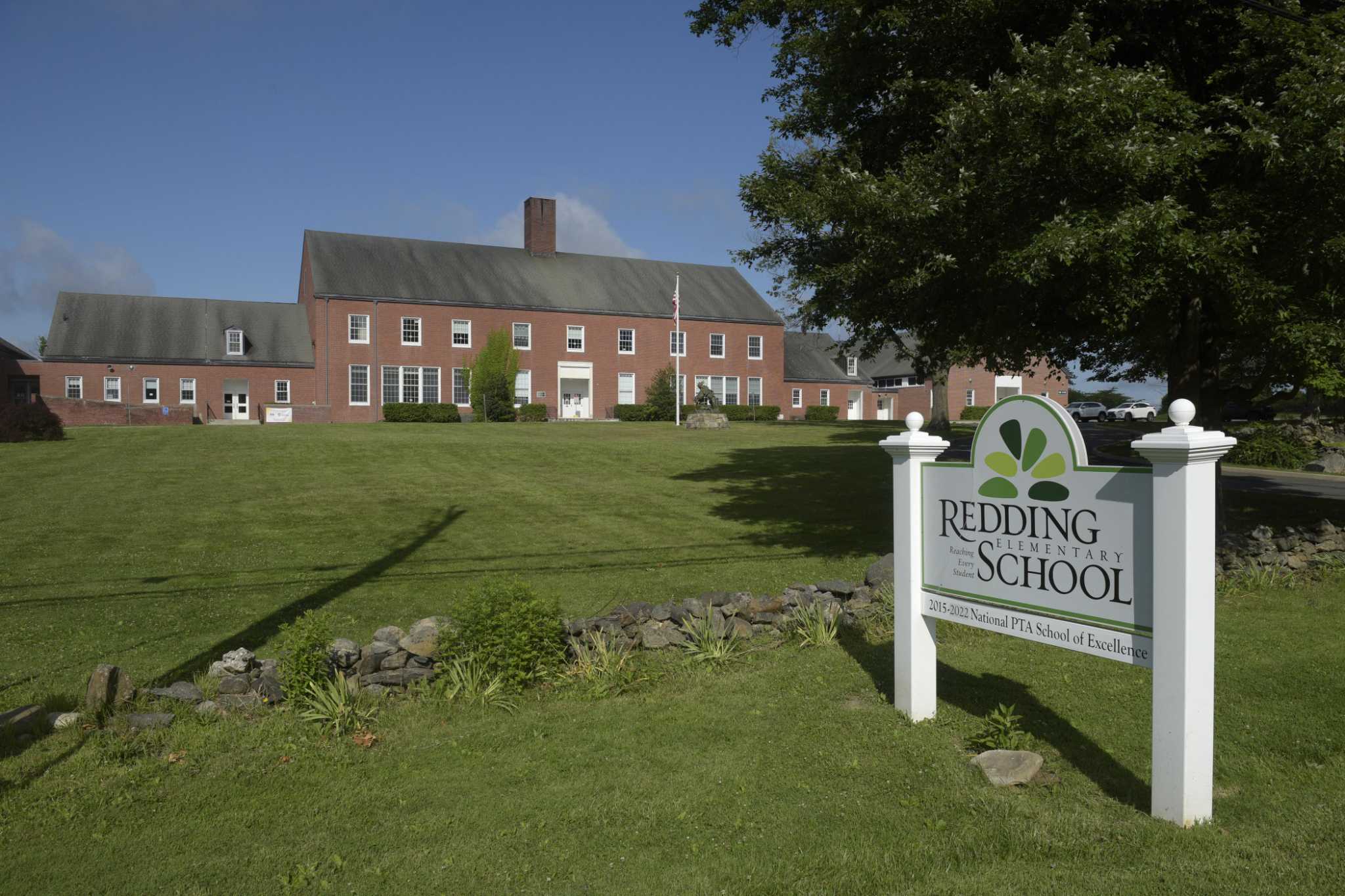 REDDING — When she saw the picture of the discolored water in the Facebook post, First Selectwoman Julia Pemberton said she was “horrified by it” even though the condition is found in many parts of town.

The picture in question — posted to a community social media page on June 17 — shows an inflatable pool filled with dark red and brown water for field day at Redding Elementary School. The discoloration is a result of high iron levels in the school’s water system, according to officials.

“We have very high iron content in our water in many areas of Redding. Town Hall’s water is not potable,” Pemberton said. “If you leave a cup sitting with any of the water in it, when the water evaporates, what you are left with is a dark mineral stain, like a black.”

School officials have known about the high iron content in Redding Elementary’s water for more than four years; but it was not until a week before the field day event and the Facebook post that any action was taken to correct it.

Jason McKinnon, superintendent of the Region 9 school district, acknowledged “the color of the water at field day,” according to a letter he sent recently to the Redding Elementary School community.

He said the district would tackle the project. The Board of Education voted earlier this month to direct his office to prepare a proposal requesting $32,000 of the town’s allocation of federal COVID-19 pandemic-relief to install a new water filtration system at Redding Elementary School, according to his letter.

“For the past several years, there has been a high iron content in the water at [Redding Elementary School] which produces a red color. Staff and students drink bottled water, and the board has spent money in our budget each year to clean and rinse the water storage tanks.” said McKinnon, who became superintendent last October.

“We frequently test water quality and provide bottled water where needed,” he added.

At a Redding Board of Education meeting June 6, McKinnon explained how, in 2017, school officials learned of water quality issues at Redding Elementary School.

A March 2017 correspondence sent to the Redding Board of Education from the state Department of Public Health, or DPH, documented “significant deficiencies” in the school’s water-filtering systems.

“The school has experienced discolored water events and as a result has been on bottled water,” DPH said. “This office believes that part of the problem is that the water is treated after storage.”

“A much more common practice is to treat [the water] before and then store ‘clean’ water in the tank,” DPH said. “This avoids the concern of slugs of iron and maganese sediment being periodically released into the distribution system.”

Based on the information, “a recommendation was made at that time for a new water-filtration system,” McKinnon told the Redding Board of Education earlier this month.

“I expect the project will be completed this summer, and we will test water quality before the start of school,” he said.

Redding Public Health Officer Douglas Hartline said Wednesday the high levels of iron are “naturally occurring” and said the water in the schools is “treated with iron removal units and it has been going through filters for a long time.”

“The water is drinkable,” he said. “Whether they use it or not is entirely up to them.”

Chris Parkin, chair of the Redding Board of Education and a member since 2017, said in an email Wednesday, “The iron content at RES is a known issue, and the board authorized the administration to seek funding to remedy it earlier this month.”

He said he could not say how long the “iron content” at the school has been a “known issue,” adding, “I don’t know without researching the issue and don’t want to guess.”

“[Redding Elementary School] has used bottled water exclusively for drinking and cooking for several years and will continue to do so,” he added. “I’m not familiar with the health department’s view on treatment … and I can’t comment on what makes water potable or not.”

According to minutes of Redding Board of Education meetings, school officials became aware of water quality issues in 2017 when it hired a consulting firm, Leggette, Brashears & Graham.. For $13,500, the firm completed its water-quality analysis at Redding Elementary School and John Read Middle School.

The Redding Board of Education’s Facilities Planning Committee reviewed the firm’s final analysis in August 2018 and “advised that remediation actions should be considered against the cost/benefits of continuing usage of bottled water.” It also “recommended professional evaluation of domestic water piping to assess potential for corrosion related issues and treatment options,” according to the committee’s meeting minutes.

The consultants found that the wells at both schools were contaminated with elevated levels of sodium and chloride that engineers said likely resulted from road salting, according to meeting minutes.

Obtained by the News-Times, a summary of the 2018 report into Redding Elementary School’s water quality shows the consulting firm found iron levels in the drinking water surpassed levels that affect its aesthetic, but not reaching limits that would make the water not potable.

Based on the investigation, the Redding Board of Education hired Ron Black of Watertown-based Water Systems Solutions and Designs Inc. as the school district’s “water system provider” in December 2019.

According to meeting minutes, Black maintained water systems for multiple districts, including the one at use at Joel Barlow High School. Nearly a year after he was hired, Black, who did not return a request for comment , presented an analysis of the water system designs at Redding Elementary and John Read Middle School.

In it, he “strongly” advised installing a “chlorination injection system” at the middle school to inactivate microorganisms, including bacteria and viruses, and recommended the school district drill new wells and to fund “quality and yield testing” at the existing wells.

In both schools, Black added, the design of the wells proved “inconsistent with the current codes and presents potential safety risks to technicians and staff servicing the equipment,” according to the minutes.

Later work performed at the middle school found a solution to the water-quality issues without requiring a new filtration system, but long-term recommendations to address the high iron content at the elementary school went unaddressed — creating short-term costs.

Proposed figures for Redding Elementary School’s budget for this school year lay out $7,600 for its “water system operating contract;” $8,900 for “bottled water and supplies,” $3,600 for “water system repairs,” and $2,200 for “water testing.”

At John Read Read Middle School, this year’s budget includes line items for $7,200 for “bottled water and water cooler rentals,” $3,900 for the school’s “water system operator;” and, complete with an itemized caveat of a “possible increase needed” to a $2,200 line item for “water testing.”

ARPA request in the works

Pemberton said she was “not pointing the finger at anyone,” over the Redding Elementary School’s water quality issue. But criticism directed at the town for not supporting capital projects to improve the schools is unfair, she said. Neither the town’s voters nor the Board of Finance have “ever turned away a capital project that improved the water quality at a school,” she said.

“Everybody likes to point the finger at the town and what you are seeing on Facebook is, well, the Board of Finance ‘nickels and dimes’ the schools, and that is simply inaccurate,” Pemberton said. “If these problems are not presented by the school board to the town for resolution — we can’t address them.”

“It is the job of the Board of Education to adopt a capital plan for their schools. This would include resolution of any water issues that require capital funding,” she added. “That is solely in their purview.”

For now, the school board plans to pursue a new filtration system for the Redding Elementary School, with a request to draw $32,000 from Redding’s allotment of federal pandemic relief funding.

The town received $2.7 million from the federal government under the U.S. American Rescue Plan, or, ARPA.

As of June 2, a total of $462,567 had already been approved for six projects, including two submitted by the Redding Board of Education for $30,000 to support the outdoor learning space at John Read Middle School, known as Project COOL, and $40,000 to repave a recreation area outside Redding Elementary School.

Seven other requests recommended for approval from the Board of Selectmen total $503,489, including a proposal from the school district to use $39,922 in ARPA funding for a “Region 9 HVAC Tower,” according to town documents.

Redding’s school district has other projects it hopes to submit through the town’s ARPA review, but McKinnon told the school board that the water filtration system for the elementary school is the most “shovel ready.”