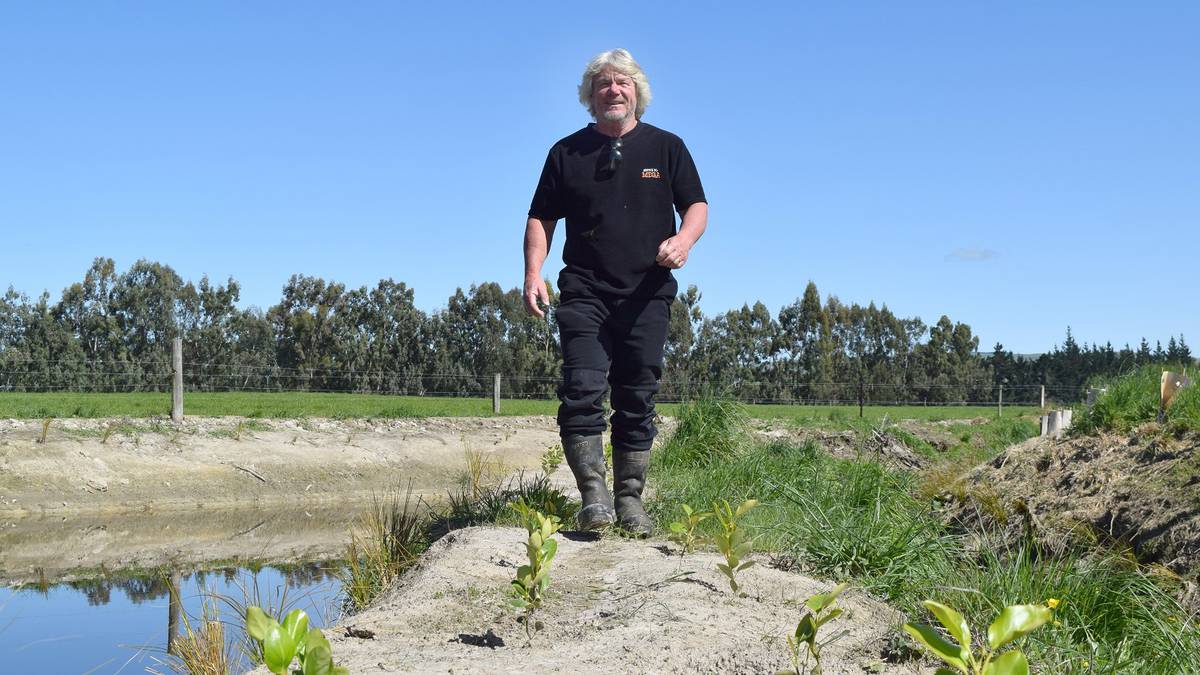 Dairy farmer Werner Marx launched a water quality project in West Otago during the busiest time of year. He talks to the Otago Daily Times’ Shawn McAvinue about co-investing in the project to protect his waterways, business and industry.

A map lies on a table in a dark room of a farm building in Kelso.

The only light comes from a lamp made from a modified milking cluster, shining down on the farm map.

The map details the location of farm infrastructure and the sizes of about 30 paddocks on the farm.

The line signifies a 1.5km section of an ephemeral stream – a tributary of the Pomahaka River.

A tributary of the stream also runs through a corner of his farm.

To address any impact his farm might have on the stream, he launched a freshwater project he designed on the eve of calving.

“I am the master of ill-timing.”

The first stage of the project was to replace fences near both waterways.

New fences were installed further out from the waterways to allow for bigger buffer zones and for “three layers of protection” of riparian planting.

A fast-growing green sedge, carex secta, was planted on the lower banks of the waterways.

Plants in the middle layer further up the bank include riparian grasses and flaxes.

The final layer of protection features trees including cabbage, kānuka, kōwhai and mānuka to shade the streams to cool the water.

Pomahaka Water Care Group helped pay for some of the fencing and riparian planting.

Marx then extended the project by paying for the installation of three sediment traps on his farm and replacing a bendy bridge his cows use, with a culvert and bund.

The next step for the project was to wait for the stream to dry out this summer and place aquatic plants, such as watercress, inside the sediment traps, in a bid to increase biodiversity in the stream including freshwater crayfish.

Dairy run-offs were upstream of his farm.

He would install monitoring devices at the entry and exit points of the stream on his farm to show if the project was having a positive impact on water quality.

“If anyone challenges what we are doing on-farm, we have hard facts.”

On the farm, 265 crossbred cows were milked.

About 75 per cent of the herd were only producing milk with a2 beta-casein.

He hoped the rest of the herd would do the same in the next two years.

He had heard of the a2 Milk Company giving grants to co-fund environmental projects of farmers who supply milk under contract to Mataura Valley Milk.

He never dreamed his project would qualify for one of the 15 grants of up to $35,000 the a2 Milk Company was making available in the inaugural year of its New Zealand Farm Sustainability Fund.

The grants were given to recipients demonstrating an integrated approach to a sustainable future, enabling positive and meaningful impact across the community and the environment.

At a function, he got chatting with a2 Milk Company executive leadership about his project and was encouraged to apply.

“I was grateful for that because it went a long way – a long, long way.”

Funding application needed to be in smartly after he was encouraged so he pulled an all-nighter completing the paperwork.

To apply for funding, the project needed a name.

At 4 am, he coined the project Operation Clearwater.

With or without funding, he was always going to stump up to complete the project but the best part of this story was a farmer, dairy processor and the Government, via a water care group, uniting to co-fund a project to accelerate it and make it bigger and better.

“This is a successful project, no matter how you look at it.”

The money he invested in the project could have been spent elsewhere on his farm, such as replacing a broken quad bike on his 160ha runoff in Southland.

“Doing this you have to forego other things.”

He wanted to do the project but his motivation for it was similar to that of taking out an insurance policy.

Farmers needed to be proactive to stop more rules from being forced on them, he said.

“It’s a little bit sad as a farmer you feel like you have to fight a rear guard action.”

He preferred the use of a “carrot rather than a stick” to allow groups to work together to achieve positive outcomes for New Zealand’s biggest export earner.

“You don’t want to kill the goose which lays the golden egg but at the same time it has got to carry its weight and as farmers, that’s our job and we’re doing it.”