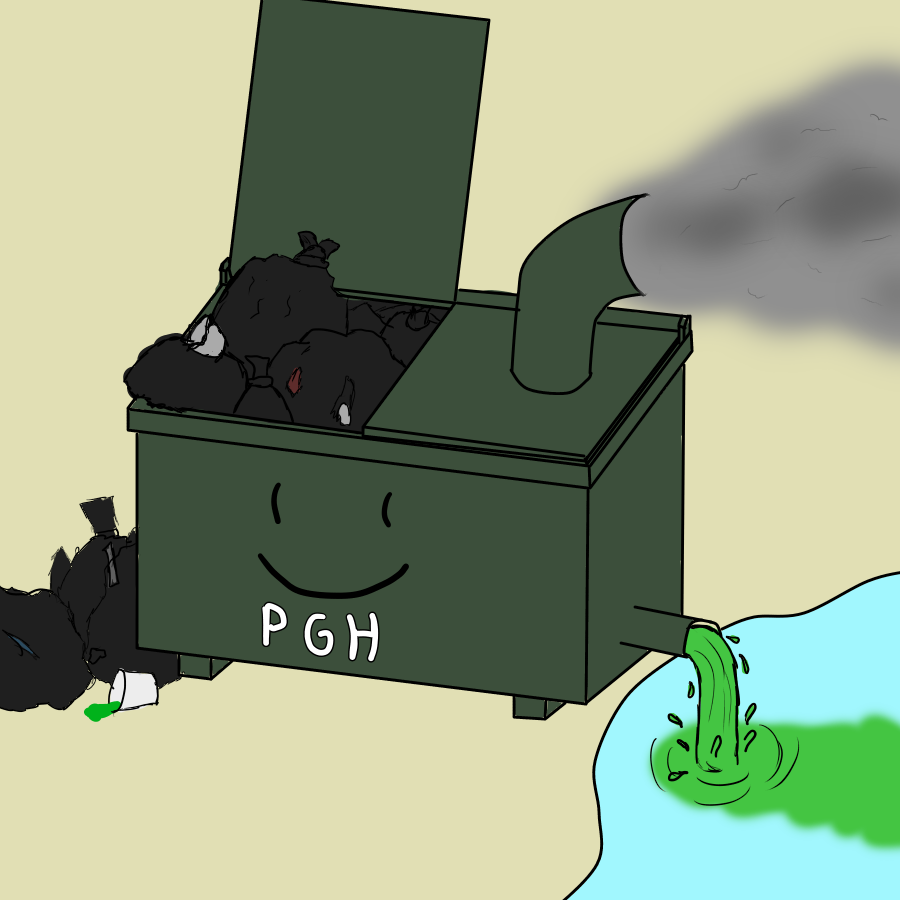 Trash cans are overfilled, spilling out and covering the streets in plastic. We trek through the debris of garbage and soggy cardboard boxes in the streets of South Oakland to get to class. Broken glass shines in the sun and you’re careful not to step on it, but you can’t escape the smell of the sewers’ mist releasing burning garbage and feces. This is the physical reality of our Pittsburgh campus, and we helped make it this way.

When I think of health, I think of two camps — the aspects of our health we as individuals can control and the factors we cannot. For instance, we can control what we eat and if we exercise. We can’t realistically control our air or water quality as individuals, or large-scale pollution levels. Unfortunately, however, the factors we can’t control might have the potential to be the deadliest.

Pittsburgh’s 2021 water quality reports from PGH2O showed that levels of copper and lead are within the acceptable range for federal and state guidelines. Pittsburgh’s water supply relies on the Allegheny River, which is treated and disinfected at a treatment plant. However, pollution from stormwater often goes untreated. The Allegheny River isn’t just used for our city’s water, but also for public swimming, boating and other outdoor activities. So if you litter or pollute the river, it can affect the entire city.

Unlike newer cities, Pittsburgh’s sewer system has the Allegheny River, stormwater and sewers all combined. Only 25% of stormwater sewers are separate, meaning that the majority of water pollution from stormwater is mixed in with the water we use domestically. As I mentioned before, the stormwater pollution often goes untreated, meaning that there are still contaminants entering our water. The pollutant levels may not be high enough for authorities to take action, but that doesn’t mean pollutants in our water don’t have the potential to affect us.

One pathogen present in our Pittsburgh water is the parasite Cryptosporidium, commonly known as crypto — and no, don’t confuse it with the currency. Although filtration is supposed to remove this parasite, PGH2O admits that it cannot guarantee that it all is removed. Crypto infection is the leading cause of waterborne illness in the United States. For immunocompromised people, this could be life-threatening.

To avoid illness, do not drink Pittsburgh water straight from the tap. Use a secondary water filtration system. Alcohol sanitizers aren’t able to kill crypto, according to the Center for Disease Control, so soap and proper hygiene are the best methods to prevent illness.

In Pittsburgh, the air quality bracket in 2021 was in the moderate range. So Pittsburgh air quality is pretty good, right? Wrong. Pittsburgh’s 2021 particle matter index was still higher than the World Health Organization’s safe level recommendations.

Particle matter has different sizes. If PM is a size 10, that means the particles are big. This includes dirt, dust and other particles we can see with the naked eye. The CDC says these can irritate our eyes, nose and throat, yet they’re not extremely worrying. It’s the small PM, 2.5, that we have to worry about. PM2.5 is microscopic, which makes it even more dangerous to our health. These particles can contain ammonia, sulfur, black carbon and other dangerous inhalants like asbestos.

These tiny particles can easily embed into our lungs and bloodstream, polluting our bodies from the inside. These particles can come from sources such as construction — which Pitt seems to be doing nonstop — as well as small things like backyard fires or unpaved roads, according to the United States Environmental Protection Agency. Lack of clean air is an issue that affects us all, yet low-income areas in Pittsburgh are at a much higher disadvantage.

Pittsburgh’s 2021 PM2.5 index was higher than the WHO recommended amount, meaning that residents could be at an elevated risk for developing possible heart or lung conditions from exposure. People who already have pre-existing respiratory illness or heart disease are at an even greater risk.

The CDC recommends staying inside when levels are high and avoiding busy traffic areas. Incense burners, candles and other things that you burn can also contain PM2.5 pollutants. So, the general advice is to avoid lighting anything on fire. Sorry to all candle lovers and pyromaniacs.

Pittsburgh also has a problem with environmental racism. Like so many states in America, Pittsburgh was redlined during the 1920s and 30s. Even to this day, Pittsburgh is still experiencing the effects of redlining. The Pittsburgh Neighborhood Project aims to provide information about specific areas of Pittsburgh that experience high or low risk of environmental racism and disadvantage. The Pittsburgh Neighborhood Project describes the word “disadvantage” by the number of risk factors and challenges an area faces, which includes the number of low-income residents below the poverty line, reported violence, unemployment and more.

Disadvantaged areas, including certain parts of Pittsburgh, are more subjected to environmental racism due to the high population of low-income families and the generational effects of redlining that affected people of color. Disadvantaged areas are more likely to experience obstacles such as a lack of clean air, poor water quality, gentrification or even displacement. Either way, there is a correlation between disadvantaged areas and health and safety.

Pollutants in water and air and a lack of green spaces all contribute to factors of our health that we do not have agency over — and are all unfortunate fixtures of our city. The sad reality is that no matter how much someone focuses on health, Pittsburgh makes this more difficult. Accessible and equitable healthcare is already an issue in America. People in disadvantaged areas or those living below the poverty line experience more of a need for care, yet they often cannot receive adequate or affordable treatment.

So next time it’s garbage day in Oakland or when the weekend comes around, be mindful of where you put your trash. It has the potential to end up somewhere that hurts us all. We might not have the power to completely stop Pittsburgh’s pollution, but we do have the power over our individual actions. It’s time us college students started taking care of our city — or at least not make it worse. Even though most of us may be here just for undergraduate careers, we need to stop thinking of this city as a temporary home.

Lynnette Tibbott primarily writes about topics in the sciences and humanities. Write to her at [email protected]