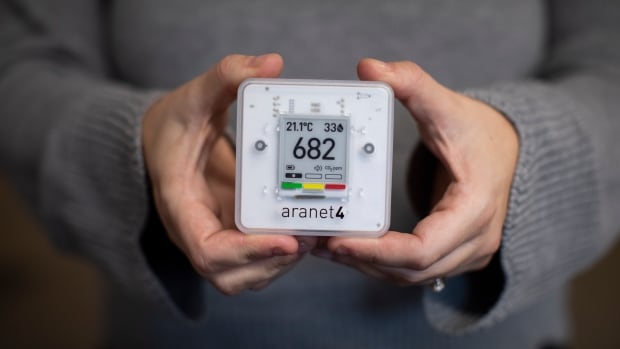 The Ottawa Public Library is lending 28 handheld carbon dioxide (CO2) detectors to cardholders so they can check ventilation inside homes, workplaces or any other space, and potentially improve air quality to battle airborne infections.

Higher indoor carbon dioxide levels — and less fresh oxygen getting in — can lead to a higher risk of airborne infections, according to the library. Poor air quality itself can also lead to fatigue, headaches and a sore throat.

Under 600 parts per million is considered excellent, while more than 1,000 is poor.

These handheld devices given out by the library are different than the carbon monoxide detectors that warn of an increase in the dangerous gas that has no smell, taste or colour.

As of Thursday morning there were 170 holds on the Ottawa library’s 28 CO2 detectors. They can be borrowed for up to 21 days with a $325 fee if they’re lost or damaged.

Archer said these devices are the latest step in a strategy to buy and make available more expensive devices. Aranet is selling them for $249 US, or about $340 Cdn.

“We’re recognizing the library has a role in some more expensive tools, items, pieces of equipment … It’s giving people an opportunity to test these things if they can’t afford it, or if they want to test it before they buy it,” she said.

Archer said the library’s thermal cameras (228 holds on 72 devices) are another expensive piece of equipment available to loan, where people can check how their home’s insulation is working.