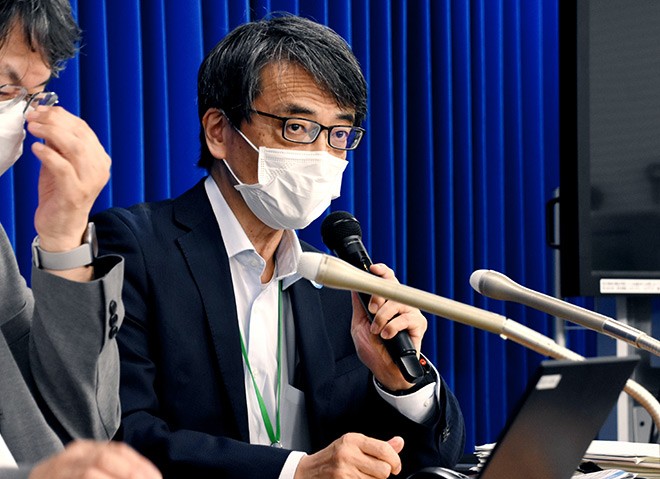 A panel of experts advising the health ministry on COVID-19 procedures recommended looser controls on medical and elderly care facilities to ease their daily workloads now that the worst of the crisis seems to be abating.

Noting that patient numbers have dropped sharply in recent weeks, coupled with past findings about how the novel coronavirus spreads, the panel called June 8 for doing away with excessive disinfecting measures, such as frequently wiping handrails and doorknobs, or covering elevator buttons.

COVID-19 does not present a high risk of being spread through contact with objects that patients may have touched, according to one finding.

The panel said regular medical face masks were up to the task of keeping medical staff safe from infection, rather than the highly efficient N95 version that some wearers complain makes it harder for them to breathe.

It also said medical and care staff did not need to wear aprons and gowns if they were only asking patients about their condition or taking their temperatures and not coming in physical contact.

While many medical facilities have set up special zones for COVID-19 patients in different wings, the panel said it was now possible to move to a more flexible approach that would allow separation in hospital rooms.

Visitors to elderly care facilities would be allowed as long as they wore face masks, came in small groups and stayed for only a short time.

Likewise, hospitals will be allowed to let in visitors for certain patients, such as those in the pediatric ward or expectant mothers.

According to sources, the panel initially wanted to extend the relaxed measures to those in close contact with COVID-19 patients.

One proposal was to do away with current close contact protocols. Such individuals are required to self-isolate at home, but the panel suggested lifting the self-quarantine requirement for those who had received booster shots.

Another proposal was to allow those confirmed with COVID-19 to leave home for short periods while wearing face masks if they showed no symptoms after five days.

But health ministry officials urged further discussions on the topic rather than include those proposals in the recommendations released June 8.

The panel, a high-ranking ministry official noted, was set up to base its discussions on accumulated scientific knowledge rather than make decisions about the extent to which new COVID-19 cases should be allowed in exchange for allowing greater economic activity and pedestrian traffic.

While the ministry panel came up with its recommendations, another body of experts advising the government, including those knowledgeable about economic issues, has not met since May and vast differences in opinion remain among the panel members. That has delayed discussions about further relaxing various infection-prevention measures.

(This article was written by Yuki Edamatsu and Kai Ichino.)