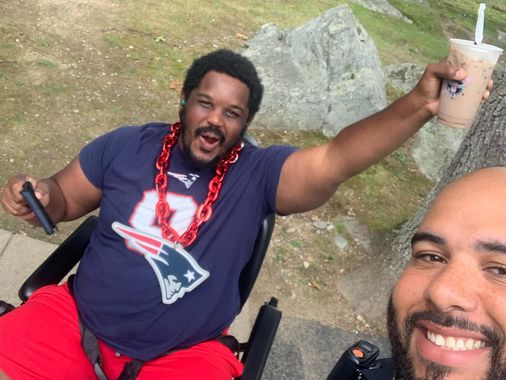 Every day, police officers respond to reports of all sorts of events and nonevents, most of which never make the news. Here is a sampling of lesser-known — but no less noteworthy — incidents from police log books (a.k.a. blotters) in our suburbs.

A situation that could have ended tragically unfolded last Sunday, the day of the New England Patriots’ season opener, when a Patriots fan in a wheelchair got stuck on some train tracks in Holbrook. Unable to move his wheelchair off the tracks, the Pats fan found himself in a rather precarious — and downright dangerous — position. Officers were dispatched to the scene to help, and when they arrived the man, who lives in Randolph, already was out of harm’s way, thanks to the assistance of a couple of good Samaritans who stepped in and helped get him off the tracks. The man was wearing a New England Patriots jersey (natch) and told police he was trying to get to Marylou’s coffee shop when he got stuck. Officer Justo Pagan then went the extra mile and made sure he got his coffee before the game started. Holbrook police shared a photo of Pagan and the Pats fan on social media. “Crisis averted on the train tracks today,” the Facebook post said. “The gentleman from Randolph said he was trying to get to Marylou’s when he got stuck. Officer Pagan assisted this gentleman by getting him a Marylou’s coffee before the Patriots kick off today!”

At 5:39 p.m. Sept. 6, a man walked into the Bridgewater police station and told officers that he may have fallen victim to a real estate scam. He said he worked with an online realtor to buy a home, and when he went to his newly purchased property, he got a surprise. He told police he was inside the home cleaning when the actual realtor showed up and told him he had, in fact, not purchased the home. Police said the incident is under investigation.

IS THAT A GUN I SEE?

At 8:48 a.m. Sept. 1, Norwood police received a call from a landlord on Katie’s Way who said there appeared to be a firearm sitting on top of a pile of debris that had been left behind by outgoing tenants. According to the log entry, police were dispatched to the property to check it out, and the responding officer reported that there was nothing to be worried about, because it wasn’t a real weapon; it was just a toy. In order to quell any future concerns, the officer “threw it away in a better spot.”

NO CAUSE FOR ALARM

At 1:54 p.m. Aug. 25, Wilmington police received a call from a concerned citizen who reported seeing a dog in a car in the Red Heat Tavern parking lot. The caller was concerned for the animal’s well-being, given the 90-degree temperature outside. The log entry stated that police showed up at the scene and found the vehicle in question. The responding officer subsequently reported that “it is a stuffed animal dog, not a real dog.”

ROOSTER ON THE LOOSE

Social media has become a great tool for reuniting lost pets with their owners. Many animal control officers and police departments use Facebook to post photos of missing pets of all kinds. Back in July, a rooster was found roaming in the area of Campanelli Drive in Andover, where the town’s department of public works is located. Andover animal control posted a picture of the rooster and asked if anyone recognized it. “This guy has been hanging out at the DPW since early this morning,” the Facebook post said. Sooner after that, the post was updated with the good news that the rooster’s owner had been found: “***UPDATE*** The rooster is back home! Thank you to everyone that shared this post!”