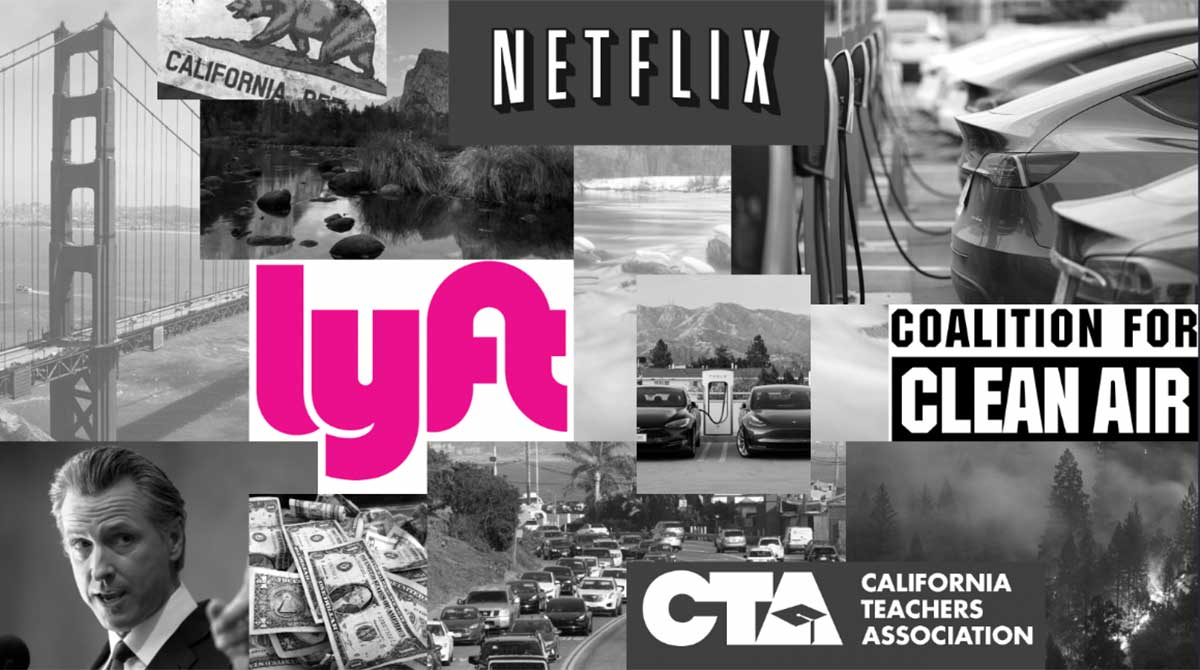 During October, donations aimed at defeating Proposition 30, a tax on the wealthy to subsidize electric vehicles in California, topped $14 million. As recently as the end of August, less than $1 million had been raised to fight the proposition.

And as funding for opposition to Prop. 30 has increased exponentially, the chances that voters will pass the proposition have shrunk, polling indicates.

Whether the late spending against the proposition was the driving factor in the shift in the polls is unknown. But there’s little doubt that the overwhelming support for the measure by ride-share company Lyft has backfired, said David McCuan, a professor at Sonoma State University who studies campaign spending.

“It is unusual that a company gives so much to one ballot measure,” said McCuan. “It actually harms the brand … As soon as (opposition) says ‘the Lyft grift’? Boom, done. Because it’s short, it’s sweet, it’s compelling.”

Though polling results indicated the proposition would pass as recently as September, an October poll conducted by the Public Policy Institute of California (PPIC) now shows only 41% of likely voters voting yes on the measure. PPIC declined a request for an interview for this article, but suggested McCuan for questions on campaign finance.

The change in public sentiment takes place amid a last-minute rise in opposition funding and persistent messaging from Gov. Gavin Newsom and the California Teachers Association (CTA) that depicts the proposition as a Lyft corporate bailout.

As of the end of October, the total amount of money given to the No on Prop. 30 campaign committee has reached at least $22.4 million. The CTA, the state’s powerful teacher’s union, has donated $4.5 million in the last two weeks, and Netflix CEO Reed Hastings donated $1 million to opponents of Prop. 30 at the end of September.

Even with those donations, opponents of the measure have still raised less than half as much as the supporting side. $48 million has been raised in support of the proposition, with 95% coming from ride-sharing company Lyft. But only some $800,000 of that was raised in October.

“Fundraising is very expensive. But if you look at the ‘No’ side, they have 30 billionaires that have donated to their campaign,” said Steven Maviglio, a spokesperson for the Yes on 30 campaign. “We don’t have that base of people that would rather not pay taxes than clean the air,” he added.

Meanwhile, No on 30 campaign manager Matt Rodriguez suggested that growing questions about Lyft’s motivations are a key driver of the changing sentiment towards Prop. 30.

“These measures look good when you’re barely paying attention in July or August, but they look different when the voters really start to zone in on what the motivations are behind them in October and November,” Rodriguez said.

Prop. 30 is the brainchild of a coalition of environmental and transit equity organizations, including the Coalition for Clean Air, a nonprofit focused on promoting socially and environmentally responsible policy.

The proposition would increase the personal income tax on income over $2 million by 1.75% and is estimated to raise between $3.5 and 5 billion every year. The vast majority of the money would go toward zero-emission car tax incentives and charging stations, with a special focus on low- and middle-income Californians. Another 20% would go to wildfire prevention and firefighter training.

The San Francisco Bay Area Planning and Urban Research Association (SPUR), TransForm, and Move LA came together in early 2020 to draft a climate and clean air measure focused on the two largest sources of air pollution and greenhouse emissions in California: wildfires and tailpipes.

Lyft got involved in late 2021 — nearly two years later — when the organizations were looking for funders to back the measure. Critics argue that Lyft has poured $45 million into the proposition in order to subsidize their pledge to transition all cars in their fleet to electric vehicles by 2030.

“Lyft can talk about how it helps all these programs, but I think as voters have started zoning in on it, number one, they don’t like the fact it’s a massive tax increase. Number two, it’s a massive tax increase when there is a hundred billion dollar surplus,” said Rodriguez from the No on 30 campaign. “As they start to realize that one company’s basically funded the entire thing, I do think that calls the motivations of the Yes folks into question.”

Nick Josefowitz, director of policy at SPUR, disagrees. He states that Lyft is far from the primary beneficiary of this proposition.

“Right now, existing state and federal programs will help low-income Californians purchase a ZEV (Zero-Emission Vehicle), and they help all low-income Californians who want to do that, regardless of whether they drive Lyft,” Josefowitz said. “Proposition 30 doesn’t change that. Proposition 30 basically funds existing programs to the level which they need to be funded to scale this transition to zero-emission vehicles. It doesn’t have any carve-out for Lyft, Lyft drivers, or any other industry.”

With fewer than 2.5% of vehicles in California on the Lyft platform, according to Josefowitz, a minimal amount of funds would go to Lyft drivers.

Policy director of Coalition for Clean Air, Bill Magavern, thinks that opponents are using Lyft’s involvement as a reason to “object … and they know that clean air and fighting wildfires are popular. They know that taxing the ultra rich is popular. So that’s why they’re attacking Lyft.”

When Lyft was reached for comment, they pointed to a Sept. 15 blog post by Logan Green, the co-founder and CEO of Lyft.

“Not a single dollar of Proposition 30 is earmarked for Lyft or the Ridesharing industry as a whole,” Green wrote in the post. “Ridesharing drivers will be eligible just like ALL Californians, but they won’t receive any type of priority or preference. In fact, over 50% of the EV funding must be directed towards low-income families to ensure the broad benefits of electrification are felt by all.”

In arguing against the proposition, California teachers say the money would cut into education funding. California income taxes typically go into the General Fund, of which 41% is always guaranteed to go to K-14 education. Though this would be a new stream of government revenue, it would be exclusively allocated to clean energy vehicles and countering wildfires and teachers argue this will make income tax increases less likely in the future, therefore cutting into a major source of their funding.

Rodriguez added passage of Prop. 30 would make tax increases harder to pass in the future. “You only get so many shots at a tax increase,” Rodriguez explained. “It’ll be that much harder to pass another tax increase in order to fund the entire general fund budget, including schools. This is very concerning — not just for teachers but for lots of groups in the state.”

Supporters argue these considerations are dwarfed by the urgency of climate change.

“We were never going to be able to secure enough money in the Legislature to land this transition to zero-emission vehicles as quickly as we need to in order to avoid catastrophic climate change. That’s why we put this measure on the ballot,” said Josefowitz.

“We don’t have an option to wait two, four, six, or eight years to start making these changes. Climate change is coming too fast.”

The scale of Prop. 30 campaign funding is large but not completely uncharacteristic for California ballot measures.

“Ballot measure campaigns in California are the second most expensive campaigns in the world (behind U.S. presidential campaigns),” said McCuan.

This story was produced by Big Local News at Stanford University.