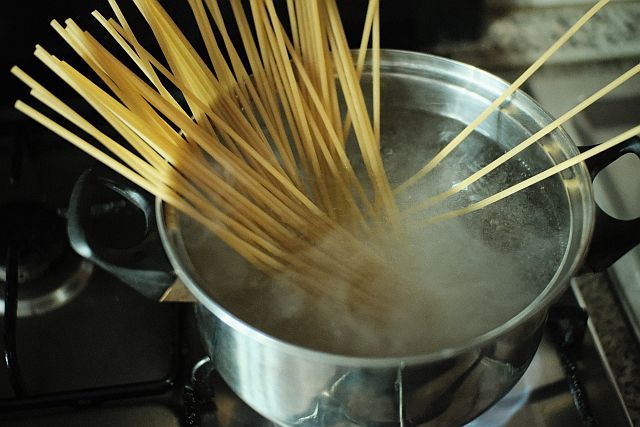 THERE’S an old kitchen myth that states that if you add some salt to water you will make it boil faster.

Be it pasta that’s on your menu, noodles, dumplings or whatever that requires a big pot of boiling water, adding salt to the water does not noticeably decrease the time for it to boil if you are planning on actually eating anything that you are trying to boil.

However, if you are not cooking and just want a big pot of boiling salt water, then yes, adding salt does decrease the time it takes to make it boil.

These two properties conflict and will work against each other unless the salt concentration is high enough to counteract the higher boiling point of salt water.

The reason this happens has to do with two phenomenons, the first one being boiling point elevation.

This phenomenon is also the reason why water boils at a lower temperature on the tops of mountains (where the atmospheric pressure is lower) compared to at sea level.

As for why salt lowers the heat capacity of water, salt ions in the water bonds with some of its molecules making it hard for it to move, or in this case, vibrate.

This means that more of the energy coming from the stove goes into the non-ion bonded water molecules making it get hotter faster.

Saying that, if you add enough salt into the water it will make it boil much faster.

However, this would be at concentrations that would make anything cooked in the water unpalatable.

Sea water only contains 3.5% salt concentration and boiling water with that concentration would only shave off seconds if compared to boiling pure water.

In order to see a significant difference in boiling time greater than a few seconds there would need to be an extremely high concentration of salt present in the water, likely over 20% which would not only make anything cooked in it inedible, it would be downright dangerous to your health.

So bottomline is, add salt to your water to give whatever you’re boiling some flavour, but don’t expect it to make your water boil faster.