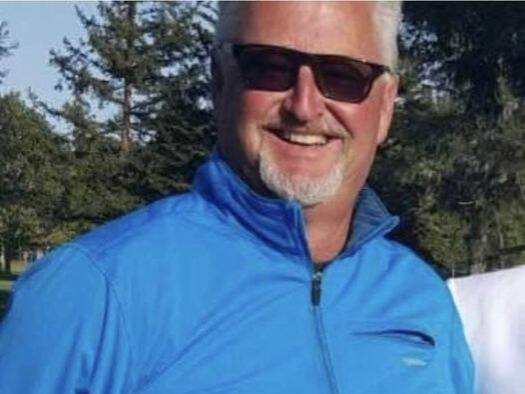 Ray Templeton was known for his work on the mic at hundreds of Montgomery Viking athletic events over the years.

So much so he earned the nickname “Mr. Montgomery.”

But he was beloved for the things many didn’t see or hear about: Work days to clean up the Montgomery campus, the planning of events to support all manner of Vikings’ activities, and the check-ins with friends and family just to see how they were doing, to show a little support.

“All the people who has helped and touched in his life, it’s one of those things you take for granted,” said Jason Lea, a longtime friend and fellow Montgomery graduate. “You take stock of that when someone leaves you.”

Templeton was stricken and collapsed while hiking with his wife, Tiffany, son Zack, and other family members in Colorado on Sept. 3.

People attempted to revive him, Tiffany Templeton said, but he died.

He wore number 55 on the football team and loved his high school experience. Those years inspired a lifelong commitment to supporting the school in ways both big and small.

He did game announcing for the boys basketball program for years until the girls team asked him to call their games, too. So he did.

Dean Haskins, a Montgomery graduate and the school’s longtime athletic director, said he’s spent countless winter nights standing next to Templeton in the gym as he worked the microphone game after game.

He’d arrive early so he could learn the names of the visiting team and get a handle on the contest he’d be calling.

He never took a Thanksgiving or winter break vacation — he refused to miss a game.

“If you asked him, he did it. If you needed something fixed, he fixed it. If you needed a ride, he gave you a ride,” Haskins said. “If we wanted to upgrade the trophy case, Ray was the first one there with a measuring tape figuring out how to do it.”

But it was his quiet generosity that moved Haskins the most.

In 2017, Haskins was dealing with lung cancer. When the wildfires struck in October, the air was filled with acrid smoke. It was dangerous for everyone, but especially someone with compromised lungs.

Haskins heard a knock on his front door. When he got there, no one was there but there was an air purifier on his porch.

“He texted me, ‘I just wanted to make sure you are safe, buddy,’” Haskins said. “And he got in his car and left. That was Ray.”

For longtime Montgomery girls soccer coach Pat McDonald, also a Montgomery graduate, Templeton was the guy who got things done. The things a lot of people don’t see, but notice when they are complete.

He pointed to the scores of banners and pennants that hang in Montgomery’s gym.

When the facility was getting an overhaul, it was Templeton who spearheaded a project to remove every banner, have them cleaned, and organize them chronologically before putting them back up.

“He just cared,” McDonald said. “He did the grunt work, all the behind the scenes work to make it a good experience for the kids.”

Friends say Templeton was constantly showing up for people, whether it was driving to Danville to watch a friend’s son play baseball, or doing a surprise Slurpee run for neighborhood kids.

“My kids called him ‘Uncle Ray,’” Lea said. “If something was going on in their life, it was ‘Uncle Ray will help me.’”

Templeton coached all three of his sons in a wide field of sports: soccer, basketball and baseball.

He had run Ray Templeton Auto Glass since 2013, but his heart was in volunteering.

But he knew how to have fun, friends said. In fact, he didn’t know any other way.

“He thought, ‘Life is fun.’ Seriously. That is no joke, if you were around Ray Templeton, you were having a good time,” Lea said.

A celebration of life will be held for Templeton on what would have been his 60th birthday: Oct. 9. It will be in Montgomery’s gymnasium.

“Ray would have hated any kind of sad affair and he loved his birthday,” Tiffany Templeton said.

You can reach Staff Columnist Kerry Benefield at 707-526-8671 or [email protected] On Twitter @benefield.