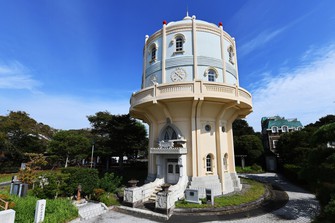 MITO — A pastel-colored water tower stands out near the former site of Mito Castle, where the Mito Tokugawa family — a branch of the Tokugawa shogunate — lived during the Edo period (1603-1867), in this eastern Japan city.

An intricate design is seen at the entrance of the Mito low-lying district water distribution tower in Mito, Ibaraki Prefecture, on Oct. 3, 2022. (Mainichi/Osamu Sukagawa)=Click/tap photo for more images.

The water distribution tower for low-lying districts in the city of Mito was completed in 1932. Along with another water tower serving districts on higher ground and the Ashiyama water purification plant, whose operations ended in 1993, the structure helped build the foundations of the modern waterworks system in the Ibaraki Prefecture capital. The reinforced concrete tower, measuring 21.6 meters in height and 11.2 m in diameter, was designed by water engineer Tsurumatsu Goto. The entrance is decorated in the Gothic style, and a balcony encircles the third floor. The facility was expected to supply drinking water as well as water for firefighting, so two reliefs of crossing fire hose nozzles adorn the wall.

Water was pumped from the Ashiyama purification plant, and the tower supplied water to low-lying areas, taking advantage of the height difference. The water tower for higher areas, which was demolished in 1999, was simply structured, with priority put on its function, so the two towers looked significantly different from each other.

The Mito low-lying water distribution tower is seen in Mito, Ibaraki Prefecture, on Oct. 3, 2022. The upper part of the structure holds a steel water tank with a 358-cubic-meter capacity. (Mainichi/Osamu Sukagawa)=Click/tap photo for more images.

The low-lying district water distribution tower was registered as a national tangible cultural property in 1996, but its operation was ended in 2000 for reasons including that the weight of water stored in the tower undermined its quake resistance. While the exterior was once painted a single color, the original colors at the time of construction were recreated in its restoration in 2006. 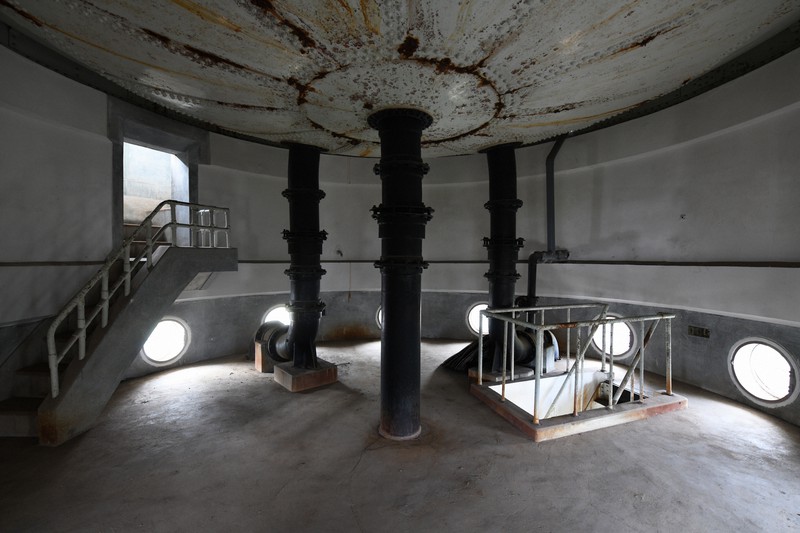 Round windows of the Mito city low-lying district water distribution tower are seen near the bottom of the second floor in this photo taken with permission in Mito, Ibaraki Prefecture, on Oct. 3, 2022. The bottom of the steel tank and three large pipes to send water are also seen in normally closed-off areas of the tower. (Mainichi/Osamu Sukagawa)=Click/tap photo for more images.

The Japanese version of this article was originally published on Oct. 30, 2022.