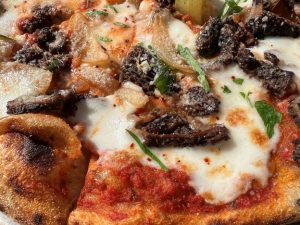 by the Ardent Gourmet

“Kidney of a horse, liver of a cat, filling up the sausages with this and that…”

Most Americans are fed up with fast food. Literally, fed up. That is to say, they stuff themselves with it like geese before a long migration.

But some are fed up, sick and tired. Thus, fast food begat Slow Food. Slow Food concentrates on local, sustainably, humanely grown food.  It prioritizes local kale from a small organic farm over kale, perhaps less expensive, imported from a mega farm in Brazil. It purchases from a nearby beef grower who treats their cows humanely, not from a far-away slaughterhouse scooping up pink slime from the floor (which they disinfect with ammonia) to sell as ground beef. It far prefers locally made bread, maybe hand-kneaded, using nourishing grains, over industrial white bread laden with a chemical found in yoga mats (Subway used to do this). Disdaining additives and preservatives, the food they make from unprocessed stuff requires serious culinary chops.

Slow food is not only an approach to cuisine though. It is a world view. If fast food is a fiberglass speedboat, slow food is a wooden sailboat.  It places sanctification – of food and how it’s made and those who make it and those who eat it and the entire web of creation – over obsessive monetization. The Salmonberry – Hyper Locally Sourced Food in Wheeler is an exemplar of this.

In Ted Lasso (Apple TV), a character says, “Soccer is life.” He’s wrong. Pizza is life. You won’t die without soccer but you’ll surely die without pizza, probably painfully. You had The Salmonberry’s wood-fired morel pizza. The beautifully blistered crust, which can sustain a longitudinal fold without drooping (so essential), had an artisanal crumb. You attribute this to the fact that its dough (by Wolfmoon in Nehalem) was fermented for three days with wild yeast (aka sourdough), akin to making Lambic beer but solid. The sauce from San Marzano tomatoes sang lyrically in countertenor. The Goatzarella cheese was a harmonic counterpoint with just a little funk. The morels were haunting notes of forest. You think of it with longing. 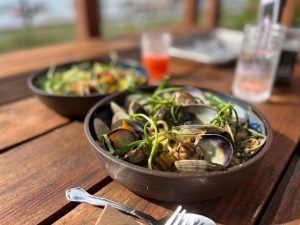 Pasta is merely a dumpling stretched thin. It is Flat Stanley. And because it’s stretched it has vastly more surface area than a dumpling of equal volume which makes it far more marriageable to sauce. The Salmonberry takes full advantage of this. Their housemade Bucatini – hollow spaghetti – is ideal. Made only from semolina flour and water (and incorporating a bit of dulse, locally grown seaweed), it is pliable and to the tooth, al dente, a quality difficult to achieve with fresh pasta. It’s served with clam sauce based on butter (which they make themselves from heavy cream), wine, lemon and tubby Willapa Bay butter clams. Garlanded with sea-purslane (a plant that grows on beaches just above the high tide mark with a puckery taste), it was more delicious than you thought the laws of physics allowed. 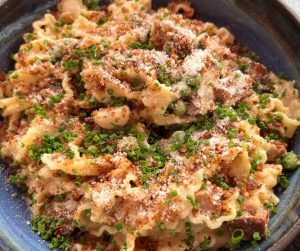 No less wonderful was their housemade Mafaldine – a pasta like a wide fettucine with a ruffled hem – served one night with ragu. The ragu was based on San Marzano tomatoes silkened with heavy cream. Your wife was worshipful. On another night it was married to a sauce of cream, peas, poached garlic, parmesan, and chunks of roasted pork belly. The dish was speckled with deep-fried red quinoa which brought a thrilling crunch to every bite. Only because your pleasure circuit-breakers repeatedly tripped as you ate these dishes were the two of you able to walk away without permanent damage.

After eating these pastas you were so impressed you went home and tried to duplicate them. For “Imitation is the sincerest form of flattery that mediocrity can pay to greatness.” 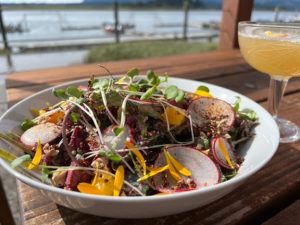 A beet salad with buttermilk dressing was a mélange of intensely flavorful baby greens and intensely flavorful cooked beets, all pulsating from the garden. It too profited from the beguiling crunch of deep-fried quinoa. Radish slices were dusted with crushed, roasted hazelnut. Your wife, who kidnaps vegetables from other people’s plates for a living, was joyous. 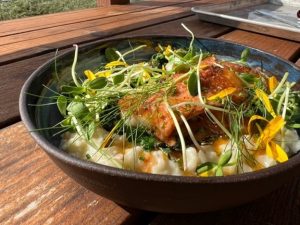 Rockfish over truffled risotto. Flying squirrels have been known to change direction mid-flight when they detect the smell of truffles. Though the scent of these locally foraged truffles was not as pungent as that from European truffles, it was still enough to make you change your flight path on the spot so you could nab it before your wife. The rockfish was fetchingly bronzed on one side, à point. But the risotto missed. It tasted oddly starchy, mushy. You speculate that it was batch-cooked and sat a bit too long before serving. It’s gratifying to know that truffles are being foraged hereabouts and that some folks are making a livelihood from it. The Salmonberry (not to mention other restaurants such as The Schooner in Netarts) is to be applauded for helping to pump the local food economy. 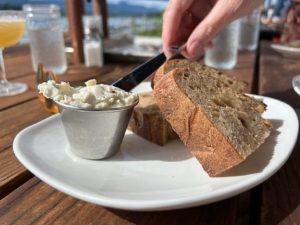 Dark grain bread is from Wolfmoon. It has an artisanal crumb and a lovely sour note. There’s goat cheese mixed with honey and herbs to spread upon it. Great, though you would have preferred it without the honey, the better to savor the mild cheese. 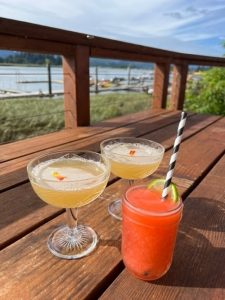 “There’s nothing more political than food,” said Anthony Bourdain. And so The Salmonberry spells “cocktails” “coctails” to express feminist sentiment. Some might say this is cockamamie. But scoff not, just taste one. Their smoked strawberry margarita slushy which sounds terrible is outstanding. It is far more than a confection. It just works. Likewise great is their Ibis Daiquiri which lets the flavor of the rum, so often obscured, come through. May all coctails be so good.

One night you split a bottle of Ostatu Rosado 2020 rosé, bright, dry, summery, plump with fruit. There’s something about lifting a beaded wine bottle from a beaded wine bucket that always flutters your heart.

Service is unique in the manner of some old-fashioned cafeterias you’ve known where first you place and pay for your order and then find your seat where it’s delivered. You bus your own table. This works okay but not great. Food comes at random intervals, long or all at once, which makes for lumpy pacing. Halfway in you wanted another round of drinks but the long line at the cash register made this difficult. At the end of the meal you decided you wanted dessert after all but the line was simply too long to make this happen. But the inconvenience is nothing really, trivialized by the stunning food and the beautiful view at water’s edge. Sit on the deck if you can. 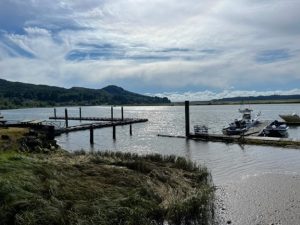 You saw families in the restaurant with happy kiddles. You saw heartthrobs holding hands. A gent sat by himself on the deck communing with the water, pizza, and a pint. It’s a relaxed, inclusive place with a kind spirit. Fair prices.

The Salmonberry aligns with a time when food was made from the back garden. It has a strong Italian inflection, mainly exploring the sorts of food you might find in traditional village restaurants or from fine home cooks. So many restaurant menus are largely static which can make their cooking feel rote, stultified. But given their hyper local mandate The Salmonberry must nimbly change its menu often. Surely this challenge has helped to spur the chefs to their highest powers. 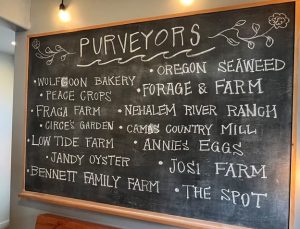 Zealously committed to local food, farmers, and food makers, The Salmonberry – Hyper Locally Sourced Food is hyper delicious. And that is not hyperbole.

You can see this review and other reviews by the Ardent Gourmet at www.ardentgourmet.com

The Ardent Gourmet – Restaurant, Hotel, and Travel Reviews – NOW, On the Pioneer!