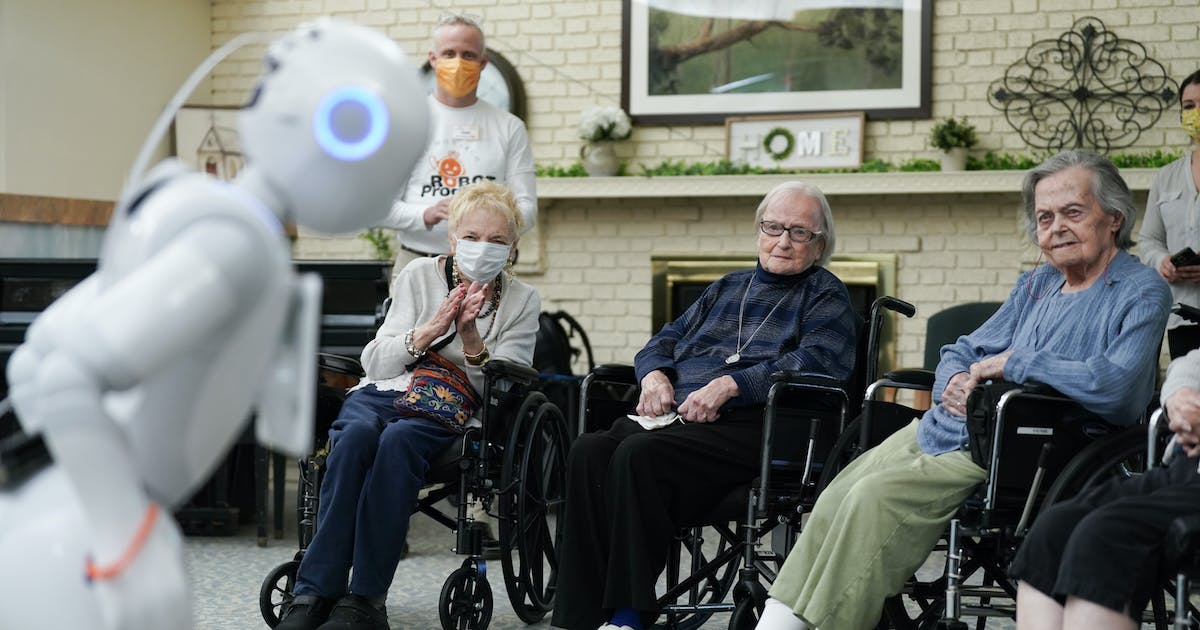 Pepper the robot is programmed with hundreds of jokes, and if you don’t believe it, just ask her. The residents of the Estates nursing home in Roseville sure did as the robot made its national debut as a personal care assistant.

“Do you want to hear more jokes?” the robot asked.

“I went on a date with a Roomba last week,” the robot said. “It totally sucked.”

Good thing the upright, 4-foot-high robot isn’t giving up its day job, which from here on will be to interact with residents, remind them to eat and exercise and react to their facial expressions or tone of voice.

Pepper is one of two robots introduced at the nursing home by researchers from the University of Minnesota Duluth, along with a 2-foot-high robot called NAO designed to lead residents in group exercises and dance routines. The goal is to provide technological support to a nursing home industry that is seeing more residents and more complex cases of dementia at a time when it is losing staff and expertise, said Arshia Khan, a UMD computer science professor.

“If we don’t look for alternative solutions and think outside the box, our elders will suffer,” Khan said.

UMD researchers have been preparing for years to modify the SoftBank Robotics machines for use in nursing homes, but they accelerated the timing amid the pandemic. Isolation protocols to protect highly vulnerable nursing home residents reduced their social interactions, accentuating how robots could make a difference, Khan said.

“Humans can spread infection easily,” Khan said, “and robots, once you disinfect the robots, you can send them from one person to another without the fear of infections.”

As designed, Pepper will independently roam the nursing home and approach residents to see if they have health concerns or need company. Facial recognition software allows the robot to talk with residents by name and even detect their moods. Wristbands on residents send wireless biometric data to the robot, which can then detect when the residents are off their eating or sleeping schedules, laboring to breathe or feeling sad.

“Would you like to revisit some of your memories from the past?” the robot said Wednesday, giving a demonstration of its reminiscence therapy mode. When uploaded with pictures and information, it can help residents remember some of their favorite moments and augment them with favorite songs.

“Graduation,” Khan said, picking from a menu of memories on Pepper’s screen.

“Great,” Pepper replied, its black eyes widening to convey enthusiasm. “You were such a great student. Remember the day of your graduation?”

UMD’s team includes nurses, psychologists and ethicists, who addressed the social concerns about introducing robots to take on sometimes personal and intimate caregiver roles. A guiding principal was that the robots provide new social outlets, but not at the expense of face-to-face human contact.

“It’s not replacing employees or reducing the need for human touch or human interaction,” said Dan Pollock, assistant commissioner of the Minnesota Department of Human Services. “It’s adding something that has the potential to improve lives and maybe take over some very mundane things like reminding residents when it’s time to eat or go to the bathroom or that kind of thing.”

The NAO and Pepper robots will soon be placed in seven additional nursing homes in Minnesota operated by Monarch Healthcare Management. A $2 million grant from the Department of Human Services hastened their deployment.

Robots can offer reminders to residents to eat or put on masks without getting frustrated or raising their voices. Khan said they also can talk about the old days with residents without ever getting tired — but for the need once a night to retreat to their self-charging docks.

“I went into Starbucks the other day, and one of the baristas asked me if I wanted any coffee. Can you believe that? Me,” the robot said, opening its palms to convey surprise. “I said, ‘No, I don’t need coffee. I’m already completely wired.’ “

Laughs and groans filled the room.

Sometimes Pepper’s high-pitched voice made the punchline hard to hear, leaving only the robot laughing. Other times it struggled to hear a response when it asked if it should tell more jokes.

Khan said adjustments will be made as needed and that the robot’s use of sensor data to respond to individual resident needs would be phased in over the next week.

Nursing homes in Japan have been more aggressive in using robots to augment care services, but they are growing in use among U.S. facilities as well. Monarch has tinkered with service-oriented robots that deliver drinks to residents and clean the floors.

Personal interactions between staff and residents should become more meaningful if the new robots can take on menial tasks, said Dan Strittmater, Monarch’s vice president of operations. If the NAO robot can lead group exercises, then staff can work closely with individual residents who need help with the movements. Or they can be down the hall addressing other residents’ needs.

“I want to put them to work for the staff so that the staff can have higher quality face-to-face contact with the residents,” he said.

Resident Mary West enjoyed the robot’s jokes and was looking forward to testing its level of personal interaction.

“I’m excited just to talk to her,” West said, “tell her all about my kids and hope that she remembers.”