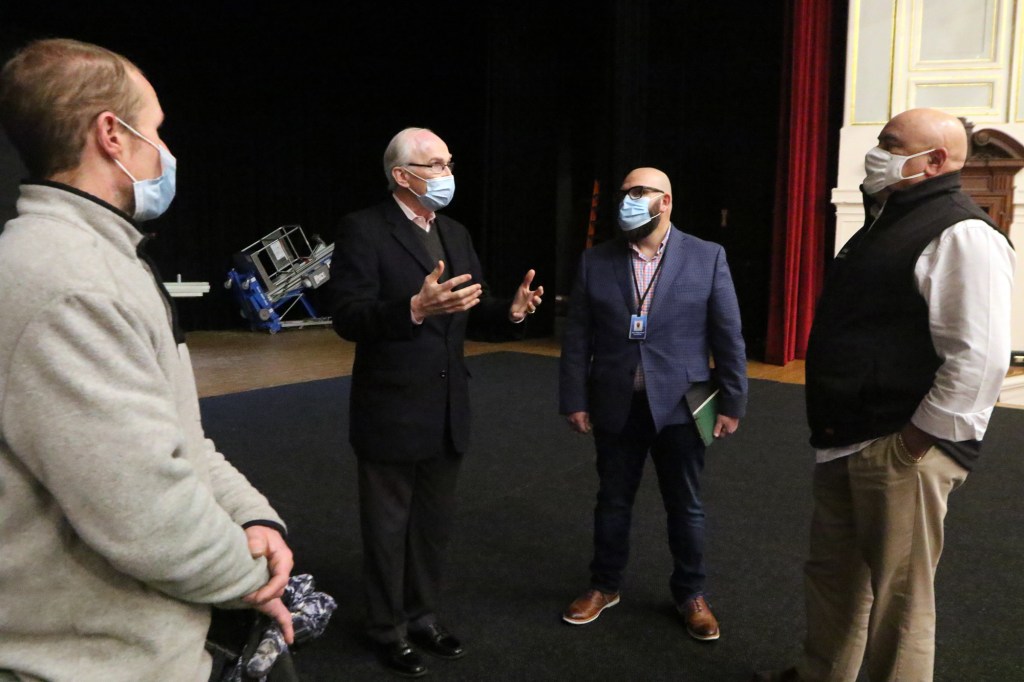 LOWELL — Beginning Thursday night, it will be tough to find peace in the ring at the Lowell Memorial Auditorium.

The ring will be a battleground for fighters throwing uppercuts, jabs and haymakers at the 75th annual Greater Lowell/Central New England Golden Gloves boxing tournament.

Outside the ring, however, officials say Golden Gloves fans purchasing tickets can achieve peace of mind from the still-raging pandemic due to state-of-the-art air purification and sanitation technology offered by a Tyngsboro company.

The tournament will run for nine weeks, culminating in the New England Tournament of Champions when the Open champs will fight on March 3 and March 10. The winners will go to nationals. The bouts begin at 7:30 p.m.

Sanalife’s robots and air purifiers will make it safe for boxing fans to attend the Golden Gloves, company employees say.

“Lowell has given a lot to me. We want to give back. We are providing a solution,” said Toly Chea, Sanalife’s chief operating officer.

Utilizing portable air purifiers, ultraviolet disinfection robots and hand sanitizing stations, Sanalife officials are confident they can make attending the Golden Gloves a safe experience, even in a building as large as the auditorium.

Similar technology is being used to keep patrons safe who enter the Wang and Shubert theaters in Boston. Studies have shown that UVD robots, which are tablet operated, can eliminate 99% of pathogens. The robots are designed to disinfect large areas and deliver fast, chemical-free, hospital-grade disinfection. The technology stems from a NASA program.

Chris Slingerland, the national sales director for Sanalife, said his company will add air and surface protection at all entryways into the auditorium. Their safety measures will continue into the auditorium hall where fans sit and where action in the ring will take place. But the protection won’t end there.

Sanalife’s sanitation and air purification will extend below into the locker room areas, ensuring the safety of fighters, trainers, referees and staff.

Kevin Coughlin, the president of Lowell Sun Charities, gave Chea, Slingerland and Rielis Mesquita, Sanalife’s president and CEO, a tour of the auditorium earlier this week.

“It’s a great journey and I credit new Mayor Sokhary Chau for bringing us all together at a Sun Santa event,” Coughlin said. “They didn’t need any convincing. I think it’s another dimension in giving. Philanthropy can take on many forms. This is an example of philanthropy at its finest. I’m 100% really excited by their generosity. One, I know people are going to be really safe. The second piece of this is we have gotten the best technology in the area and the best philanthropy from a company. That’s really what makes Lowell a great place.”

Sanalife executives and Coughlin were brought together by Chau, who became mayor last week. Coughlin explained the importance of Lowell Sun Charities, which supports the Golden Gloves, as well as how vital the 75-year tournament is to the community.

Within minutes, the decision for Sanalife to donate its services for free to the Golden Gloves was made.

“The minute they told me, I was in,” said Mesquita, a lifelong boxing fan.

“This is a great opportunity to protect the 75th anniversary of the Golden Gloves,” Chea said. “It’s really getting people back to being comfortable.”

“Let’s give back to the community,” Slingerland said.

He said it’s “amazing” to be able to help an event that’s been around for three quarters of a century and that can draw as many as 2,500 people.

Sanalife formerly had offices in Bedford, and Nashua, N.H., before relocating to Tyngsboro a couple of years ago.

Sanalife’s services are being used in dozens of school districts and trial courts as the pandemic shows no signs of abating.

Coughlin said it’s important for boxing fans attending nine Thursday nights — the tournament runs Jan. 13 to March 10 — to know they will be safe inside the auditorium.

Lowell resident Micky Ward, a former world boxing champion whose life is the subject of the film “The Fighter,” was a three-time Golden Gloves champion in the early 1980s.

The Golden Gloves have been held at the auditorium every year since 1946 prior to last year when the tournament was scrapped due to the pandemic. Officials had moved the tournament from its customary January start to April, but it was canceled when the safety of all involved could not be guaranteed.