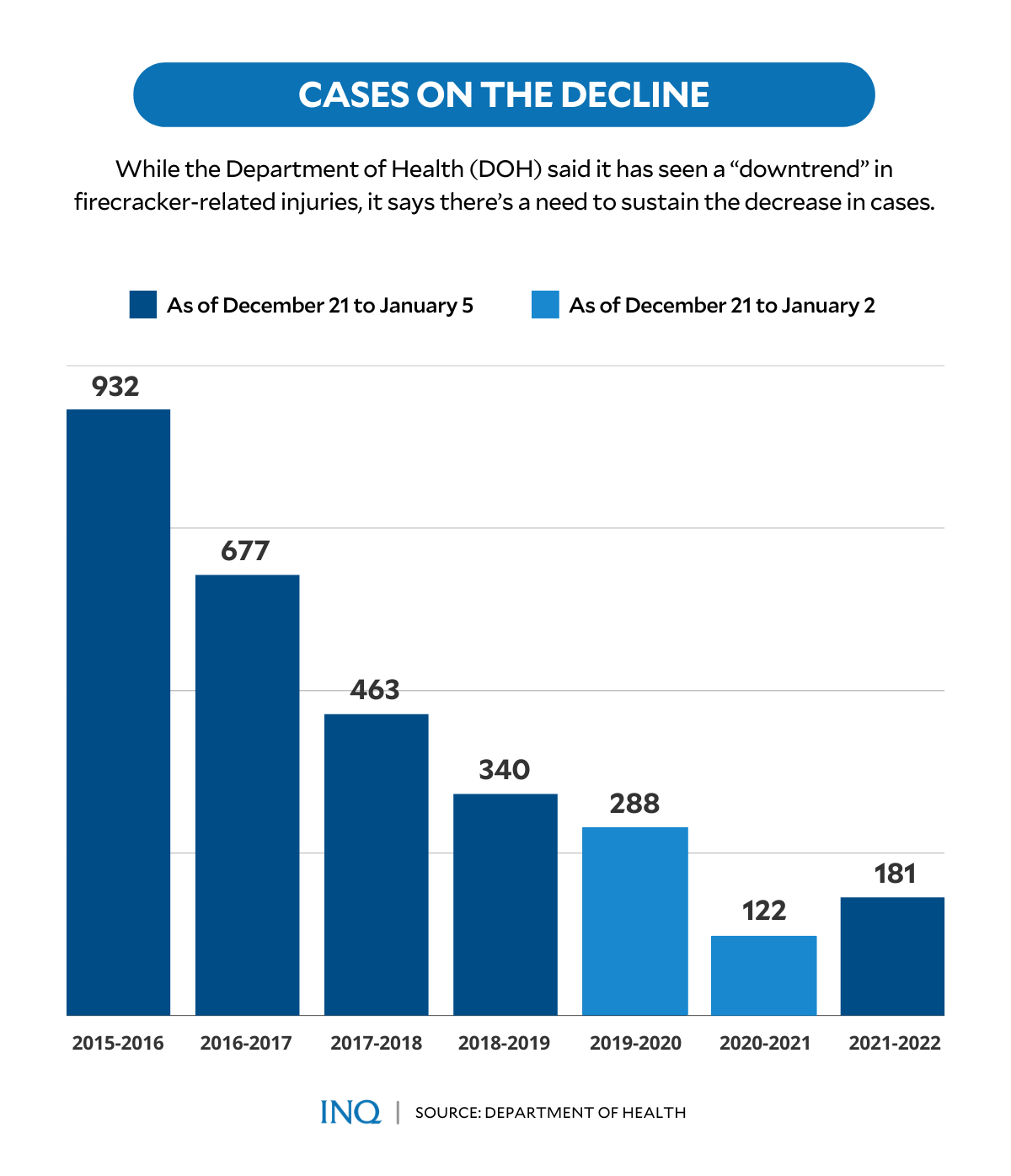 MANILA, Philippines—Now that Christmas is over, Filipinos, certainly, are already preparing for the next celebration—New Year—which is highly characterized by the revelry that comes with it.

But should Filipinos still use firecrackers?

As stated in a 24 Oras report last year, historians explained that firecrackers were invented in 200 BC by the Chinese, who set bamboo on fire as they believed that it would ward off misfortune and evil spirits.

However, because of its dangerous, sometimes deadly, consequences, the government, through the years, has been discouraging Filipinos from using firecrackers, especially on the days leading to New Year’s Eve.

As everyone knows, December of every year has been declared Firecrackers Injury Prevention Month as part of a concerted effort by government offices and private institutions to reduce firecracker-related injuries.

Then on June 20, 2017, then president Rodrigo Duterte signed Executive Order (EO) No. 28, a directive that restricted the use of firecrackers to community zones.

Looking back to 2019, then Health Secretary Francisco Duque III stressed that the EO contributed to the drop of firecracker-related injuries and that relentless rains experienced that year could also be credited for the decrease in cases.

This year, while the Department of Health (DOH) said it has seen a “downtrend” in firecracker-related injuries, it called everyone to help sustain the decline in cases.

According to data from the study Fireworks-related Injury Surveillance in the Philippines that was published by World Health Organization (WHO), there were 4,706 firecracker-related injuries involving different parts of the body in the years 2010, 2011, 2012, 2013, and 2014.

It said the most common anatomic injury areas were the hands (44 percent), legs (21 percent), and eyes (14 percent), stressing that males (80 percent) were more commonly injured than females.

When 2022 was welcomed, 181 cases consisted of 180 firecracker-related injuries while one was a stray bullet case. There were no cases of firecracker ingestion or death, the DOH said.

The victims, most of them males who were two to 74 years old, were from these regions: Metro Manila (67 percent), Ilocos Region (29 percent), and Western Visayas (26 percent). 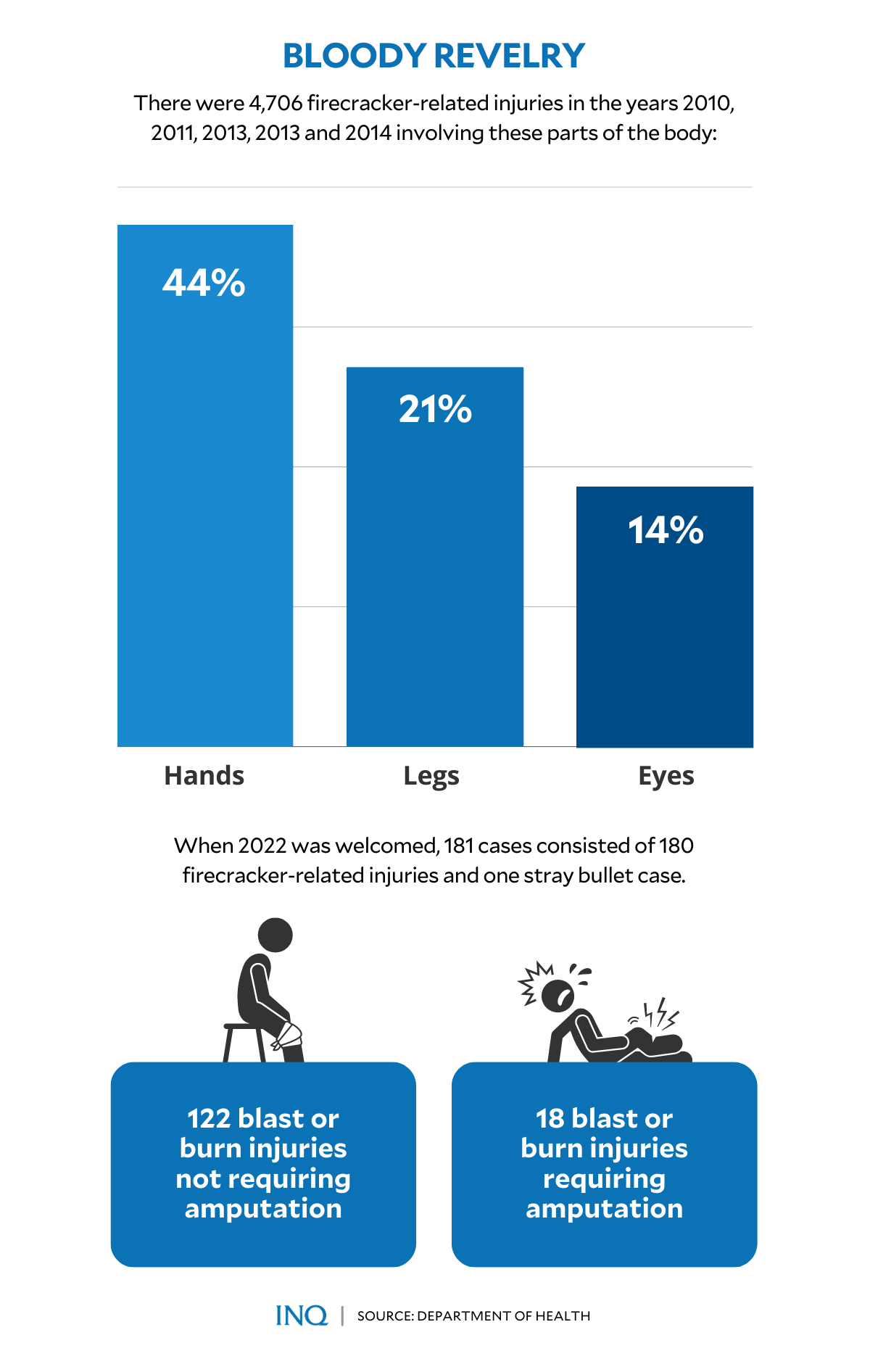 Likewise, 45 of the 180 cases were eye injuries, while the rest—5—were multiple types of injuries.

The DOH said 47 percent of the cases involved active firecracker users, with some 52 percent getting injured at home, 47 percent on the streets, and one case on a basketball court.

Looking back, it was in 2015 when a drunken man died after he embraced a “Goodbye Philippines” firecracker that was about to explode. He was rushed to the hospital but was pronounced dead on arrival.

As stated by Republic Act No. 7183, or the Act Regulating the Sale, Manufacture and Use of Firecrackers and Other Pyrotechnic Devices, the Philippine National Police (PNP) is authorized to determine what constitutes prohibited firecrackers.

Likewise, the PNP, through its director general, shall promulgate rules and regulations to regulate and control firecracker use after public hearing and consultation with the firecracker and pyrotechnic industry.

Last year, the PNP released the list of illegal firecrackers that can be seized by police, stressing that the sale of firecrackers outside firecracker zones comes with stiff penalties. 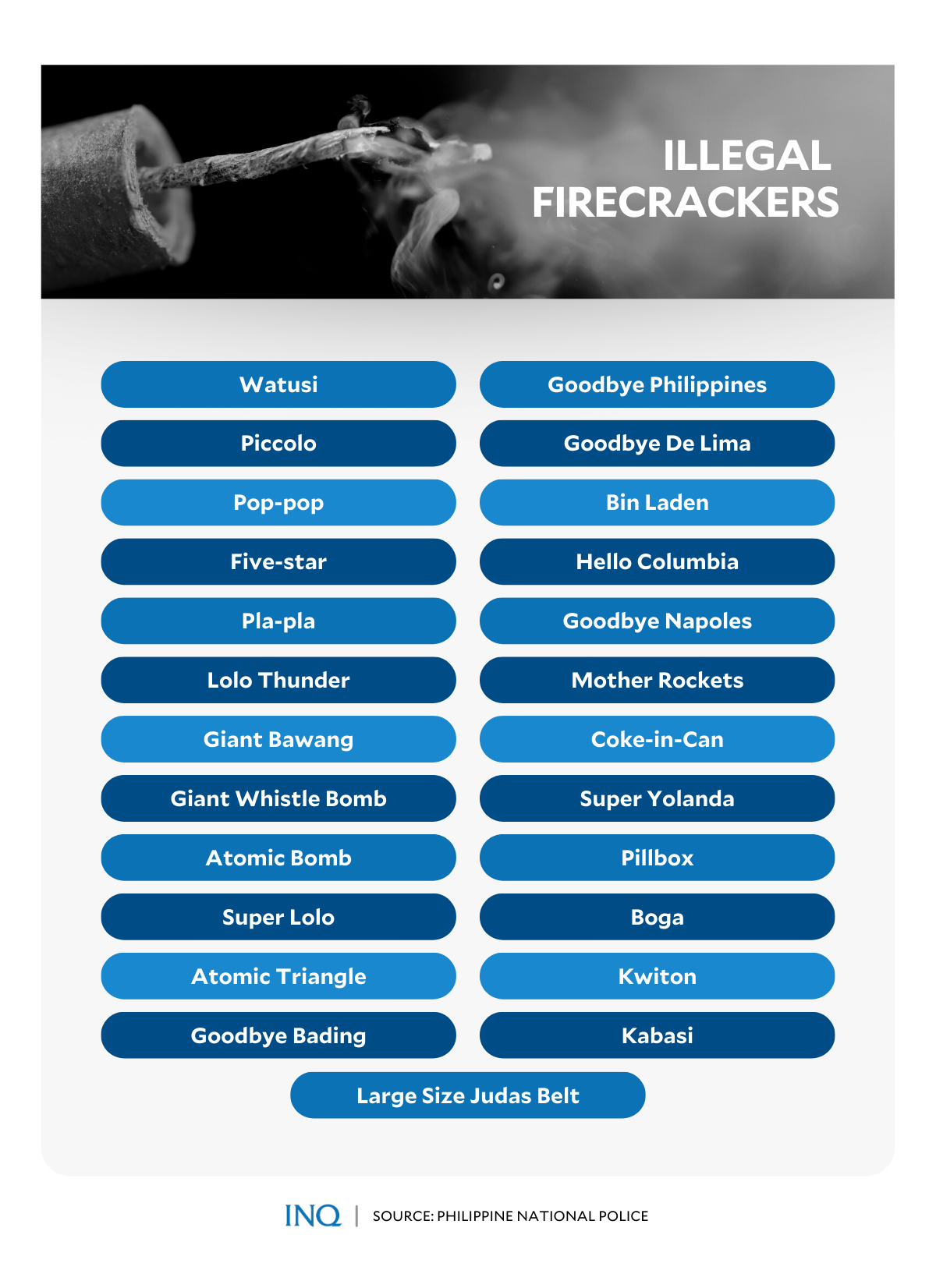 The DOH had stressed that firecrackers, legal or illegal, are dangerous.

Duque stated in 2020 that the DOH would propose a law to impose an absolute ban on the use of firecrackers in the Philippines, stressing that most of the injuries during New Year that year, were attributed to legally sold fireworks.

“It’s a bit oxymoronic to say that it is legal but it is injurious. They are conflicting. So we need to do something about this,” he said.

READ: ‘Oxymoronic’: Most injuries due to legal fireworks–DOH

“In fact, it can contribute to higher injuries because of the understanding of the common person that since it’s legal, it wouldn’t cause problems,” Duque, who said the DOH was still far from achieving its goal of zero casualty, said.

But aside from injuries caused by firecrackers, the EcoWaste Coalition warned of the harmful chemicals that firecrackers and fireworks release into the air, saying that the products threaten health and the environment.

“These products are packed with chemicals such as carbon, potassium nitrate, sulfur and other substances of concern, which can adversely affect the rights of every Filipino to a clean and non-toxic environment,” it said.

Likewise, it stressed that the use of firecrackers worsen air quality, saying that in a study by the Manila Observatory in 2019, the amount of fine particulate matter in the air exceeded the 24-hour national ambient air quality guideline value (NAAQGV) of 50.0 µg/m3.

As pointed out by Aileen Lucero, national coordinator of EcoWaste Coalition, the group would want a comprehensive ban on firecrackers and fireworks to address toxic pollution caused by these.

“[This] infringes on our right to clean air – a human right recognized and protected by the Clean Air Act,” she said.

Local chief executives are mandated to assign specific firecracker and pyrotechnic zones in their areas, where firecrackers may be sold and used.

According to latest data from the DOH, there are 20 cases of firecracker-related injuries as 15 new cases were reported on Monday (Dec. 26), less than a week before the New Year celebration.

Some 30 percent of the injuries were caused by the firecracker called Boga, which has been declared by the police as illegal. The rest were caused by Kwitis, Whistle Bomb, 5-Star, Judas Belt, “Missile”, Pop-pop.

According to data submitted to DOH’s sentinel hospitals, most, or 11, of the cases were eye injuries, while two cases were blast or burn injuries requiring amputation.

Don’t miss out on the latest news and information.