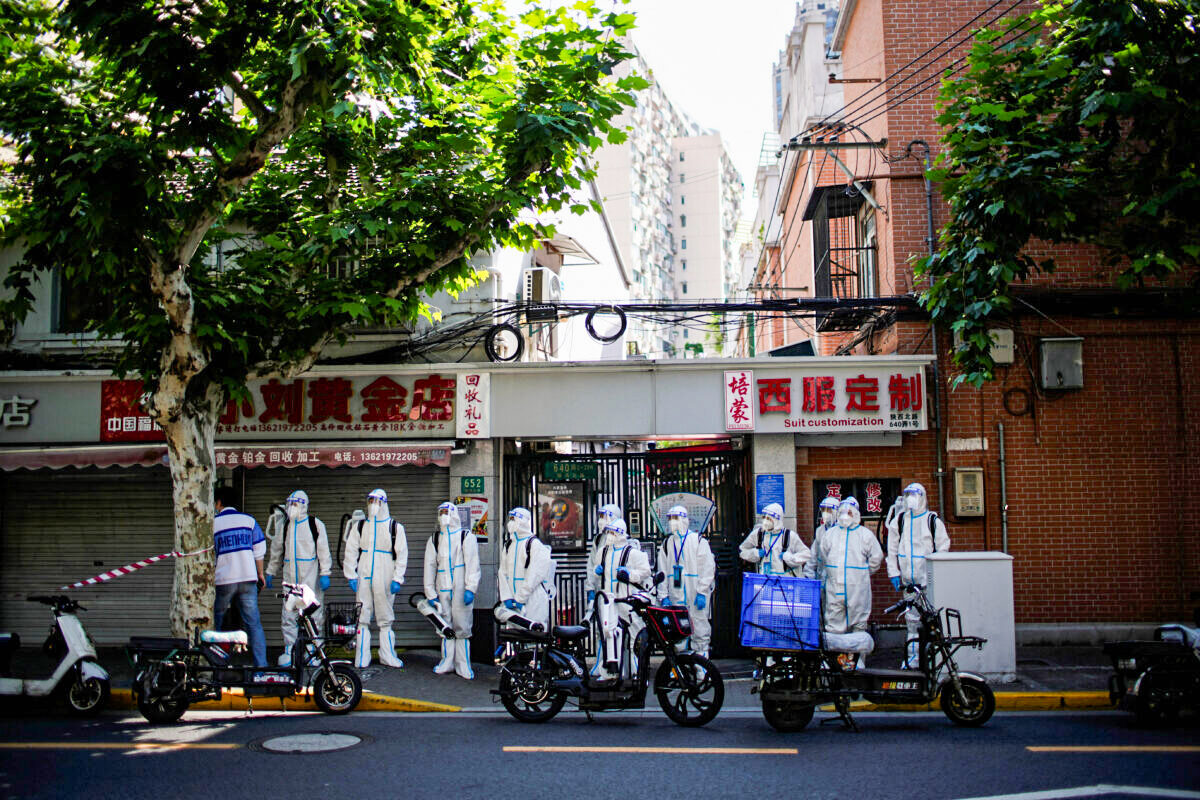 Pandemic prevention and control measures in Shanghai, China have escalated to the point that the Shanghai Municipal Government currently acknowledges there are requirements for quarantine of people with COVID-19 and disinfection of their residences, and it is possible that “a whole building will be quarantined when just one person is infected.”

Jin Chen, deputy director of the Shanghai Municipal Housing and Urban-Rural Construction Management Commission, made it clear on the morning of May 10 at a press conference on the pandemic prevention and control measures in Shanghai, that disinfection of the living places of infected people should be carried out. If adjacent or surrounding households share kitchens and bathrooms with infected people, the interiors of adjacent or surrounding households must also be disinfected

Jin Chen regards household disinfection as an important part of the entire pandemic prevention and control. He and the CDC have formulated corresponding norms and processes.

A resident of Hongkou District in Shanghai was asked to hand over the keys to their home a few days ago. The resident called a local street official, who said the community wanted to “sanitize as a whole,” including the homes of residents who had a  negative nucleic acid test, to “sanitize their homes” and threatened to not let the person, who was in isolation at the time, return home unless they handed over their keys.

At the same press conference on May 10, Shanghai officials also announced a new method of determining what close and sub-close contacts are.

Sun Xiaodong, deputy director of the Shanghai Municipal Center for Disease Control and Prevention, said that if the residence of an infected person has private kitchen and bathroom facilities, then any person living with them is closely connected, “and the residents on the same floor and the upper and lower floors are sub-close;” if the resident shares the kitchen and bathroom, then the people who use the facilities and live on the same floor or in the same village house with them, are also judged to be close, and other residents of the building or village house where they are located are considered sub-close. Specifically, a comprehensive judgment based on the results of on-site investigation and risk assessment is made.

After over a month of lockdown, Shanghai has yet to use this method of assessment. The new approach means that the range of close contacts and sub-close contacts will be expanded, and the number of people who need to be isolated will increase. Of course, for those who do not obey the rules, the Chinese Communist Party (CCP) pandemic prevention personnel will use coercive measures.

Some Shanghai residents received notice of these upgraded pandemic prevention measures a few days ago, but it was the first time that the government publicly acknowledged them. However, some people in Shanghai’s legal circles pointed out that the administrative decisions of the Shanghai local government are obviously illegal.

Shanghai lawyer Liu Dali publicly wrote to the Standing Committee of the Shanghai Municipal People’s Congress on May 8, arguing that neither the CCP’s Infectious Disease Prevention Law nor the Emergency Response Law give local governments the power to impose overall quarantine measures on uninfected residents. The article said that many residents’ basic living security rights, the right to seek medical treatment, and the right to freedom of residence will be affected as a result, which is not conducive to pandemic prevention. Liu vigorously demanded a legal review of the Shanghai municipal government’s administrative decisions to ensure that citizens’ livelihood rights were not infringed upon.

Another law professor at East China University of Political Science and Law in Shanghai, Tong Zhiwei, also published a signed article on the same day titled, “Legal Opinions on Two Measures to Prevent Pandemics in Shanghai.” The article stated that in the process of forming this paper, it received the opinions of more than 20 professors in China.

The article also states that relevant officials in Shanghai forced residents to hand over the keys to their homes and sent people to enter them and “sanitize,” which was an illegal intrusion. The two pandemic prevention measures taken by Shanghai have drawn strong reactions among the citizens and could possibly cause some kind of rule of law disaster.

Liu Dali and Tong Zhiwei’s articles were quickly banned by the whole network and can only be found if accessed outside China.

As early as April 29, the Political Bureau of the Central Committee of the CCP held a meeting to put economic development and pandemic prevention and control in equally important positions. The next day, Shanghai announced that the “Society Faces Zero-COVID.” At that time, most of the outside world thought that the lockdown in Shanghai would soon be lifted.

However, the situation changed within a few days. On May 5, the Political Bureau of the Central Committee held a meeting with the National People’s Congress. The state-run Xinhua News Agency reported that the CCP’s prevention and control policy was determined by the “nature and purpose of the party,” and it was necessary to adhere to the general policy of “zero-COVID” and to fight against all words and deeds that “distort, shed doubt, and negate” pandemic prevention policies.

The response to the zero-COVID attitude of the state media does not seem to be as strong in other provinces and cities, but Shanghai is a different story. The next day, Shanghai authorities held a mobilization meeting to “Resolutely Win the Battle of Greater Shanghai,” and issued military orders at every level. Since then, Shanghai’s pandemic prevention and control enforcement has re-escalated.

Shawn Lin is a Chinese expatriate living in New Zealand. He has contributed to The Epoch Times since 2009, with a focus on China-related topics.