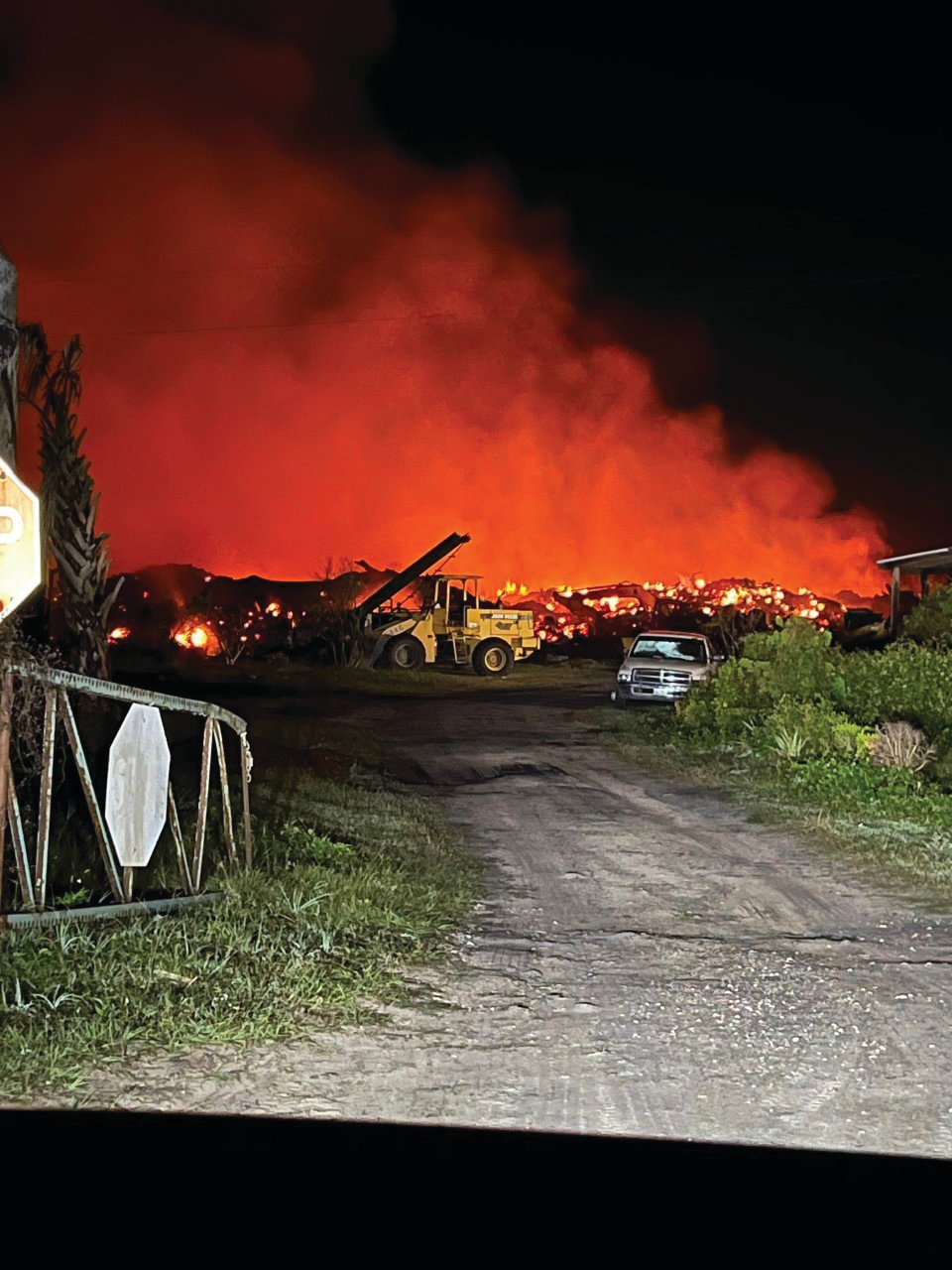 MIDDLEBURG – Jeff Reedy was forced to spend $2,000 last week for an air purification unit for his house on Power Line Road. He has to put his dog in the car and drive nearly two miles to walk his dog because the smoke is so thick along Thunder Road – and around much of Clay County – it has become something that challenges his health and patience.

The fire at the property owned by Peggy Geer started on Friday, Nov. 4. It has been burning since. And it probably won’t start spewing embers, ash and smoke for months.

“I bought 13 acres beside this facility and built my forever home,” Reedy said. “I’ve been in that home since April, and now I’m dealing with this.”

The fire is burning below ground level, much like a swampy peat or bog fire. Even with 2½ inches of rain from Tropical Storm Nicole, the smoke still bellows from the large stacks of tree debris.

The tree service was approved by the Department of Environmental Protection to operate an incinerator. However, Clay County Fire Rescue Chief Lorin Mock told the Clay Board of County Commissioners, the amount of material on the property poses a real threat to the area that will take time to burn out.

“The amount of organic material, both the timbers and the reduced material which the permitting apparently allowed to build up, has created a fairly deep-seated fire in the area that is impossible to control,” he said. “It’s similar to a peat bog when it begins to burn. So while we don’t have any immediate hope for controlling it, it would be my goal that over time with continual rainfall and reduction of the fire it will begin to reduce the amount of smoke and ash. But I’ve got to tell you, it’s pretty bad.”

DEP grandfathered the permit for the incinerator after getting approval from the county’s planning and zoning department. The property also complies with the Lake Asbury Master Plan, Mock said.

That’s not a lot of help to Reedy.

“Friday night (Nov 4), property owners were watering their homes down,” he said. “The flames were over the top of the trees. It looked like it was raining ash. The neighbors have been told there is nothing that can be done to put it out.

“The property owners of the homes surrounding it are dealing with an abundant amount of stress and trauma from this situation.  The smell of the smoke is in their homes; the ash is all over their porches, decks, homes, cars, etc.  The cars have to be washed daily just so we can see to drive. The stress of possibly losing everything they have worked for being lost is indescribable. I have videos of red showers raining down on my property. The ash content is so bad, I can’t breathe.”

Fire and Rescue and the U.S. Forest Service worked together for a week to control the flames. It now appears the fire will have to extinguish itself. The suspected embers from the incinerator probably ignited the fire. Mock said his agency had been called several times to the property to put out other blazes.

Depending on the wind, the smell of smoke has been detected as far away as Clay Hill, Orange Park, Middleburg and Fleming Island.

What concerns Mock and Reedy is the winds have primarily been from the east, which pushes the smoke westerly. If the wind changes, Mock said it could ignite other 40-foot-tall piles of trees on fire.

“It sounds like we have a real mess,” said Wayne Bolla during his final meeting as the BCC Chairman.

“The quality of air there is horrible,” Reedy said. “What I’m asking for is help. Help these guys (Fire Rescue). We have to go outside of Clay County and get help because they’re telling me two to three months for this fire. It’s not acceptable. This can’t happen again.”