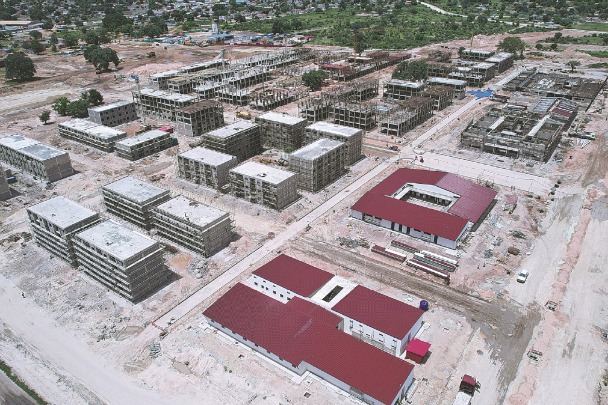 Joao Massaqui Bigi cheered as clean, clear water flowed from the tap at his home in the town of N”harea in central Angola.

“No longer do I need to get up before dawn and queue up to fetch water from the nearest well,” he said, adding that the trip took about half an hour. Having to carry a full bucket of water on his shoulder or in his hands tired him out.

“Having reliable tap water at my fingertips is so convenient,” he said. “I must thank the Chinese company for making this a reality.”

State builder China Railway No 4 Engineering Group Co Ltd, known as CREC4, helped build an urban water project in Bie province to supply households in the cities of Cunhinga, Cuemba and N’harea. It supplies over 70,000 users and keeps water flowing 24/7, officials said. This not only alleviates shortages, but also helps prevent illnesses from unclean water.

In going global, Chinese firms are often told to combine their projects with host country development strategies and help the local people. State-owned enterprises are expected to play exemplary roles.

Construction on the project began in 2016, and it went into operation in 2019, with the plant operated by its builder during a three-year test period. This year, on July 15, it was transferred to local operators.

Mao said CREC4 employed more than 10,000 locals and trained a large number of skilled workers during the process.

Maray Enrique Puentes, who was among the first group of workers they hired, first learned to erect steel frames.

“Aided by my Chinese colleagues, I learned not only such basic skills as tying steel bars and building scaffolding, but also basic Chinese,” Puentes said. He added that his monthly income almost doubled, to 50,000 Angolan kwanzas ($117) a month, and he gained the admiration of family members, relatives and friends.

Mao said since construction started on the project, CREC4 staffers have put in their best efforts to complete the task and bring new hope to local residents.

They were required to overcome many difficulties, including many construction challenges, getting to know the local geography and obtaining building materials, he said.

“For one thing, it was remote,” said project leader Guo Qingsan. “The project is more than 900 km away from the national capital, Luanda, while Cuemba and N’harea are 310 km apart.

“Transporting building materials was difficult. For example, the road between Cunhinga and Cuemba was muddy and full of deep potholes and puddles. It was difficult when vehicles broke down, and terrifying to see warnings about minefields on the side of the road,” he said.

Mines laid during Angola’s 27-year civil war, which ended in 2002, remain a problem in some areas.

“But we stuck to our job and won the respect of locals,” Guo said.

Since starting work in Africa in 2012, CREC4 Municipal Engineering has built water projects that have benefited some 3.5 million users, the company said.

In Angola, the company also built a sewage treatment plant for the New Center of Cacuaco Social Housing Project, the water supply system for the Ekuma new city housing project in Ondjiva and an expansion project for the Luanda water purification plant.

In Mauritania, CREC4 also built a rainwater drainage system in the port city of Nouakchott, the nation’s capital, as part of an urban drainage project that China donated to the country.