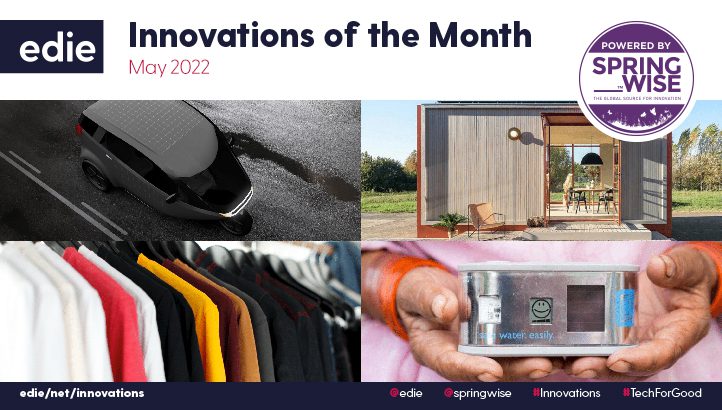 Every hour, the Earth is bathed in 430 quintillion Joules of energy from the sun. That is more than the amount of energy the whole of humanity consumes in a full year. These staggering figures show the true potential of solar energy for innovation. And the uses of sunshine go beyond solar farms and solar panels on domestic roofs.

Four of this month’s innovations use the sun as an energy source for applications as varied as urban mobility and water disinfection. A new tiny house achieves carbon neutrality through in-built solar panels, while an electric tuk-tuk can travel 10,000 kilometres per year on solar energy alone. Meanwhile, a cleantech startup has a bold vision to put super-efficient, digitally printed solar cells on every consumer device, and a social enterprise has developed a device that lets remote communities harness the UV rays in sunlight to disinfect drinking water.

Elsewhere, a materials science company has produced thermally efficient clothing that can help to reduce home heating and cooling emissions and costs, while a route-planning app and website makes it easy for travellers to find the greenest and most cost-effective way to reach their destination.

The average American home emits around 6,400 pounds (2,903 kilogrammes) of carbon dioxide per year according to NPR. By contrast, tiny homes typically produce around 2,000 pounds (907 kilogrammes) of annual CO2 emissions. Now, US startup Cosmic has produced a tiny home design that it claims is carbon neutral.

The company’s ultra-efficient homes start at just 350 square feet, but they come packed with high-tech features that allow them to function as both a primary residence and a getaway bolt-hole. The secret to the design’s success is its standardised frame, which includes built-in solar panels and batteries. Each tiny house also includes a built-in roof and floor, and mechanical, electrical, and plumbing systems.

The modular design means that the houses can be assembled quickly and easily, without the need for construction crews. And because they are optimised to be energy-efficient, they can be powered entirely by renewable energy sources. Lithium-ion batteries store energy from the solar panels, with the option to return any extra energy produced back to the grid.

Increasingly, those interested in city planning and energy saving have been pointing out that it just doesn’t make sense to transport people or smaller amounts of goods around urban areas in traditional vehicles – even electric vehicles. Cars are large, heavy, and energy-intensive, and startup Infinite Mobility has developed an alternative – solar-powered tuk-tuks designed for last-mile deliveries, or to efficiently carry just one or two people.

The design for the streamlined solar tricycles incorporates solar cells into the vehicle’s body. And the diminutive size of the vehicles means they are cheaper to produce and buy than a four-wheeled vehicle. Moreover, the tricycles can travel up to 10,000 kilometres per year on solar energy alone – enough for the average urban user.

Infinite Mobility also points out that the tuk-tuks don’t need recharging from the grid, eliminating one annoyance of EV ownership. And there is another benefit – depending on where they’re based, many micro-mobility vehicle sales are now supported by subsidies from local, regional, or national governments.

SUPER-EFFICIENT SOLAR CELLS ARE DIGITALLY PRINTED TO FIT ANY DEVICE

Perovskite is a calcium titanium oxide mineral that, when applied in a thin film as a semiconductor, converts solar energy to power very efficiently. Using green nanoparticle inks, the Perovskia solar cells are digitally printed in a variety of sizes and shapes to fit smart devices such as wearables, sensors, and IoT devices.

As well as being more cost-effective than current photovoltaics, the company’s production process is much healthier for the environment – producing far fewer emissions. Perovskia also provides bespoke designs to help businesses create solar cells that fit their projects technically and visually.

Around the world, 1.8 billion people lack access to safe drinking water. To avoid water-borne disease, these people must treat the water available to them before they can drink it. But existing treatment solutions are associated with additional costs – both monetary and environmental. Boiling water, in particular, causes carbon emissions and air pollution.

But there is one way to treat water that involves no emissions and uses a free resource found everywhere: sunlight. Solar water disinfection (SODIS) is a process where the sun’s natural UV rays eliminate pathogens—such as bacteria, viruses, and protazoa—from contaminated water exposed to sunshine. The difficulty is knowing when contaminated water has been exposed for a sufficient length of time for the UV rays to have rendered it safe.

This is where Austrian social enterprise HELIOZ comes in. The organisation has developed the WADI – a device that visualises the process of SODIS in water containers such as plastic and glass bottles. The WADI device, which can measure UV light, is placed alongside bottles of contaminated water exposed to sunshine, so that it receives the same dosage of UV rays. It can then be used to measure when the bottles have received sufficient exposure to render them safe – defined as the removal of 99.99% of pathogens.

In the US, 38% of greenhouse gas emissions from residential housing are produced as a result of heating and cooling rooms. In response, materials science company LifeLabs has developed a new generation of thermally efficient textiles.

Wearers of the company’s CoolLife t-shirt experience a continual reduction in body temperature of three degrees Fahrenheit, while the WarmLife jacket is billed as one of the warmest in the world. The CoolLife and WarmLife ranges can help to reduce reliance on cooling and heating systems – both of which contribute significant amounts of emissions. For example, continuous cooling of three degrees of body heat can make a huge difference throughout the day and night, making it easier to target the use of HVAC systems for limited amounts of time.

While most people know that flying uses much more carbon than other forms of mass transit, they are likely to be less aware of the emissions to cost ratio of other modes of transport. To make things more confusing, at least in Europe, it is often difficult to book train tickets in advance when travelling through more than two countries, or to compare emissions on different services and routes.

To cut through this confusion, startup Green Tickets has developed an app and website that allows users to rank transport options by travel time, price, and CO2 emissions. The company’s goal is both to make it as easy to book a bus or train ticket as it is to book an airline ticket, and to provide transparency about emissions in a way that helps people make more informed decisions.

To compile its data, Green Tickets uses a variety of sources, including Google Maps for driving routes, open-source projects for European trains, and the back office of Skyscanner for flight information. The data allows users to quickly find the optimal itinerary for each trip, based on time of the year, availability, budget, carbon emissions, and personal preferences.

Springwise is the leading global innovation intelligence platform for positive and sustainable change. For the last 20 years, it has been uncovering and curating the most innovative thinking and ideas on the planet. Today, with a library of more than 11,000 global innovations, Springwise is trusted by thought-leaders, entrepreneurs, investors, educators, and tech disruptors as the leading source of inspirational ideas that matter. Springwise.com

© Faversham House Ltd 2022 edie news articles may be copied or forwarded for individual use only. No other reproduction or distribution is permitted without prior written consent.