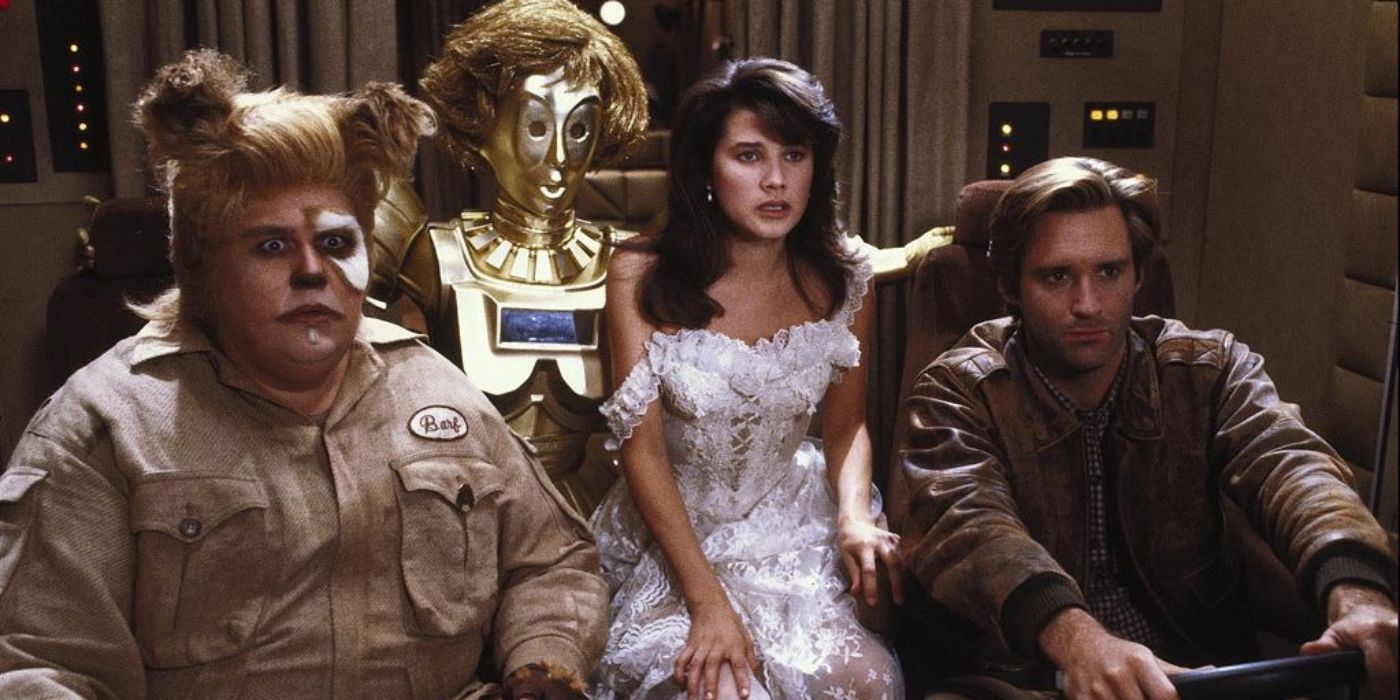 Arguably the last great Mel Brooks film to date, Spaceballs is in the upper echelon of parody films. It may also be the last great parody film in general, high above Disaster Movie or even Brooks’ own Dracula: Dead and Loving It. Spaceballs sets its sights primarily on the Star Wars films, but takes shots at other great science-fiction films as well, including Alien and Planet of the Apes. It has all the tropes of the parody genre, with the usual Brooks flair atop. Those who know Spaceballs know why it is the epitome of parody films. Those who don’t, well, let’s look at why you should.

Spaceballs begins on the planet Druidia, where King Roland (Dick Van Patten) is intent on marrying his daughter, Princess Vespa (Daphne Zuniga), to the perpetually yawning, drowsy Prince Valium (Jim J. Bullock). Meanwhile, the leader of the neighboring planet Spaceball, President Skroob (Mel Brooks), hatches a plan to steal the fresh air of Druidia, having used up almost all of their own. The plan involves sending Dark Helmet (Rick Moranis) to kidnap the princess. She, however, has fled the planet with her trusty droid Dot Matrix (Joan Rivers). King Roland hires mercenary Lone Starr (Bill Pullman) and his sidekick Barf (John Candy), a mog (half-man, half-dog) to find them, which they do, but when their Winnebago spaceship runs out of fuel, they crash on the desert moon Vega. After passing out from walking in the desert, the group are rescued by the small, robed alien Dinks and are taken to a cave where they meet the wise Yogurt (Mel Brooks), who teaches Lone Starr about the mystical power of “the Schwartz.” Unfortunately, Dark Helmet finds them and captures Vespa, who reveals the code to open Druidia’s shield after being threatened with a reversal of her nose job. With this information in hand, Skroob gives the command to transform their ship Spaceball One into Mega Maid, which begins to vacuum all the fresh air from Druidia. But Lone Starr saves the day, rescuing Vespa and Dot, defeating Dark Helmet in a Schwartz showdown, and reversing the Mega Maid vacuum to blow the air back onto the planet. Cue the happy ending, where it is revealed that Lone Starr is actually a prince, and as such is free to marry Princess Vespa, with the two having grown closer over the course of Spaceballs.

There is no denying that Brooks is having a field day with the cheap laughs in Spaceballs. Some may even say that Brooks should be above that, clearly forgetting how the most memorable scene from his classic Blazing Saddles is a group of cowboys sitting around a campfire, eating beans, and farting. Spaceballs starts off innocently enough, with a shot of Spaceball One’s underside, mirroring the appearance of the Imperial Star Destroyer at the beginning of Star Wars Episode IV: A New Hope, except the ship goes on, and on, and on. From there, it is a veritable cornucopia of corniness. The introduction of space gangster Pizza the Hutt (Dom DeLuise). The absurdly large helmet of the Darth Vader-like Dark Helmet. The entirety of the bridge crew with the surname “Asshole,” prompting Dark Helmet’s immortal line “I’m surrounded by assholes!” Troopers combing the desert for clues… with a large, plastic comb, faring only slightly better than the two black troopers using the large afro pick (“We ain’t found s**t!). Ludicrous speed. Vespa’s Princess Leia-like hair buns as headphones. Brooks knows that the unsubtle joke is still a joke, putting the need for the laugh above the need for anything highbrow.

RELATED: Why ‘Spaceballs’ Is a Better ‘Star Wars’ Sequel Than ‘The Rise of Skywalker’

‘Spaceballs’: The Genius of Brooks

Yet among the gags and quips in Spaceballs, Brooks weaves in moments of comic genius that only one with the deft touch of a comedy master is capable of. There’s the unexpected cameo of actor John Hurt, dining at a space cafeteria with friends when an alien bursts from his chest, prompting Hurt to cry “oh no, not again,” a very funny call back to the actor’s demise in Alien (but at least this alien puts on a top hat and dances). It’s a meta joke made funnier by its randomness, but there are two specific moments in Spaceballs that make an even better argument for Brooks’ talent. The first is in the cave with Yogurt, where he shows off the wide array of Spaceballs merchandise, a hilarious exaggeration of the scope of Star Wars merchandise. There’s Spaceballs: The T-Shirt; Spaceballs: The Yogurt Doll; Spaceballs: The Breakfast Cereal; and even Spaceballs: The Flamethrower. Better yet, the merchandise continues to show up randomly throughout the rest of the movie, which ties into the second moment: Spaceballs: The Movie on VHS (hey, kids — VHS was almost like streaming a film, except tactile with an infuriating need to rewind). Having overshot Lone Starr’s “Eagle-5” Winnebago ship, Dark Helmet and Colonel Sandurz (George Wyner) look at the VHS copy of the film — the film they’re in the middle of — to track down Starr and Vespa, which leads to a very Abbott and Costello bit between the two about what they’re looking at (“You’re looking at now, sir.”).

While Spaceballs was met with mixed reviews upon release, the years since have seen a deeper appreciation of the film, above and beyond its cult classic status. The appearance of movie posters for a Spaceballs sequel, Spaceballs 2: The Search for More Money, became an international news story back in 2016, with the positive, hopeful reaction that it was true (it wasn’t), proof of its popularity. Steven Spielberg‘s Ready Player One has the Eagle-5 in the background of Aech’s (Lena Waithe) garage, acknowledging Spaceballs’ presence in pop culture. Interestingly, Spaceballs would also foretell, unintentionally (or possibly intentionally), the environmental concerns about clean air, and the release of films to media within days of a theatrical release (exaggerated, yes, but still eerily prescient). Spaceballs, ultimately, is a feather in the cap for Brooks, and does for the science-fiction genre just what his Young Frankenstein did for the horror genre, Blazing Saddles did for the western, what High Anxiety did for Hitchcock thrillers, what Silent Movie did for… well, you get the point.