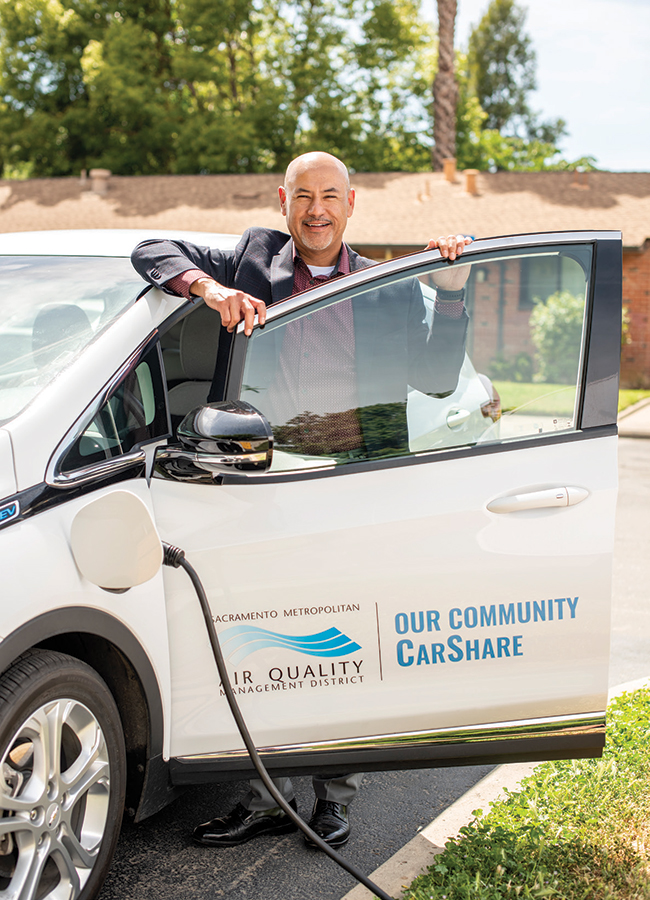 “We’re dreaming big. We want zero emissions in every application: locomotives, ships, you name it. Those technologies are out there, but it’ll take time and a lot of money—and public and political will,” says Alberto Ayala, the executive director of the Sacramento Metropolitan Air Quality Management District. He is sitting in the back patio area of a midtown cafe, drinking a large mug of tea, his eyes shaded from the intense sun.

Before Ayala moved over to work with the city, for many years he was a staffer at the California Air Resources Board, where he ended up in charge of its electric vehicle programs. The state first began putting EV requirements in place back in 1990 as it sought to position itself at the forefront of what was then a just-emerging global effort to tackle climate change. With a state and a city perspective, Ayala knows how far Sacramento and the state have come on their journey to eliminating the internal combustion engine—which is responsible for about half of all greenhouse gas emissions in California—and toward a zero-emission future populated by electric vehicles and hydrogen fuel cell modes of transport. He also knows just how far they still have to go. Despite Sacramento’s huge push to embrace electric cars, because people hold onto their vehicles for a long time in sunny, generally mild climes such as Sacramento’s, it takes an eon to reshape a large vehicle fleet: Even today, less than 2% of all the cars in the city are EVs.

Yet with Joe Biden’s presidency ushering in a new era of massive federal investments in green technology and with California once again being given legal authority to set its own strict tailgate emissions standards, there’s a buzz in the air these days, a sense that the vehicle fleet is about to change very, very fast. When it does, cities like Sacramento, which have already seeded the ground for change, will likely lead the way.

If you own an electric vehicle and plan your route carefully, it’s now pretty easy to drive across country, hopping from one ultra-fast charging station to the next. Many of those stations now can—in the amount of time it takes a driver to buy a coffee and sit and drink it for a few minutes—charge a car to a range of several hundred miles. But if you fail to plan in advance, you still risk running out of charge—a phenomenon that fills EV drivers with something approaching existential dread. In California, by contrast, where 40% of all the electric vehicles in the country can be found, and where one in eight of all new vehicles bought is zero emission, there’s now enough density of charging stations that people don’t have to spend much time planning their routes in advance. It’s hard to run out of electric juice in a state with tens of thousands of public chargers.

“Broadly, our state agencies are aligned in trying to accelerate zero-emission transportation,” says Patty Monahan, commissioner of the California Energy Commission. “Eventually it will extend to planes and ships as well as cars and trucks.”

For California vehicle consumers hoping to go green in their car purchases, the problem these days isn’t a lack of infrastructure; it’s a shortage of available vehicles. For example, so many people want to buy the new Ford F-150 Lightning pickup truck—which can store electricity and help power your home when the power grid is under stress—that Ford created a waitlist, then had to inform many people on the waitlist (who had put down deposits) that there just weren’t enough vehicles, and they’d have to postpone their purchase for a year or two.

“I pulled out,” says Rocky Rushing, a former Capitol staffer and legislative advocate for Coalition for Clean Air. “I figured I’d see what comes off the assembly line in ’22-’23. A pickup truck fits my particular needs, to get out in the wilderness, to camp. You bring a lot of equipment, and you need something spacious.” But, he says, he’s confident he’ll find an alternative EV soon. “The choices and options for consumers looking for EVs are becoming wider with every passing year,” he explains.

All of a sudden, you’ve got critical mass, and it’s beginning to make a difference,” Ayala says, pointing to Gov. Gavin Newsom’s mandate that the sale of new internal combustion engine, gas-fueled cars be phased out in California by 2035, and that heavier vehicles—trucks, buses and the like—also move toward fuel cell technology in the decade following that. “But we’re still woefully behind. We have a fundamental idea of what is needed. We’re not close to there. That’s why it’s all hands on deck. It’s going to take time. We’ve got to get off of oil.”

Best-guess estimates produced by the California Energy Commission suggest that California currently has 80,000 public chargers. For a fully zero-emission vehicle fleet, which might become a reality around midcentury as old vehicles age out, it will ultimately need 1.2 million chargers for cars and another 160,000 for medium- and heavy-duty trucks. It will also need thousands of hydrogen fueling stations.

Aware of the urgency of the moment, Newsom has pumped billions of dollars into building up a zero-emission infrastructure, including thousands of EV charging stations and dozens of hydrogen fueling stations, and his recent budget proposal commits an additional $10 billion to build up that infra-structure in the state even further over the next six years.

Meanwhile, at the city level, through leveraging state grants and working with innovative private companies, Mayor Darrell Steinberg has encouraged the development of local EV infrastructure in recent years. The city’s endeavors include equity grants intended to make the purchase and charging of EVs more affordable to low-income residents; the extension of a program of free and discounted charging of electric vehicles in city parking lots; and the siting of chargers in the streets and parking lots around multifamily units, where residents don’t have their own garages and thus can’t install their own chargers.

One of the happy consequences of this effort is that Sacramento now is at the forefront of the zero-emission vehicle revolution in the United States. It has a large and growing fleet of electric vehicle rideshares (more than 250 cars at last count, with insurance paid for by the company rather than the drivers), zero-emission buses and electric shuttle services. A growing number of workplaces offer free EV charging as a job perk. Also, in many low income communities, subsidy programs help residents trade in their old, gas-guzzling, greenhouse-gas-spewing clunkers for more expensive—but far less polluting—electric vehicles.

In 2016, the environmental justice organization Valley Clean Air Now began a program called Clean Cars For All, which offers low-income families up to $9,500 to replace older cars with either all-electric or plug-in hybrid used vehicles. Since then, the group has facilitated more than 4,000 car replacements in the San Joaquin Valley, just south of Sacramento, alone. In 2022, the group has $15 million available to subsidize these trade-ins in the area. “It’s a really cost-effective way to improve air quality, carbon emissions and quality of life in low-income communities,” says Tom Knox, executive director of Valley Clean Air Now.

Bit by bit, the city and its surrounding metropolitan region is reinventing itself around a radically new vision of transportation and energy usage. “It starts to generate an ecosystem for ZEVs,” says Analisa Bevan, a zero-emission infrastructure specialist with California Air Resources Board. 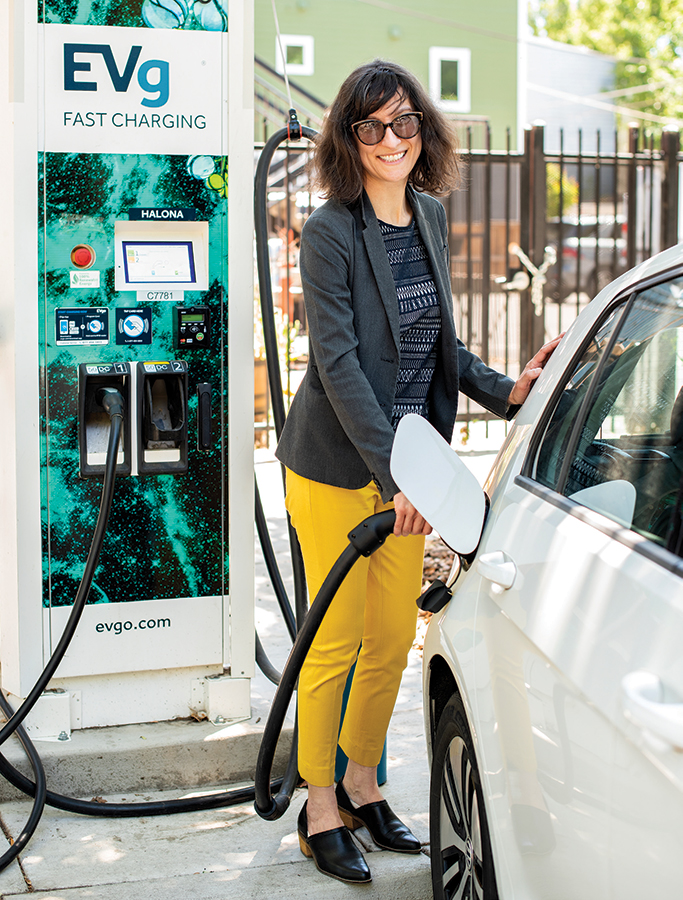 Jennifer Venema at the city’s newest curbside chargers (14th and E streets), which are wrapped in artwork by local artist Melissa Uroff. Photo by Gabriel Teague.

In 2017, the company Electrify America, which operates a network of fast-charging stations across the country, designated Sacramento its first Green City and promised to invest $40 million in building up local EV infrastructure.

Over the next few years, the company installed 65 ultra-fast chargers in 14 locations around the city. Some are in Target parking lots, others at the airport. Some are located in new lots dedicated exclusively to electric vehicle charging.

“Our stations take credit cards, Google Pay, debit cards, and you can pay via your app,” says Matt Nelson, director of government affairs for Electrify America. Far from the process being somehow more cumbersome than filling up a tank of gas, the financial choices around EV usage make charging one’s car about as easy as driving through a toll booth using an E-ZPass.

For Jennifer Venema, who heads the city of Sacramento’s Office of Climate Action and Sustainability, all of this adds up to an enormous opportunity to speed up the region’s transition to clean transportation. “We have a lot of infrastructure in Sacramento,” she says, “spurred by SMUD’s initial investments; by the American Recovery and Reinvestment Act investments in 2009; and there’s now an infrastructure in parking garages and so on. We now have the densest public fast-charging networks in the nation, and are second or third in terms of public fast chargers per capita.”

Venema says Sacramento is using grants from the state to buy electric vehicles, to invest in electric school buses and to contract with private companies to provide charging stations in public housing and mutual housing complexes around the city. For example, in the mutual housing development in Lemon Hill, 5 miles south of downtown, an EV car share program is now up and running that allows members to get up to nine hours a week of car usage.

All of these initiatives tally up to a massive change in Sacramento’s car culture. By 2025, the city has a goal of seeing 75,000 zero-emission vehicles on its roads. Venema and others envision a time in the not-too-distant future when you will be able to pull up to your local library and charge your car while you browse the stacks, or even borrow an electric car or bike from the library in much the same way you currently check out books. Some of the technologists involved in planning the city’s future see a time when you’ll be able to park your car on a charging spot and charge it wirelessly, much as you can now charge your cellphone on a pad in your car.

“With electric vehicles,” says Venema, “we really see it as a means to getting to so many of our ends: bringing in technology-sector jobs, meeting the needs of underserved communities, meeting our energy challenges.”