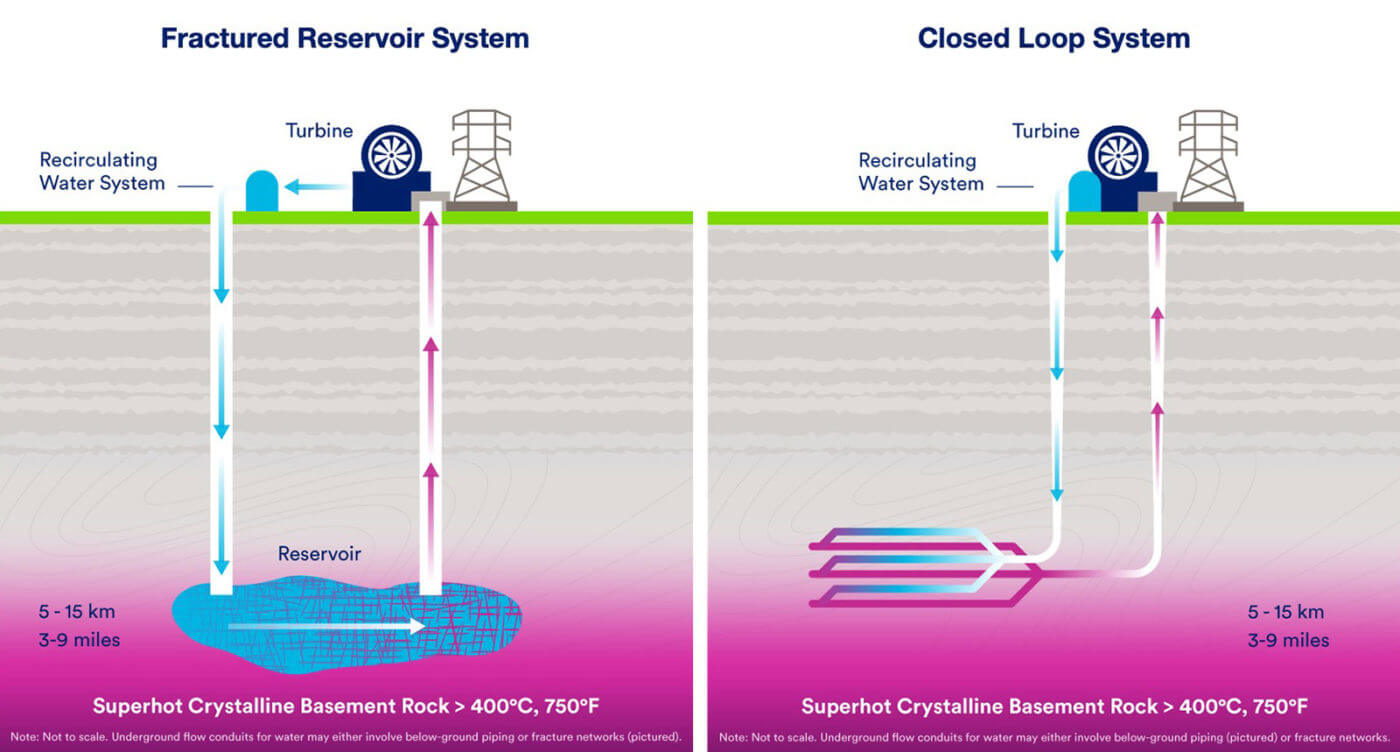 While the decarbonization debate rages on, the seeds of a quiet geothermal energy revolution are being sown. As described in our October 2021 report, superhot rock energy holds the potential to tap into earth’s inexhaustible heat resources to generate widely available, affordable, energy dense, zero-carbon, firm power and hydrogen at scale — energy resources sorely needed to address climate change and energy security.

Today, conventional geothermal power production capacity sits at a mere 15 gigawatts (2018) globally, the equivalent of just 15 large power plants! One of the major reasons for this limited capacity is that we can currently only deploy conventional geothermal in global regions that allow tapping into natural steam from shallow magmatic heat which turns out to be a very small sliver of the planet. Because of this, geothermal has been overlooked, effectively invisible as a decarbonization solution and written off as a niche energy resource only available where the Earth’s crust is thin and heat is near-surface — typically where there has been volcanic-related activity in the past thousands of years.

To expand geothermal energy production and redefine it as a viable high-energy resource across the planet, heat must typically be harnessed from greater depths, where rock is extremely hot. To do this, geothermal systems need to be engineered in otherwise dry rock — without natural steam — to emulate conventional natural steam-driven hydrothermal systems. This is done by injecting water into natural rock fractures — or possibly closed loop systems (water remains in a loop of subsurface tubing) — where the injected water is heated and returned to the surface for energy production (see graphic below). These “Engineered Geothermal Systems” (EGS) were first investigated at the Los Alamos National Laboratory in the 1970s. Today’s EGS research and development efforts target moderate geologic temperatures in the range of 150-300 degrees Celsius. EGS systems have yet to be fully demonstrated and commercialized, largely because needed investments in engineering have yet to be made that can transform them into scalable, affordable energy sources. Superhot rock energy has the potential to be an even hotter and deeper extension of EGS, targeting temperatures in the range of 400-450 degrees Celsius but carrying up to ten times the amount of energy to the surface as a lower temperature conventional well or of an expected EGS well. This order-of-magnitude higher energy delivered per well, means fewer wells required for a commercial power facility, and more revenue to offset deeper drilling and well construction costs, to make superhot rock plants economically competitive.

How it works. SHR will utilize injection and production wells in fractured (left) or closed-loop (right) systems to bring  5-10X the heat of a conventional geothermal well to the surface. (Note: The use of a closed loop system may have a lower relative power production potential than a fractured system — both options should be supported until the optimal method is determined.)

The opportunities and value proposition for superhot rock energy are impressive for the following reasons:

Currently, about 30 superhot rock energy wells reaching superhot conditions above 400 degrees Celsius have been drilled around the world, all in volcanic geothermal areas — but power has yet to be produced from superhot hydrothermal (natural geologic water) resources.

So, what are the barriers that prevent us from tapping this energy resource today?

Producing power at the extremely high temperatures and expected depths for superhot rock systems currently poses engineering challenges that will require the kinds of rapid innovation that sped production of oil and gas from shale in just a decade in the 2000s. Such innovations for extreme subsurface conditions will include drilling, well construction (metals and cements), downhole geophysical probes designed for identifying permeable or fractured zones specifically in hard rock, heat reservoir development methods avoiding earthquake risk, and surface power production facilities with special turbines to generate electricity from the superhot/supercritical steam. Indeed, progress has been made over the past decade that will help meet some of these challenges:

One such possible project, Alta Rock Energy’s Newberry project in Oregon, is ready to deepen an existing well from 3,000 meters depth and 330 degrees Celsius to 4,500 meters depth with superhot rock energy conditions greater than 400 degrees Celsius to demonstrate power production. Supplemental funding is an urgent need for this project to move forward and CATF is actively advocating for demonstration project support from the federal government in the U.S.

In Europe, two Iceland Deep Drilling Project (IDDP) wells were drilled into superhot rock with temperatures above 400 degrees Celsius. Testing of its “Krafla” well suggested a whopping 35 megawatts (MW) of energy output would be available per well — as compared with a typical lower temperature commercial geothermal well producing 3-7 MW.

While there have been several of these superhot rock drilling efforts around the world completed in the past decade, there is inadequate coordination and no clear roadmap to demonstrate, scale, and commercialize the technology. Moreover, funding for superhot rock projects has been scant and dependent on political winds, thereby relegating the development of this high-energy solution to slow, piecemeal progress.

Clean Air Task Force has assembled a Superhot Rock Energy team of experts to help drive momentum and build constituency to promote a robust commercialization ecosystem for this innovative new energy technology. We are facilitating a global superhot rock energy roadmap and strategy development: building a constituency, undertaking basic economic modeling, promoting regulatory development for superhot rock projects, and analyzing how superhot rock energy can contribute to decarbonization in the future. We’re working to raise awareness by educating stakeholders, developing networks, facilitating markets, and advocating for government investment in superhot rock demonstrations. Our goal is to accelerate understanding, support, and funding for a half dozen global superhot rock energy demonstration projects over the next decade in order to speed widespread superhot rock power plant construction by 2040. This will mean committing hundreds of millions to billions of dollars over the next decade, funding levels at the same scale as current governmental investments in nuclear energy technologies, hydrogen, and carbon capture.

Deep decarbonization will require a revolution in clean electricity to replace today’s unabated fossil generation. In order to participate in a global decarbonized economy, fossil energy industries must solidify their commitment to emissions reduction and use their resources, existing infrastructure, sub-surface know-how, and funding capital to support the development and commercialization of this new earth energy source.

The need to decarbonize our energy system to address climate change is growing more and more urgent. Global energy demand will only increase, and we owe it to future generations to prioritize the development of this firm, always-on, renewable energy source. Superhot rock geothermal is a promising solution that could resolve many of the hardest challenges to addressing climate change. So, what are we waiting for?