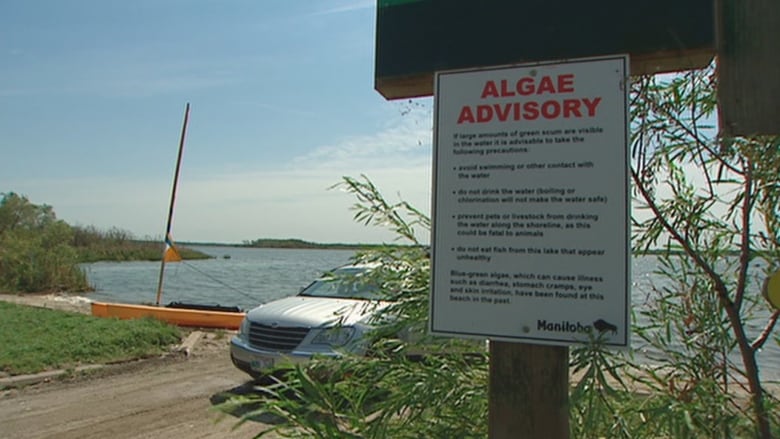 The province is warning Manitobans to avoid the water at Ninette Beach, on northern Pelican Lake, after high levels of toxic algae were discovered last week.

The concentrations of microcystin — an algal toxin that can be harmful to the liver or nervous system if large amounts of water are swallowed — at the southwestern Manitoba beach were “well above the recreational water quality objective,” according to Manitoba’s latest weekly beach conditions report, which was issued Friday.

The province issued a second-level algae advisory on Tuesday for Ninette Beach.

Those advisories are issued when microcystin concentrations exceed a certain point, and include a warning that people and pets should not swim, drink or have any other contact with the water.

Second-level algae signs like this are posted when concentrations of toxic algae exceed a certain point. (Province of Manitoba)

The province also issued first-level algae advisories for Patricia Beach on Lake Winnipeg and Plum Coulee Beach, near Winkler, after the number of blue-green algae cells for both were found to be “above Manitoba’s recreational water quality objective.”

First-level advisories caution against swimming or other contact with the water when blooms are present. If an algal bloom has been observed at a beach, a first-level advisory sign remains posted for the remainder of the beach season, the province says.

A sample of of algae blooms found the amount of blue-green algae at Plum Coulee and Patricia beaches was above Manitoba’s recreational water quality target, but microcystin toxin levels were below that target, this week’s beach condition report says.

Sampling is ongoing, the province says.

Levels of the bacteria E. coli are still above the recreational water quality objective at Plum Coulee Beach, according to the province. Beach advisory signs will remain posted for all affected areas.

The province reminds people to avoid swimming in water and keeping pets from drinking the water where severe algal blooms can be seen. Home and cottage owners who use lake water for drinking are also warned that most small treatment systems can’t remove algal toxins, the province says.

More information can be found on the province’s website.

Warm and calm weather, along with relatively high loads of nutrients like phosphorus, provide ideal conditions for blue-green algae to develop, it says.

The algae-causing phosphorus can come from a variety of sources, including household products, farm runoff and under-treated sewage.