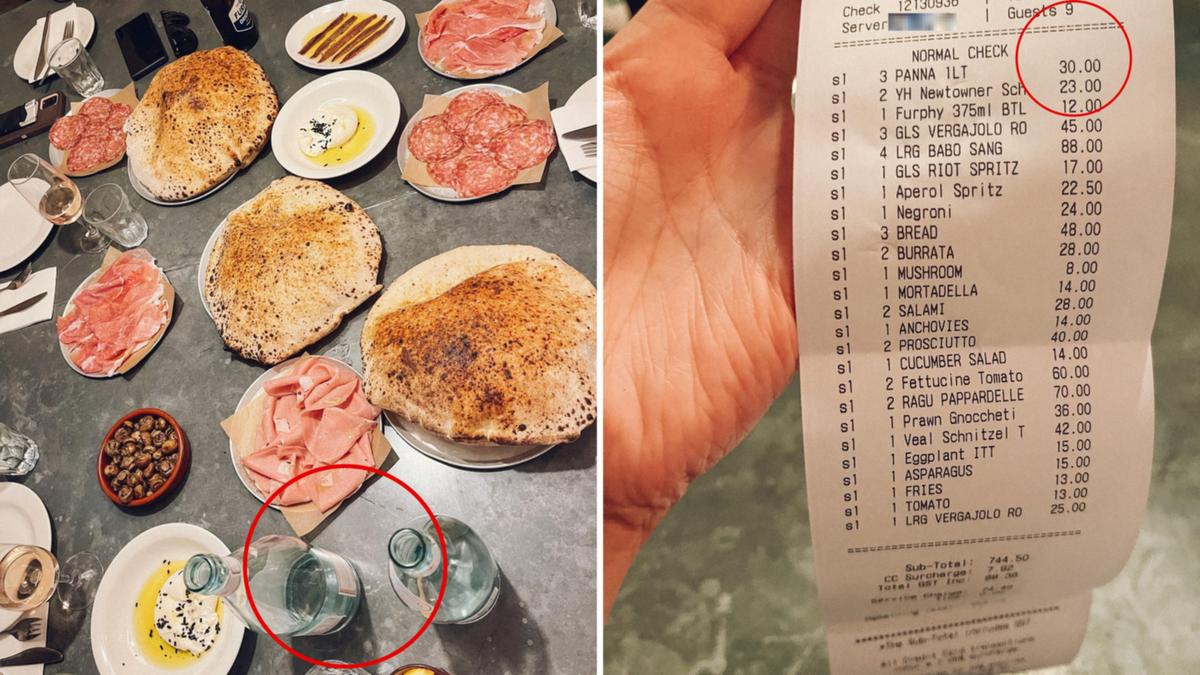 A group of diners is furious after being charged almost $75 for a “mandatory” service fee and $30 for water at a popular Italian restaurant in Sydney – despite already splurging more than $720 on dinner.

The nine friends enjoyed a huge feast – including 13 antipasti dishes, six mains, four sides and drinks – at Merivale’s Bar Totti’s in the CBD on Friday night.

WATCH IN THE VIDEO ABOVE: Woman charged $8.90 for coffee.

But upon checking their bill totalling $826.75, they noticed they were hit with an extra $74.45 for a little-known “service charge” and $30 for three 1L bottles of still water.

“It’s outrageous, it’s basically a mandatory tip. And for what? It was the most basic level of service anyway,” one diner told 7Life.

“The service charge makes no sense.”

She said the group was “more than happy” to leave a tip – but the hidden service charge “ruined” their dining experience.

According to the restaurant’s website, groups of eight or more incur a 10 per cent service charge.

Regarding the water charge, her friend described it as “very sneaky”.

“The waiter brought over the bottles of water, without clarifying, only to charge us for it all at the end,” she said.

“I don’t understand what the service charge is for – what they were doing for us that they weren’t already doing for a group of six or seven? Seems excessive,” the diner said.

She added: “We know restaurants have struggled a lot in the last two years with the pandemic.

“But being charged an exorbitant amount for service and water with no explanation just doesn’t seem fair on customers.”

It isn’t the first time restaurants have been noted charging customers for water.

In September, a couple was stunned after being charged $10.50 for a bottle of water at fine dining restaurant Aria.

Upon receiving their bill, the couple noticed they were charged $10.50 for still water as well as $10.50 for sparkling.

A diner has been left stunned after being charged $10.50 for a bottle of water at one of Australia’s fanciest restaurants. Credit: Reddit

“Decided to splurge a bit and go to a nice dinner for a special occasion at Aria,” one of the couple said in a Reddit thread.

“We don’t really go to these high-end restaurants often.

“I can understand the charge for sparkling but is it normal to charge $10.50 for still water at restaurants at this price point?”

However, many diners warned the customer should have asked for “tap” water instead of “sparkling or still”.

“When the waiter asks ‘sparkling or still?’ you need to say ‘tap’,” one wrote.

”A friend of mine is a manager at a fancy restaurant and yes this is standard practice at high-end places.”

Another said: “I got caught on this a few weeks ago. They asked, ‘Sparkling or still?’, and I asked for tap water, and they countered with ‘do you mean still?’, and my brain in cruise control said ‘Yes’… $11 per bottle.”

One added: “I got burnt by this once, when they asked ‘sparkling or still’.

“I assumed the still would be free. I now know to ask for ‘tap’. My partner chugged all of the water though once he saw the price, he said he was bloated but worth it.”

Another revealed: “Unfortunately fine dining places will always ask you if you want ‘still or sparkling water’. Always ask for ‘tap’ water.”

While one claimed: “Consider yourself lucky. When we ate at a (luxurious) restaurant in Melbourne, we had an unexpected $75 in the bill for still water. We nearly died.”

Lawyer Traci Chen ordered a soy latte for $8.90 at a hotel bar inside Crown Tower in Barangaroo Credit: migrationlawyer/TikTok

Earlier this year, a migration lawyer revealed the surprising amount she was charged when she ordered a cup of coffee.

Traci Chen, from Melbourne, ordered a $6 soy latte at a hotel bar inside Crown Tower in Barangaroo when she was visiting Sydney in March.

Speaking to 7Life at the time, Traci said she “didn’t mind too much” about the price – but she knew the coffee cost “more than usual”.

“It was just an average cup of coffee,” she said.

Traci said she normally makes her own coffee at home – but she was on holiday, so she treated herself.

She thought her cup of coffee was expensive until she spoke to a friend who revealed she recently paid $10 for a “one size” cup of brew in Brisbane.

How British backpacker travelling around Australia in a van feeds herself on $3.30 a day

Single man walks out of a first date after learning about woman’s dietary requirement.

Single man walks out of a first date after learning about woman’s dietary requirement.