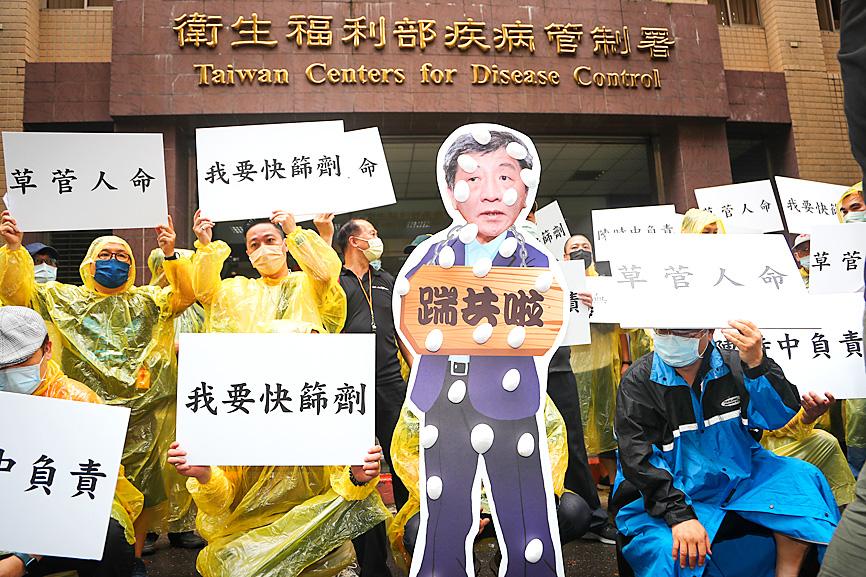 About 100 taxi drivers yesterday protested in front of the buildings housing the Central Epidemic Command Center (CECC) and the Ministry of Transportation and Communications (MOTC) in Taipei, demanding that the government ensure sufficient supplies of COVID-19 rapid test kits for drivers.

The government launched a rapid test kit rationing scheme on April 28, fixing the price at NT$500, with each kit containing five rapid tests. However, supplies are limited, with long lines forming at pharmacies that sell them.

On Thursday last week, some supermarkets and other retailers also began selling COVID-19 rapid test kits for NT$180 apiece, but many have complained about the price.

The protest was organized by the Taipei City Taxi Drivers’ Union and an industrial union representing shuttle service by appointment on digital platforms.

Peng Chih-yuan (彭芝園) from the industrial union said that other countries provide the kits to citizens for free, while the Taiwanese government “sells them for NT$180 per kit.”

Passengers would ask her whether she had taken a rapid test, and would complain if she said no, KiKi said.

They would ask “Why don’t you have a test since you have contact with so many people?” or “How can you prove that you are virus-free without taking a test?” she said.

The protesters said that some passengers would even get exit their cab and take a bus or walk home because they considered it too dangerous.

Aside from testing kits, many drivers have encountered difficulties buying antipyretics and can only drink salted water when they have a fever.

Taxi driver A Mu (阿沐) said that he lives with his 80-year-old father, 75-year-old mother and a second-grade son, and he is afraid of passing on the virus to them.

He said that he already spends a few hundred dollars every day to disinfect his taxi, and buying rapid test kits would further reduce his income.

The two unions presented four appeals to the government: replace quarantine with rapid tests to allow people to return to normal life; ask the CECC to provide enough kits for taxi drivers to ensure drivers’ safety and put passengers at ease; order the MOTC to increase the number of disease prevention taxis; and grant further subsidies to help transportation service providers survive.

The protesters were upset to see only a ministry section chief show up to accept their petition and no representative from the CECC.

Well Lee (李威爾), a spokesperson for the labor union, tore down a cardboard cut-out of Minister of Health and Welfare Chen Shih-chung (陳時中), who heads the CECC, and said they would consider more drastic measures during their next protest, such as besieging the CECC with their taxis and throwing eggs.