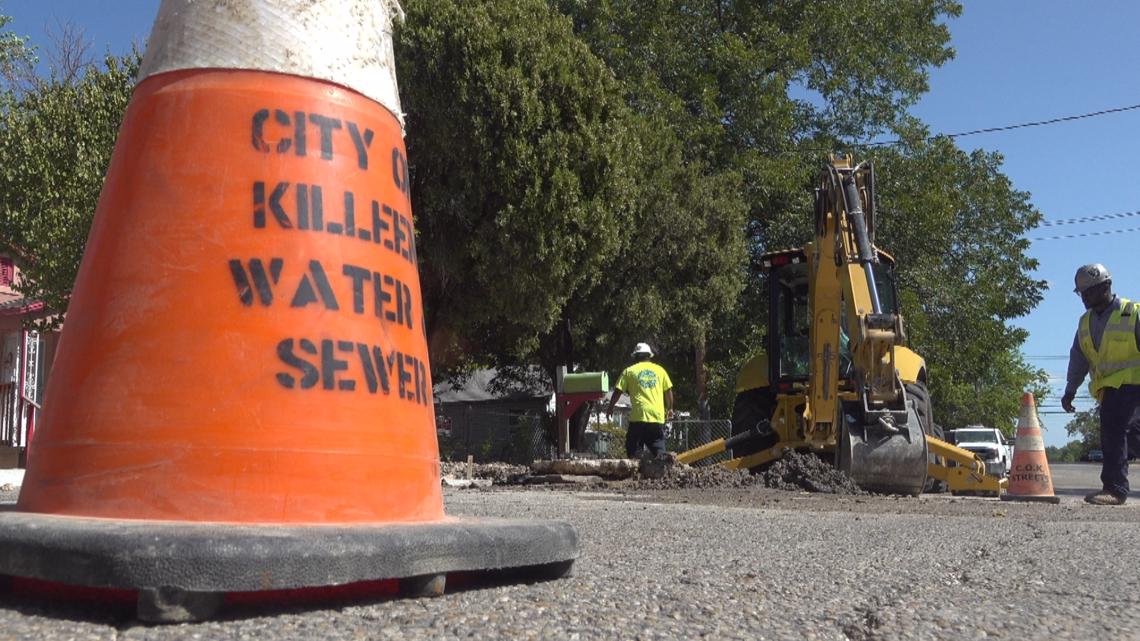 The extreme heat, drought conditions and high usage have caused the ground to shift making it optimal conditions for pipes to burst.

KILLEEN, Texas — Under the hot Texas summer sun, grass is dying, rain is nowhere to be found and what a city crew would consider a bad sign is becoming all too common.

A stream of water rising from below can be seen on streets across Killeen as water main breaks and leaks surge this summer.

“With the extreme weather that we have going on right now is definitely a busy time for water and sewer,” said Killeen’s Executive Director of Public Works Jeffery Reynolds.

Reynolds said the high temperatures and drought conditions Central Texas is facing is creating optimal conditions for pipes to break.

“Depending on the soil, the age of the pipes and the extreme dry weather — it causes those pipes to shift,” he explained.

Killeen crews worked 111 water main breaks in the last fiscal year, but they have already hit it this time around with two months to go in the current fiscal year.

Which has work overflowing for Chris Gambles Jr. and others who are part of the city of Killeen’s Water and Sewer Division.

“We do a lot of things live and under pressure to prevent contamination or any of that from happening,” Gambles Jr., a supervisor of the division, explained.

Meanwhile, Killeen residents are using 16 to 23 million gallons of water a day and even 28 million on the high end. Reynolds said usage is another leading cause to water main breaks and leaks.

“You have a lot of more usage of the water system because sprinklers, pools being filled so, the pressure on those lines increases tremendously,” he explained. “The demand on the system is a lot greater so we have to just do our best to keep up.”

The heat is not only hurting the 700 or more miles of pipes underground but also those on the job.

“It’s taxing on these guys, mentally and physically to be out there,” Reynolds said.

Crews are working extra hours as they’re deep in jobs. With more water main breaks and leaks, some crews are even being called in after normal hours.

“We never want your water quality to be bad and we work long, strenuous hours because we care,” Gambles Jr. said.

The City of Killeen has been in a water line rehab program for eight years now, which replaces lines throughout the city. It will help decrease water main breaks as a lot of older pipes tend to break or leak.

The city has asked Killeen residents to follow the Stage 1 Drought Contingency and Water Conservation Plan that was put in place Tuesday as it will help ease pressure on pipes.