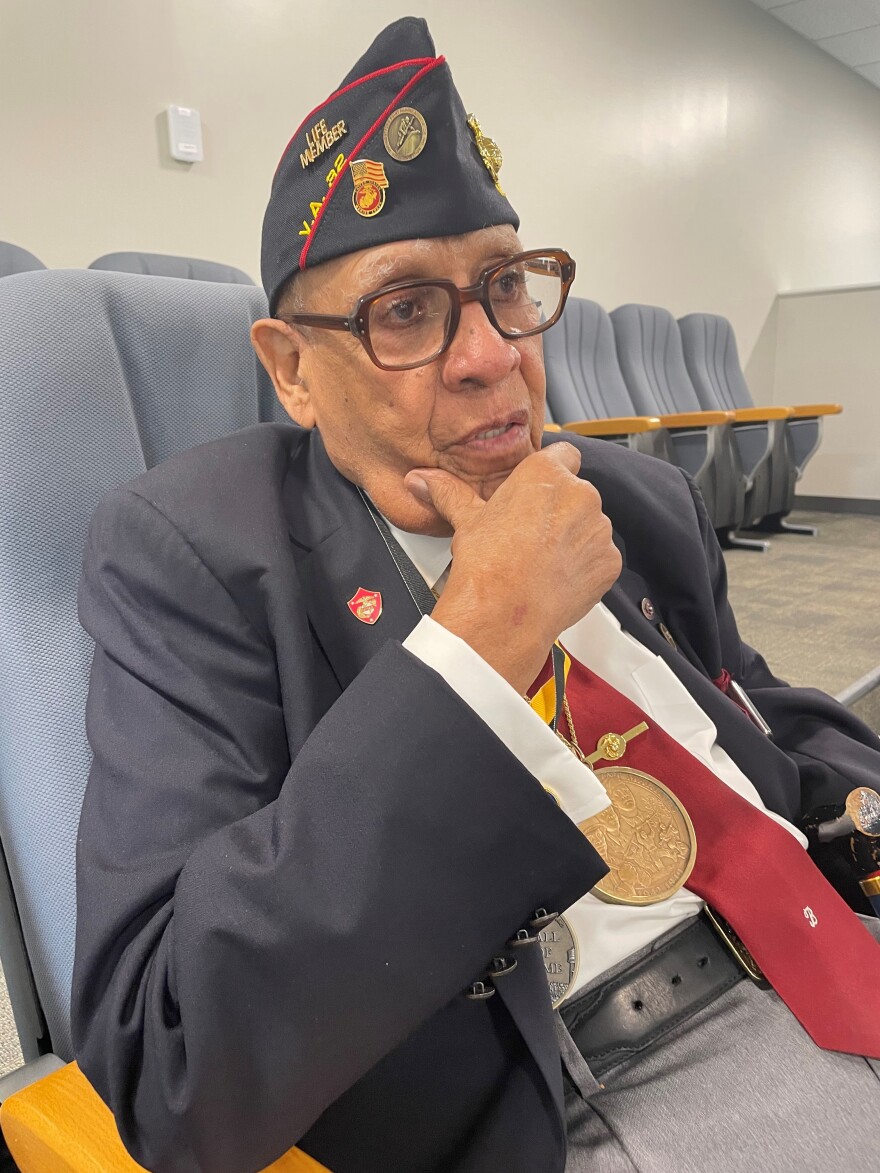 A project to restore key buildings used by the first Black Marines — and protect the structures from the effects of climate change — is nearly complete.

During the 1940s, about 20,000 men trained on a racially segregated base in North Carolina known as Montford Point. It’s now part of Camp Lejeune and called Camp Johnson.

The men who made the buildings worth saving are nearly gone. But a handful of the 300 or so surviving Montford Point Marines came back in late April for the reopening of the freshly-restored museum honoring them, in what was once their mess hall.

Retired First Sergeant William McDowell, who goes by “Jack,” flew in from Long Beach, Cal. He said the restoration is important to the Marines and the nation.

“I’m not one to dwell on the past,” he said. “On the other hand, I think from our historical purposes and educational purposes, it’s a good idea to keep in the minds of folks the way things used to be and the way they are now.”

“There was a time when the Marine Corps would have rather the fact that it was racially segregated was forgotten about,” he said.

Montford Point Marine Association officials said the Corps treated them like a partner in the restoration project. The Navy and Marines also consulted with the North Carolina Historic Preservation Office.

Dozens of buildings from the Montford Point era had to be demolished after Hurricane Florence pounded Camp Lejeune with heavy winds and three days of record-breaking rain in 2018.

Veterans celebrate the official opening of the Montford Point Marine Museum at Camp Lejeune, N.C., April 30, 2022. The museum is located in a restored building that was once the mess hall for the nation’s first Black Marine base.

Many old Montford Point buildings were badly damaged and sat too close to the lower New River, where flooding and storm surges are getting increasingly common.

“We look at climate change as a readiness issue,” said Navy Commander Ross Campbell, Camp Lejeune’s Public Works Officer. “We’ve got to look at sea level rise and make sure that structures that we have at the water’s edge are ready to ready to respond to climate change events.”

The restoration plan will save and renovate five important buildings, including the museum and gymnasium. The gym is the last to be restored, and it’s nearing completion. The military also will fully rebuild the chapel, which was too damaged to save.

Campbell says the goal was to save buildings that are historically significant and useful to the units using the base now, and make them much less vulnerable to effects of climate change.

Veteran Carroll Braxton, 97, said Black Marines were treated “as if we weren’t human” at Montford Point in the 1940s.

“The ability to renovate these buildings was taken holistically, not only as an opportunity to bring it up to the current mission set, but also to look at resiliency from the complete spectrum,” he said. “Not only storm, climate change, but energy efficiency and building efficiency, and building health as far as indoor air quality.”

In practice, that means the surviving Montford Point buildings are being shored up – their wood replaced with waterproof materials, their shingles replaced with wind-resistant metal roofs.

The white, weatherproof cement-based siding was chosen to look like the original painted wood planks, and metal roofs are colored as close as possible to the original shingles.

And the heating and cooling systems in the buildings have been significantly upgraded to use less energy and prevent mold and wood rot from the area’s infamous humidity.

“It was a swamp right near where we was,” Braxton said. “The drill instructors would take us right by that swamp and make us stand at attention. And he would say, ‘You N-words, did you eat?’”

Braxton said the bites were so bad that when he went home on furlough, his mother thought he had small pox.

The verbal and physical abuse directed at the men seemed endless, he said. Some recruits were forced to smoke with buckets on their head and blankets over the buckets. He heard one man was forced to drink his own urine.

The Marine Corps was the last service to allow Black recruits and didn’t do it willingly. It happened only after an order from President Franklin D. Roosevelt.

Melton McLaurin, an emeritus professor of history at UNC-Wilmington, is the author of The Marines of Montford Point.

He said the Commandant of the Marine Corps at the time, Major General Thomas Holcomb, made his feelings clear.

“He said if he had a choice between 250,000 Black Marines and 5,000 whites, he would take the whites,” McLaurin said. “They didn’t want anything to do with African American Marines.” 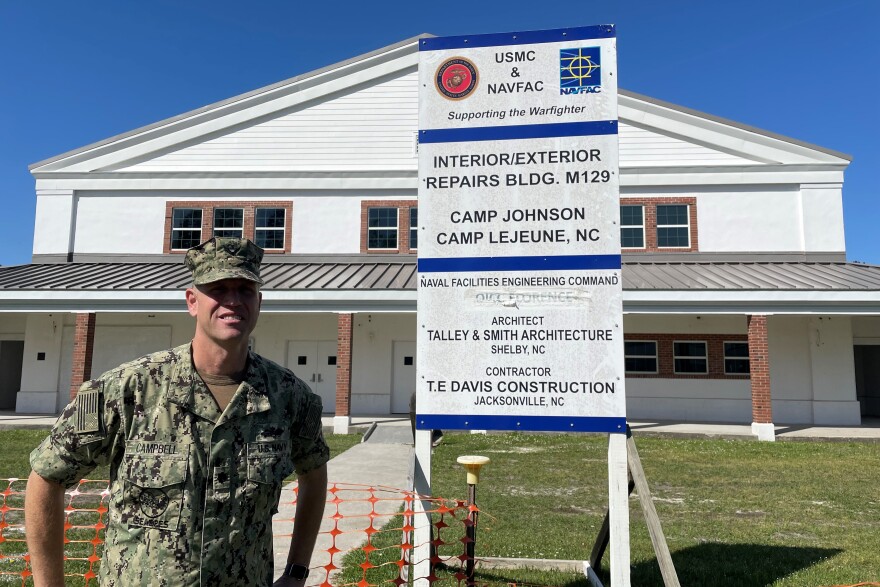 Jack McDowell, the retired first sergeant, came to Montford Point from his native Brooklyn and had a lower tolerance for racism than some of his Southern counterparts. He said he was once arrested and jailed in neighboring Jacksonville because he refused to yield the sidewalk to a white sailor.

But he stuck with the Marines for more than 23 years, serving in three wars and earning three Purple Hearts. He said he would have stayed in longer if he hadn’t lost a leg after being wounded in Vietnam.

His time in the service encompassed a long stretch of the Corps’ early struggle with race, and he has story after story that illuminates it.

“As quiet as it’s kept, on the islands of Iwo Jima and Okinawa, there were African-American Marines there,” he said. “And in Okinawa, there were a couple of thousand. But if you saw any photos or movie reels or newsreels or any movies that they made about it, you never saw any Black guys.”

He’s gleeful about one piece of that forgotten history.

“I might say that when they ran out of blood and asked for people to donate blood, that a whole lot of white guys are running around with African American blood,” he said.

During the Korean War, he became one of the first 50 Black Marines sent to desegregate white units.

“I ended up being charged to 28 white guys, he said. “It’s 1950, and most of them didn’t even know Black guys were in the Marine Corps. And all of the sudden, here’s one and he’s my boss.”

“The sergeant that I relieved was rather belligerent,” McDowell said. “He kept using the N-word, so we had to come to knuckle junction two or three times. More busted lips and black eyes. We fought, and the Koreans thought we were nuts.” 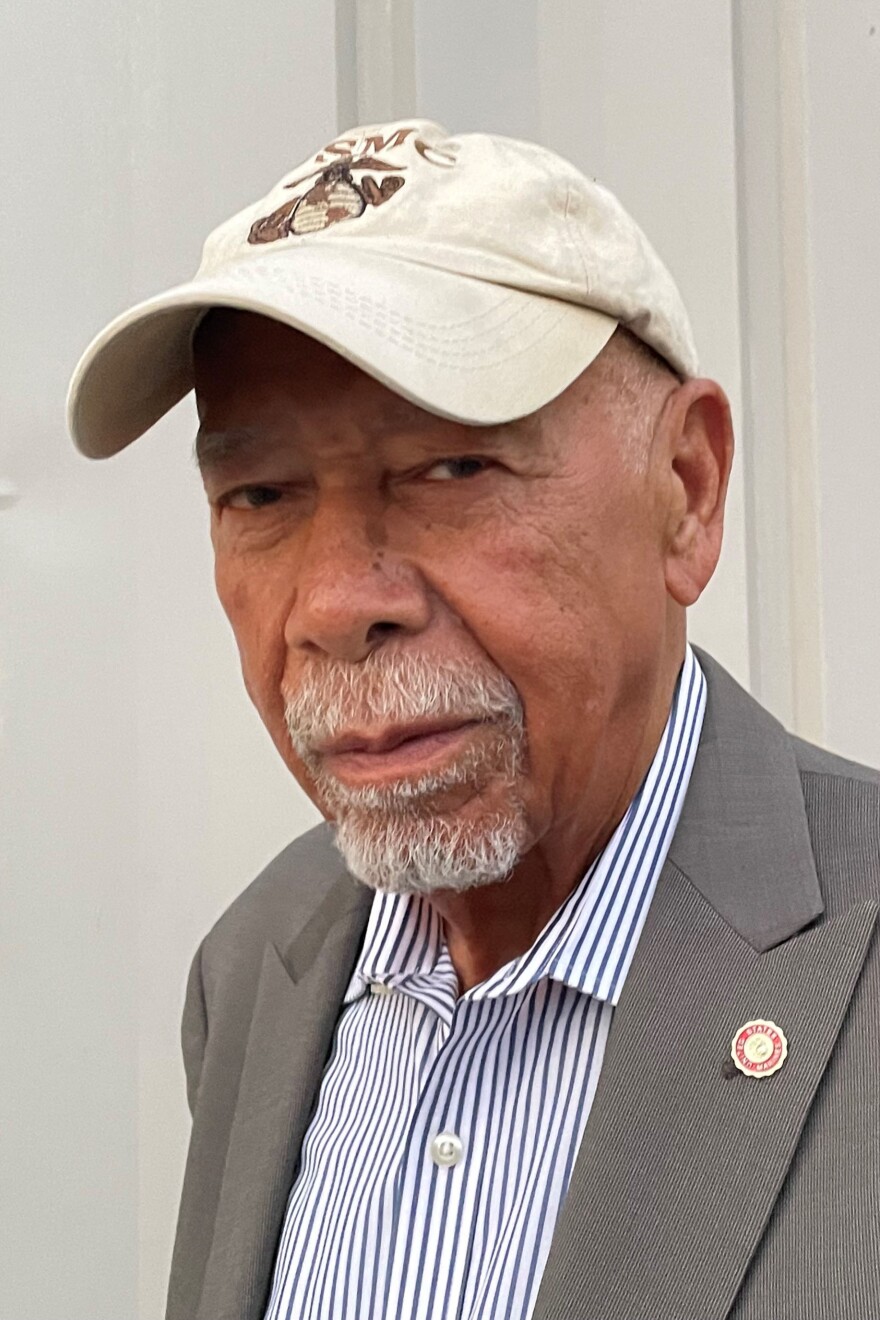 Retired Marine Jack McDowell, 94, worries that after all the Montford Point Marines are gone, their significance may be lost, too.

Months later, McDowell was wounded. And that same sergeant ran to help carry him to safety.

“And complaining all the way, you know, using the N-word,” he said.

Later though, after the war, the sergeant asked to work with McDowell, and they became close enough that McDowell later traveled to the man’s funeral.

He said some Montford Point Marines remain bitter about their time there. But he said race relations in the military have improved greatly, and he and many of the other early Black Marines went on to better lives in part because they went through Montford Point.

“It helped me in many, many ways,” McDowell said. “It gave me the ambition to go to school and get a degree…. the combination of that, plus the schooling, I found out that I wasn’t afraid to make decisions.”

At 94, McDowell said he knows this could be his last visit to his old boot camp. And he fears that after all the Montford Point Marines are gone, their significance may be lost, too.

“As time goes by, I think this whole business of Montford Point becomes fuzzy,” he said. “You know, that whole business will sort of fade into oblivion.”

But some of the buildings they used will stand as a reminder. Now armored better against time and storms.

This story was produced by the American Homefront Project, a public media collaboration that reports on American military life and veterans.Funding comes from the Corporation for Public Broadcasting.