Amid an ongoing pandemic, a climate and natural world in crisis, and a myriad of tensions and conflicts threatening many communities, there was no shortage of critical stories for High Country News to cover in 2021. Despite the challenges that come with work — and life — these days, our contributing photographers found inventive ways to show us the complexities of the Western U.S. with beauty, poeticism and nuance. We’re proud of the visual storytelling that graced HCN’s pages this year, and are grateful for all of the hard work and powerful images our collaborating photographers contributed to the magazine. Before we flip our calendars to January, we pause for a moment to celebrate and share a few of our favorite images from throughout the year.

January
Mette Lampcov’s powerful cover photo set the tone for 2021. It was drawn from her images illustrating Mark Olalde’s investigation into why, after so much money has been spent, so little work has been done to restore the Salton Sea and address the environmental health concerns of nearby residents.

Lisette Lopez rides her bike in the strong wind that blows in her neighborhood in Salton City, near California’s Salton Sea.

February
Dan Winters’s stunning black and white photo of a coal train fading into the distance was the perfect image for our issue-wide exploration of the end of coal in the Western U.S.Cassidy Araiza’s images from the demolition of the Navajo Generating Station in Arizona captured the end of an era, while Sage Brown’s intimate portraits of workers from the Boardman Coal Plant in Oregon allowed readers to empathize with those impacted by the plant’s closure this year: people who relied on the plant for a paycheck despite what most recognize as a necessary transition to green energy. And HCN associate photo editor Luna Anna Archey’s portrait of life at the Tenacious Unicorn Ranch showcased the joy of this unique LGBTQ+ community-run alpaca ranch in rural Colorado. 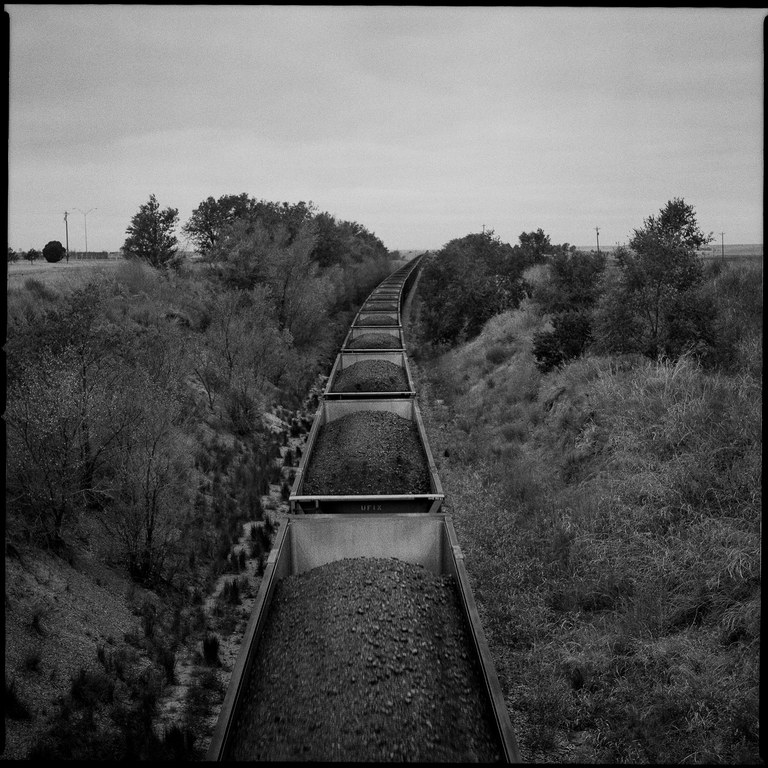 A train loaded with coal travels through West Texas. Since its peak in 2007, coal use by U.S. power plants has dropped by half. 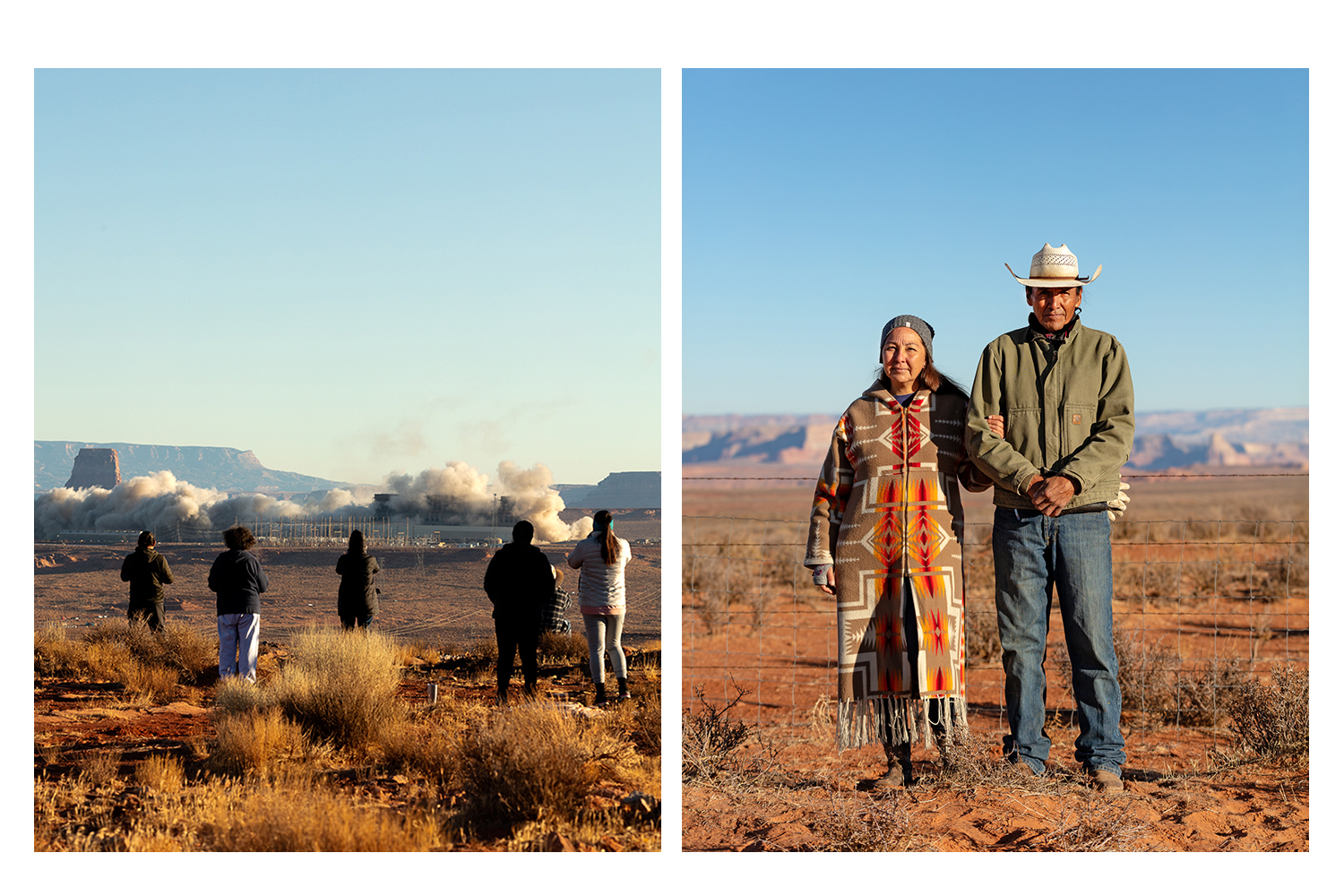 Kyle Davis, a mechanic and machinist. “I felt like what we were doing was a good thing. It was valuable and then all of a sudden it was like: Well, it’s not valuable anymore. Coal’s been good to me. I think it’s been good to the Northwest. I hate to kick it too hard under the curb.” (left). The control system at the head of Boardman’s main turbine (right). 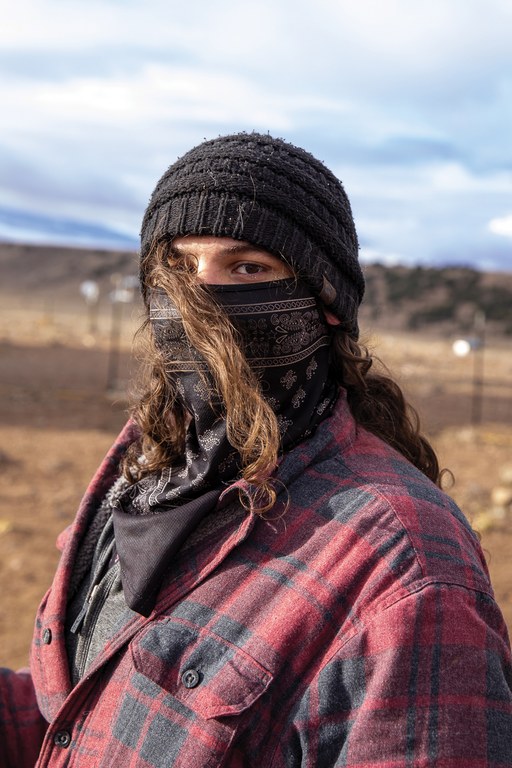 Justine pauses for a portrait while caring for the ranch’s sheep. “I started the watering because it was needed, but then I realized I was doing it because it got me out of bed,” she said. Balbir Singh drives a tractor in Karm Bairn’s orchard in Gridley, California, where Punjabi American people have farmed for more than a century.

April
Photographer Angie Smith was the perfect choice for the assignment to photograph associate editor Emily Benson’s feature story about a conflict over proposed development in McCall, Idaho. Smith has family in the small community and had spent time there throughout her childhood. Her connection to the town came through in her lovely images of the winter landscape. Tom and Edie Welty and Jeff Canfield snowshoe on Payette Lake, below Parcel G, one of the endowment land areas that was part of a proposed land swap. The three are part of a local group working to protect the lands that surround much of the lake in McCall, Idaho. (Editor’s note: In August, the state denied the land exchange, halting development plans for now.)

May
Images from an epic ecological survey of Arizona’s Atascosa Highlands by photographer Luke Swenson and ecologist Jack Dash filled the center of the magazine, and offered a rare perspective on the highly politicized U.S.-Mexico border. From sweeping landscapes to taxonomic still lifes of flora, their photos gave readers a chance to consider the Borderlands on its own terms — a place full of beauty and life, in which the border wall is almost an afterthought, destructive as it is. 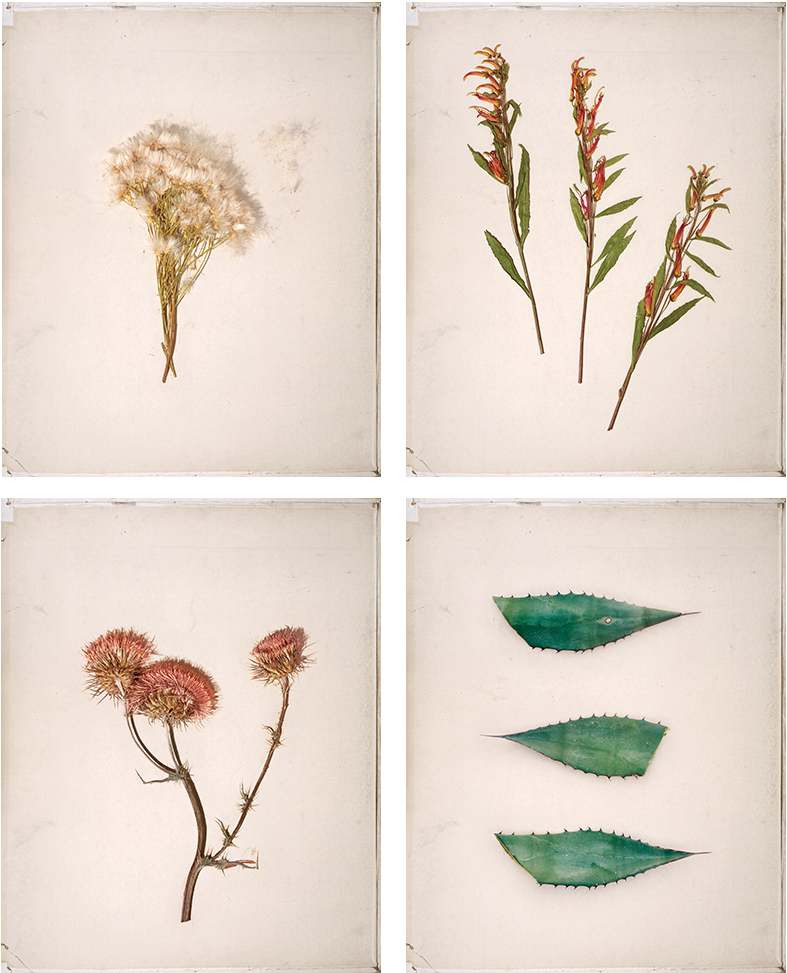 June
Brian Adam’s subtle portrait of Eva Dawn Burk opened up a story about Alaska Native-led efforts to alleviate food insecurity in rural communities. Elsewhere in the issue, HCN photo editor Bear Guerra’s black and white images conveyed a sense of foreboding for Sarah Tory’s report about a possible future without enough water in Phoenix, Arizona — one of the fastest growing urban areas in the West. And Rebecca Stumpf’s thoughtful images for the feature cover story conveyed the complexities one Idaho community faces as its residents debate how best to protect themselves from wildfires. 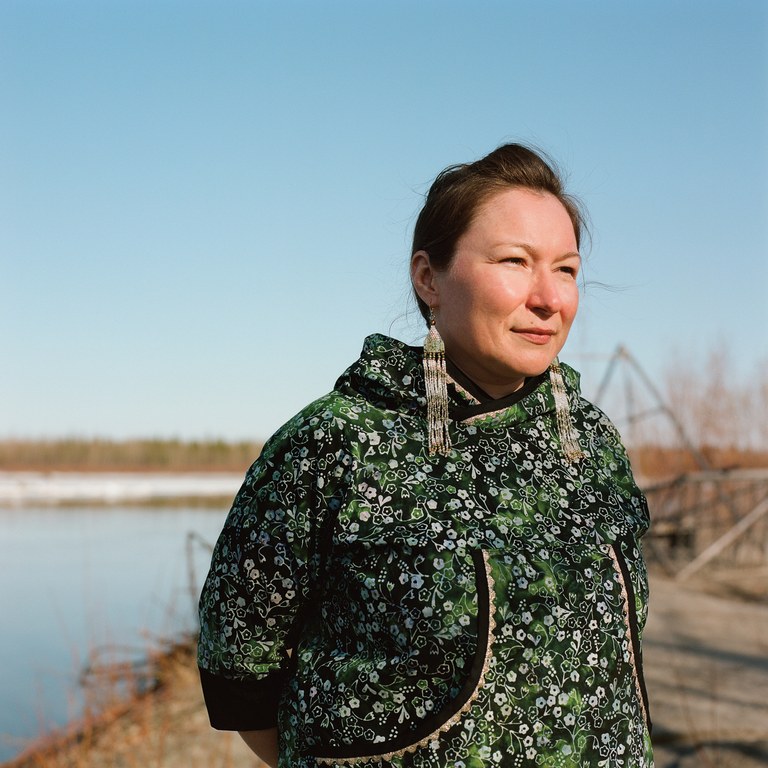 Eva Dawn Burk stands on the bank of the Tanana River in late April in her home village of Nenana, Alaska. Burk, a graduate student at the University of Alaska Fairbanks, is developing biomass-heated greenhouses for rural Native communities. 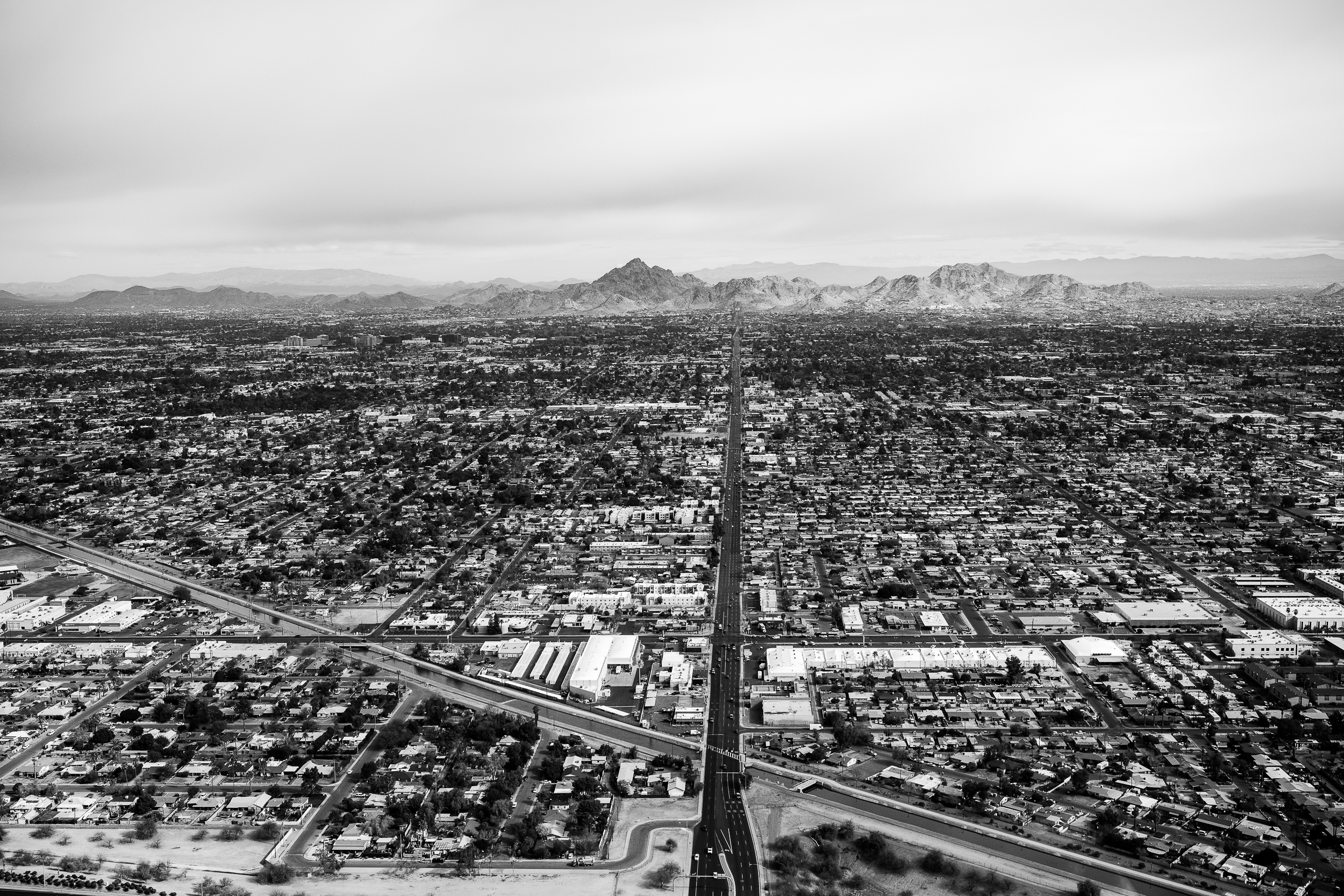 Phoenix is the “least sustainable city on earth,” according to lawyer, academic, and Phoenix resident Grady Gammage Jr. in his 2016 book “The Future of the Suburban City”. 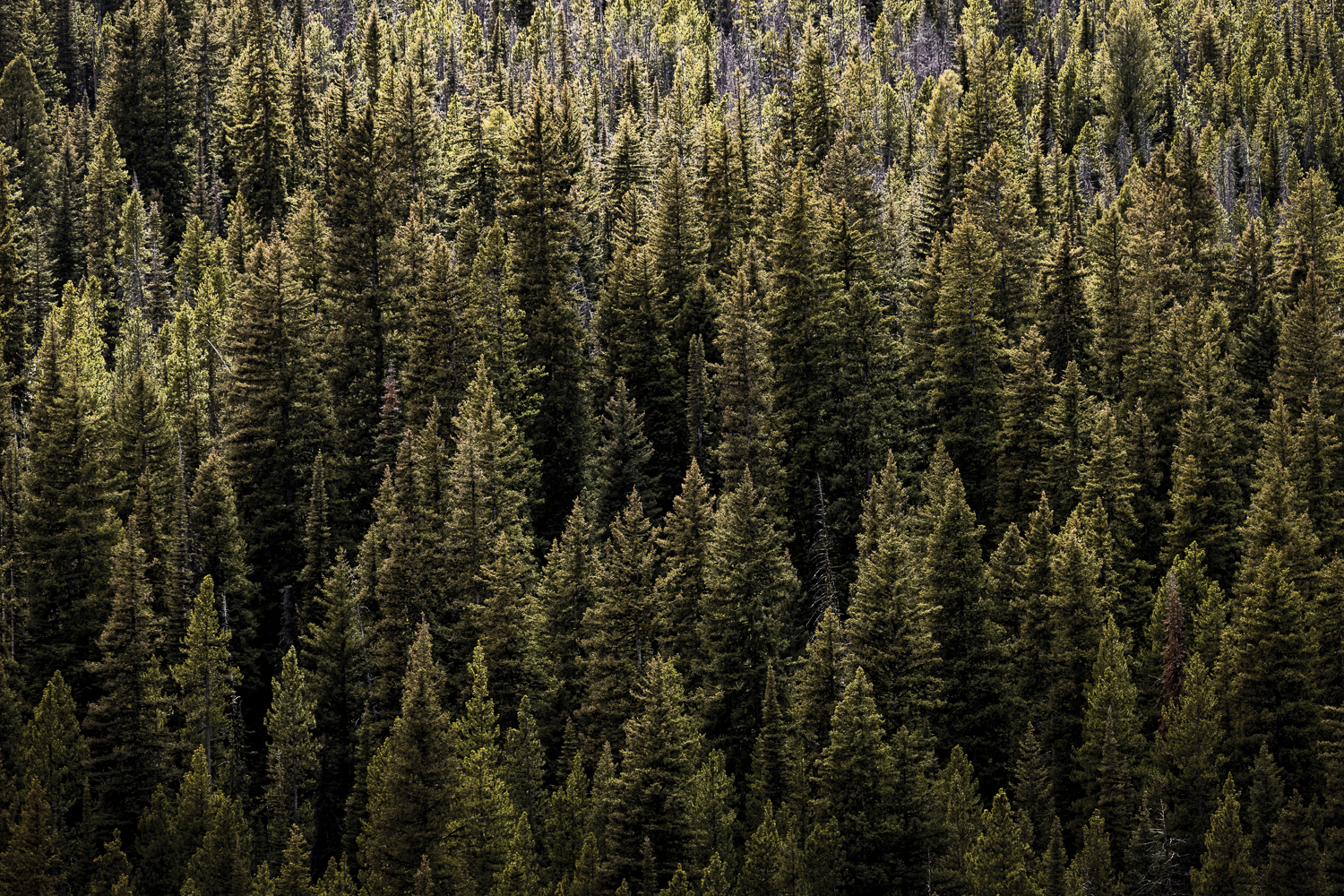 Chuck Mark, forest supervisor with the U.S. Forest Service in Salmon, Idaho, sees wildfire as inevitable. Mark is doing everything he can to treat the timber on the mountains here in order to prevent future fires from destroying towns.

July
HCN photo editor Bear Guerra’s portrait of Hualapai tribal elder Ivan Bender helped to connect audiences with what’s at stake for one Indigenous community facing a proposed lithium mine near a sacred landscape in Arizona. And Stella Kalinina’s beautiful photo essay celebrated efforts by communities in Los Angeles — many of which are park poor — to reclaim industrial sites and convert them into green spaces. 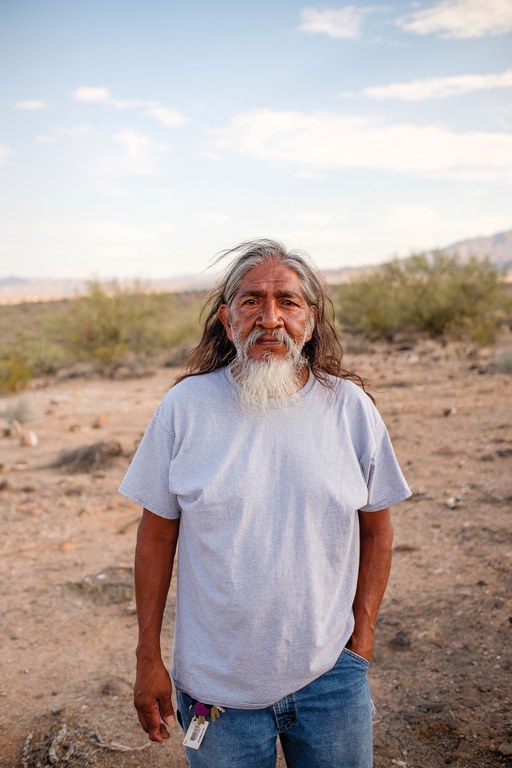 Ivan Bender, the caretaker of the Hualapai Tribe’s Cholla Canyon Ranch, was the first to realize that Australian company Hawkstone Mining Ltd. was conducting exploratory drilling around the perimeter of the tribe’s property. The Chen Lin brothers at Los Angeles State Historic Park in Chinatown in LA. The former Southern Pacific rail yard opened to the public as a park in 2017.

August
August’s feature investigation detailed how a Minnesota-based mega-dairy is expanding its operations into southern Arizona, and potentially sucking an aquifer dry in the process. An aerial image by Lucas Foglia conveyed a sense of the scale of the operation — and reminded readers that this is happening in a desert. Wrapping up the issue was Minesh Bacrania’s striking portrait of musician, poet and elementary school teacher Steve Von Till in the forest near where he lives in Idaho — one of our favorite back cover #iamthewest portraits of the year. (Note: #iamthewest portraits are currently not available online except in our digital edition, which is accessible to subscribers.) 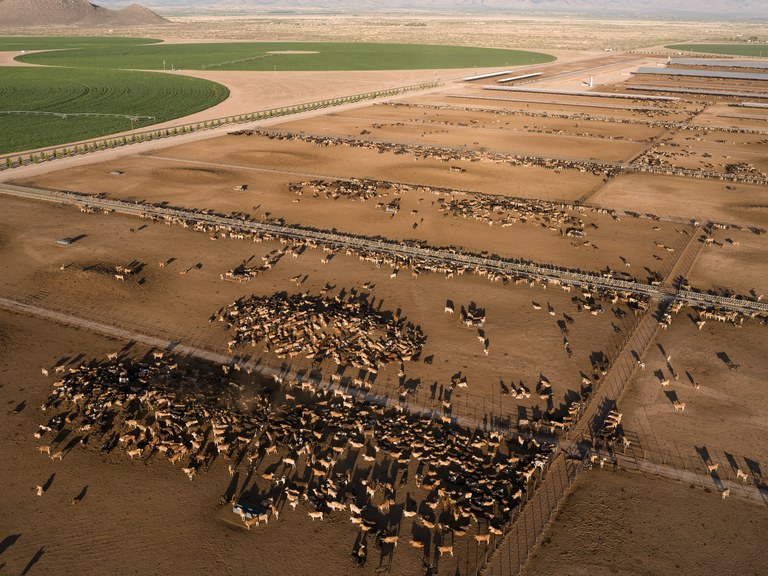 The Coronado Dairy on Kansas Settlement Road in the southeast corner of Arizona. Riverview LLP, a Minnesota-based dairy, has been buying up land and drilling new wells to grow feed for its cattle. Steve Von Till, photographed near his home in Spirit Lake, Idaho.

September
Beth Wald’s images brought readers along for the journey HCN associate editor Paige Blankenbuehler explored in her epic feature story about gray wolves and the Green River Corridor between Wyoming and Colorado. Wald’s photographs painted a nuanced portrait of this rugged landscape, while illuminating the many obstacles faced by gray wolves as they move through it. Sunrise over the Green River in the Browns Park area where Utah, Wyoming and Colorado meet. After a morning of herding cows, diners eat breakfast in the restaurant of the Kendall Valley Lodge, near the Upper Green River outside of Pinedale, Wyoming. The many trophy heads and skins adorning the walls came from animals shot by the lodge owners.

October
Tailyr Irvine’s delicate images illustrate this issue’s cover story by HCN editorial intern Kylie Mohr, which highlighted a grassland restoration effort connecting Aaniiih and Nakoda tribal youth with the landscape around their homes on the Fort Belknap Indian Reservation. And after her own family was impacted by the 2020 wildfires around Talent, Oregon, Alisha Jucevic returned over the next year to document how the community was fairing in the aftermath. Her powerful images show pain, joy and resilience as families rebuild. After they lost their homes in the Almeda Fire, Marco Rodriguez (left), his wife, Angelina Camargo, (second from left), and Angelina’s brother, Marcelo Camargo (second from right), pooled their insurance money to purchase a single home in Medford, Oregon. The family gathered there on December 26, 2020. “It feels so nice to have a house for Christmas and a safe place for my kids.”

November
Russel Albert Daniels’s aerial photo of a toxic waste pit at the White Mesa Mill in Utah — the nation’s last active uranium mill — was the striking introduction to former HCN staff writer Jessica Douglas’s investigative feature on environmental health concerns by neighboring residents from the Ute Mountain Ute Tribe. As it turns out, the photo and story tipped off the Environmental Protection Agency that something was amiss in how the mill was storing its waste, and the agency ordered a halt to accepting more waste. According to The Salt Lake Tribune, “Signs of trouble surfaced in October when High Country News posted aerial photos of the storage cells, showing one with most of its contents exposed. The Utah Department of Environmental Quality then notified the company that exposed waste in one of White Mesa’s 40-acres cells could constitute a violation of the Clean Air Act.”

December
Another powerful cover image by Russel Albert Daniels led HCN’s final issue of 2021. It was drawn from his work illustrating Stephen Lezak’s feature story on efforts to balance the reintroduction of bison with the politics of wild horse management on the Wind River Reservation in Wyoming. 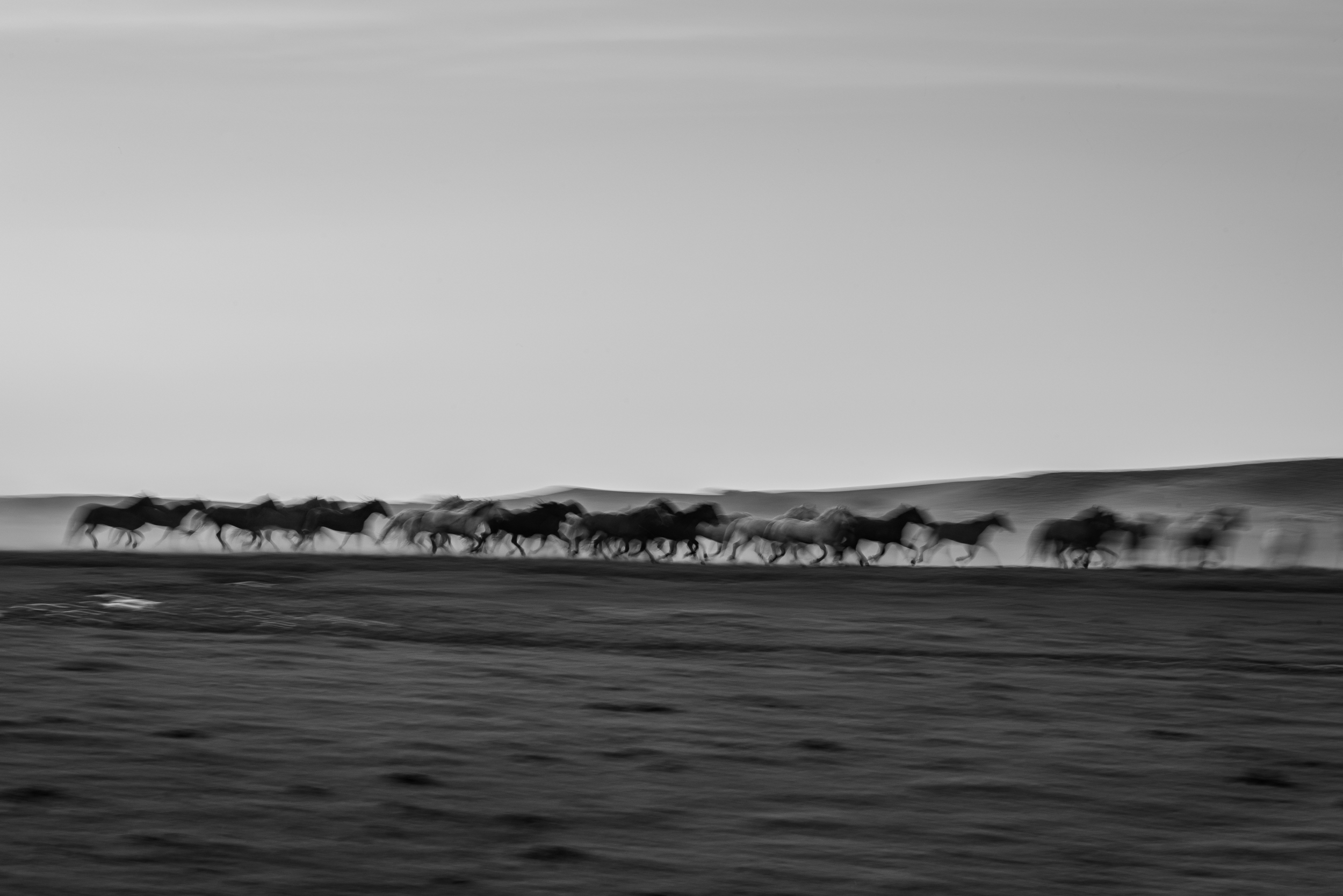 We welcome reader letters. Email Bear at [email protected] or submit a letter to the editor. See our letters to the editor policy.