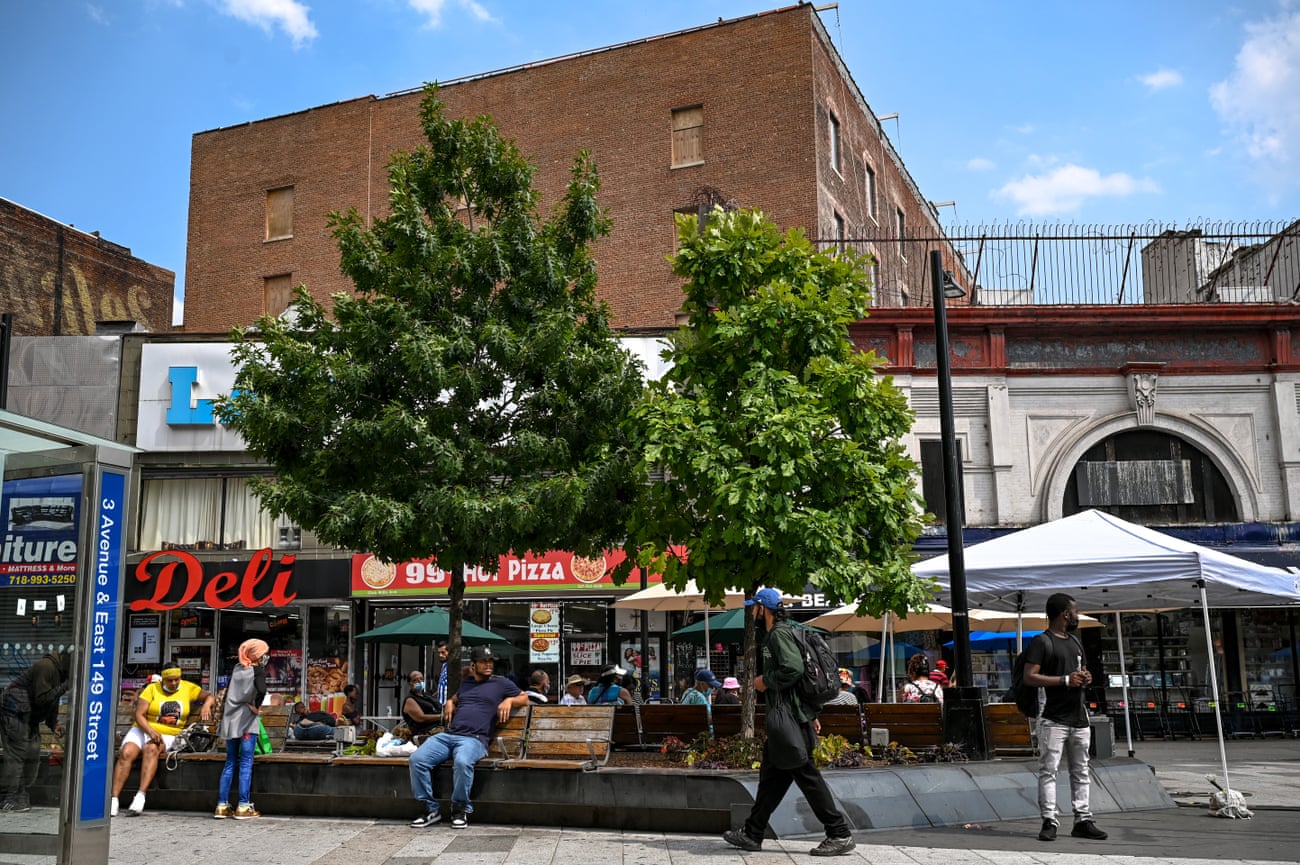 It was a warm July morning in New York City, and at 6am on a Saturday, barely anyone was outside. But huddled in a lush community garden in the Bronx, a dozen volunteers were awake and ready to set out on an important fact-finding mission: are wealthier neighborhoods less burdened by heat?

Equipped with heat sensors, this group of citizen scientists were participating in a groundbreaking study: the first ever street level assessment of heat in New York City. The goal was to find differences in neighborhoods – which communities were relatively cool? Which were sweltering hot? – and map the city’s heat inequality.

Melissa Barber, a researcher and co-founder of South Bronx Unite, works with a volunteer on the heat mapping project in the Mott Haven neighborhood of the Bronx, New York.

Joined by others in upper Manhattan and Harlem, the volunteers scanned temperatures along the streets with sensors attached to their cars and bikes. The results, presented to community members in January, showed a harsh reality of city living: the south Bronx was 8F (4.5C) hotter than the Upper West Side and Upper East Side, some of the city’s richest neighborhoods, just a few miles away.

“The variation in temperature is stark,” said principal investigator Liv Yoon. The data was analyzed by Climate Adaptation Planning and Analytics Strategies and is part of a nationwide heat-mapping initiative by Noaa. “The built environment really matters on how heat manifests and what people feel,” said Yoon.

The results mirror what residents and researchers have known and brought attention to for years: in cities like New York City, heat is distributed unequally – and people of color and low-income residents shoulder the highest burden of heat. Poor air quality, inadequate access to cooling and air conditioning further exacerbates the likelihood of heatstrokes and deaths from heat exposure. There are approximately 370 heat-related deaths in New York City on average each year, with the Bronx being especially vulnerable.

New York City has about 370 heat-related deaths each year.

Heat is especially severe for people with pre-existing conditions such as heart disease, and as higher night-time temperatures prevent people from recuperating overnight, it is also driving a rise in sleep-related mental health problems.

Some residents, who have been living in close proximity to sweltering asphalt and further away from parks and trees, may not be surprised by this. “The thing is, we already knew where the hotter areas were,” said Yoon. “What we wanted to contribute is connecting the dots.”

Environmental advocates say the data, because of how granular it is, can help make the case that certain neighborhoods need better resources and access to green space.

“We have always gotten the brunt of the city’s pollution,” said Melissa Barber, researcher and co-founder of environmental justice group South Bronx Unite.

The difference in temperature between the south Bronx and the Upper West Side reflect a myriad of other environmental inequalities. There are five major highways that run through and around the south Bronx, including the hulking Cross Bronx Expressway, which contributes to the surrounding area’s noise and air pollution. Despite being bounded to the south by the Harlem River, the waterfront in the south Bronx is so developed that residents cannot readily access the blue space. Meanwhile, the Upper West Side sits between Central park and Riverside park, which looks out on to the Hudson River.

Asphalt roads and densely built buildings in cities trap heat. These urban pockets of heat can also overlap with other health disparities: the south Bronx has one of the highest asthma rates in the country. Residents here also live in housing that tends to trap heat, and where the median age of apartment buildings is nearly 90 years.

“These spaces are not only deprived because of the heat they’ve acquired, the existing infrastructure is failing as well,” said Satpal Kaur, an architect who volunteered in the heat-mapping survey.

Higher heat inside and outside a home owes to a combination of factors, including old housing stock, a lack of trees in the south Bronx and Harlem, and building efficiency factors – like a “leaky envelope” which allows outdoor air to infiltrate and indoor air to escape, said Kaur.

“Because they’re not super tight buildings, heat actually rises up, and they just feel more stuffy and humid,” said Kaur in reference to old buildings without central air conditioning.

One of the solutions to mediating this is retrofitting existing structures to be more energy-efficient and installing split-unit air conditioners – which are mounted on a wall and designed to cool larger spaces – instead of window units that aren’t as effective at cooling down the entire surface of the home. 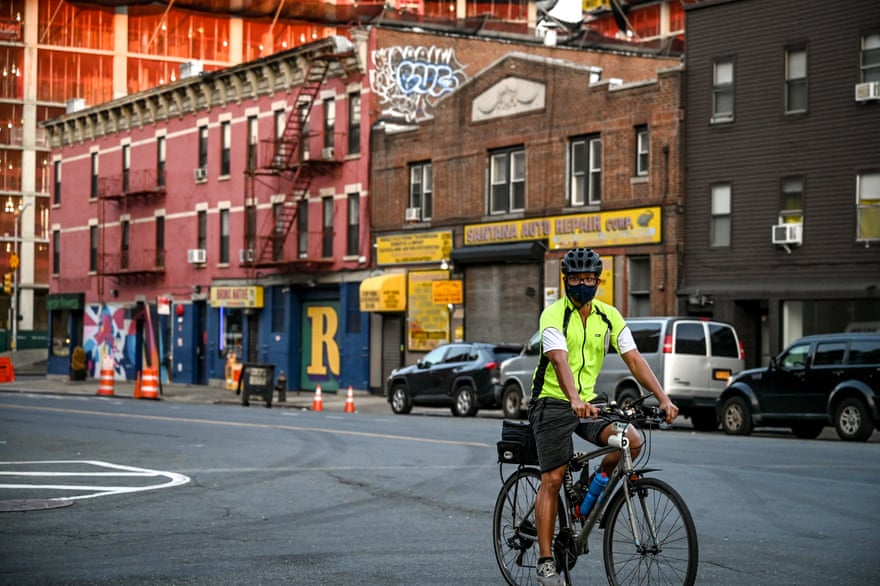 A volunteer for the heat mapping project rides through Mott Haven.

But many low-income residents are not able to afford an air conditioner, which is an increasing necessity with rising temperatures.

“In the Bronx, most people don’t have that economic level to have air conditioners,” said Barber. “And if they do have them they can’t use them because they can’t afford the bill.”

Opening up libraries, schools and community spaces with air conditioning as cooling centers is part of a heat management strategy in many cities. But in the week-long heatwave that hit New York City in July, half of all cooling centers were shut on Saturdays, and 83% were closed on Sundays – despite the heat emergency lasting through the weekend.

“I wanted to see how we can do something about this detrimental heat here in the Bronx,” said Octavia Jones, a program coordinator at a local ministry. Her 15-year-old daughter joined her on the heat-mapping expedition and helped her navigate as they drove through the city. Jones lives right off the Cross Bronx Expressway and her eight-year-old son has asthma.

Jones lives in Mott Haven, a mixed residential and industrial area close to the waterfront in south Bronx. The poverty rate in Mott Haven was nearly 40% in 2019, compared with 16% citywide and 26% in the Bronx overall. It is surrounded by elevated highways, and a fleet of trucks passing in and out of the 500,000 sq ft (46,451 sq metres) headquarters and distribution hub of FreshDirect, a grocery delivery service that opened in 2018 and was met with opposition from locals.

“We live in the traffic of it all and we try to stay inside on those very hot days,” Jones said, adding that in avoiding the outside, she relies on her window air conditioning unit. “They are effective and they are necessary,” Jones said. Her electric bill in the summer does go up by an average of $150.

Residents of the south Bronx peninsula don’t have access to the water due to the commercial developments, warehouses and other industrial buildings concentrated along the waterfront. This lack of access to green and blue spaces becomes an even bigger problem in the summer when people seek to cool off from the heat. 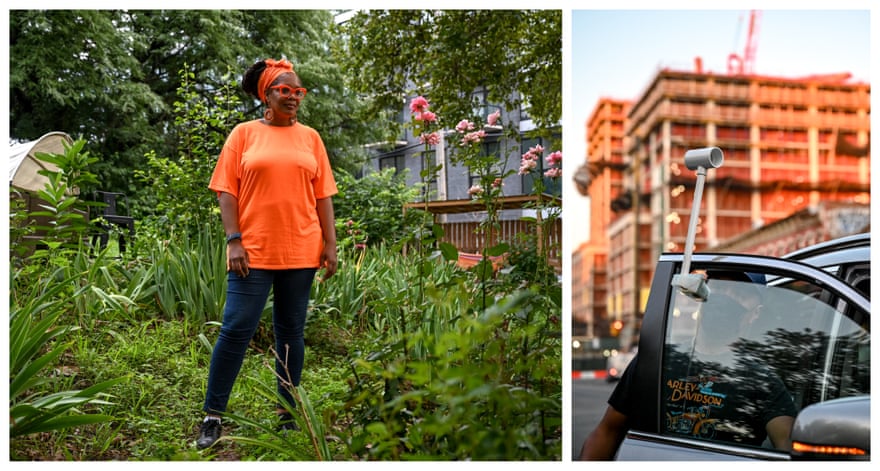 Left, Barber hopes the data from the heat mapping project will bring about action. Right, Francisco Casarrubias volunteers to collect information on heat inequality through a sensor.

Planting more trees can help mitigate hotter temperatures, and South Bronx Unite has recently used this data to advocate for more green space at a roundtable for extreme heat preparation. But activists urge local and federal officials to address the structural inequities, and one such move is capping the Cross Bronx Expressway, covering portions of the highway with green space and reconnecting neighborhoods separated by the structure. Barber hopes that the heat-mapping findings will bring about concrete action that for so long, has not been invested into the south Bronx.

“Because we as a community have had to face so much neglect and rejection by elected officials, we had to come together and fight for the things that we feel are necessary,” Barber said. “Data will be the backing.”

In the more than 10 years that she’s been advocating for her native borough, Barber observed that a lot of the fight can be internal. “There’s a level of that despair and hopelessness, like, ‘What’s the point?’” she said. “Having citizen scientists be a part of this, learn about what’s happening in the community is always such a positive thing.”