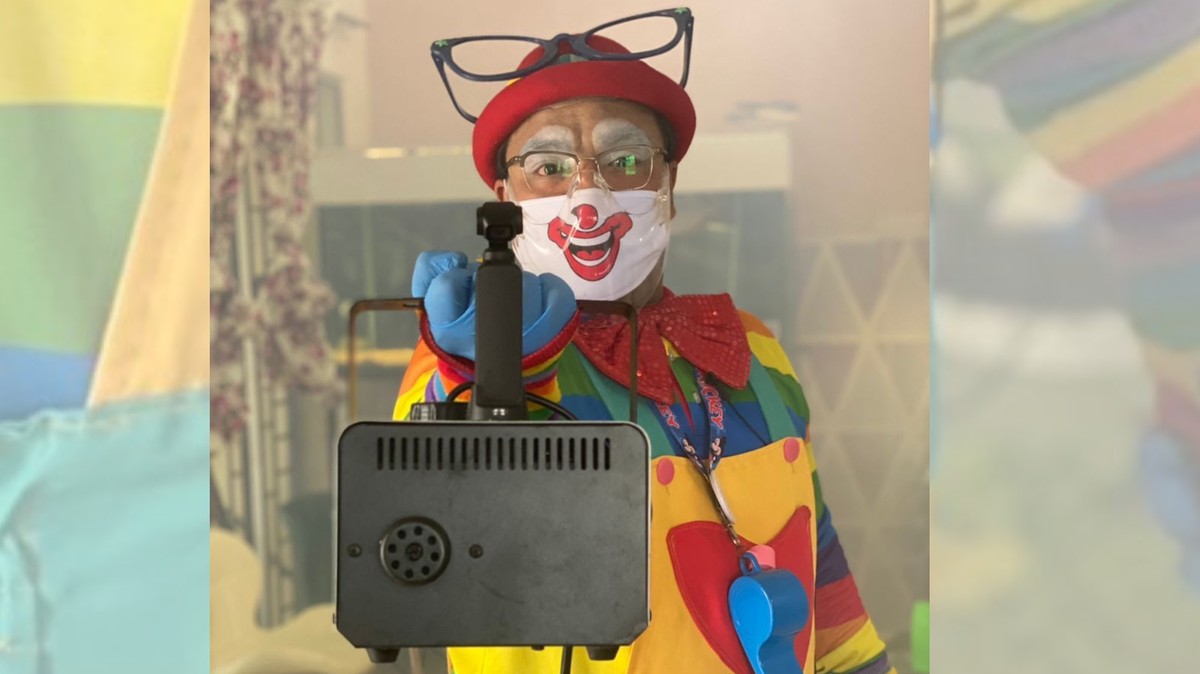 Known locally as Piweet the “fogging clown,” a professional entertainer in Malaysia has found a niche fogging houses during the COVID-19 pandemic. Photo: Courtesy of Shaharul Hisam Baharudin

In what is now basically a daily routine, Shaharul Hisam Baharudin puts on his rainbow-striped shirt and vibrant overalls, and dabs face paint over his eyebrows in front of a mirror. The finishing touch of the get-up is a face mask designed with a bright red nose and large grin, the last bit of detail before he transforms into Piweet the clown.

But he’s not heading to a toddler’s birthday party or a festival; he’s on his way to fog people’s houses with disinfectant.

Before the pandemic, 43-year-old Shaharul was a full-time DJ, emcee, and party clown based in Taiping, Malaysia. But since the country implemented movement control order restrictions in May followed by a lockdown (and a ban on social gatherings like weddings and birthday parties), he saw his gigs grind to a complete halt.

In August, after three painful months of sitting in uncertainty, he whipped out his old fog machine (previously used to create smoke at events he hosted), poured in some disinfectant liquid, and started fogging houses—all while in character as Piweet the clown.

One reason he pivoted to his new role as the “fogging clown,” Shaharul told VICE, is because he’s an entertainer at heart. He said he wanted to perform for kids who were missing out on socializing with other kids.

“So I said, ‘Why not have a family invite an entertainer, have him come to their house, and entertain their kid?’” he said.

As Piweet the clown, Shaharul is now on a mission to bring some joy to kids cooped up at home, while disinfecting their houses. His other reason for taking on a clown-clad fogging stint is more pragmatic—he wanted to set himself apart from other disinfecting services, and offering clownish entertainment along with residential sanitizing is as unique as it can get. He now fogs 10 to 15 houses with disinfectant a day and has a weekly disinfecting schedule at a local mall.

According to Shaharul, the fog makes some children feel uncomfortable. So before officially getting down to disinfecting a house, he usually entertains the children as Piweet and explains that he’s there to kill germs lurking in their home. He also enchants them with magic tricks and balloon sculptures. Then, he carries his handheld fog machine and disinfects the house systemically, from the back to the front. He also sometimes disinfects people’s cars, upon their request.

“Before I leave, they ask for a selfie,” Shaharul said. “So we have a connection.”

While the effectiveness of the practice remains inconclusive, fogging homes and public spaces with disinfectant is common in Malaysia, with health ministry-approved disinfectants available for public purchase—Shaharul said he uses one of these. Besides wearing rubber gloves and keeping a distance from his clients, he said he also first makes sure that no one in the household is positive for COVID-19 or in quarantine before accepting a job.

Shaharul’s unique combination of cleaning and clowning has made him somewhat of a local celebrity, appearing on the news and experiencing a boom in business.

Even with the increased demand, Shaharul said he plans to keep his services affordable. He charges about 50 Malaysian ringgit ($12) for a fogging visit in clown costume, and less if he isn’t in character as Piweet.

Since going viral, Shaharul has also started sanitizing mosques for free as a way to give back to his community.

Even when he’s not working, he still tries to wrestle a chuckle out of his daily interactions, a habit he picked up from his late father whom he describes as a “joker.”

“I’m happy-go-lucky,” he said of his lifelong interest in bringing laughter. “I like to give happiness because I want to get happiness.”

Shaharul was first inspired to pursue a clowning career in 2012, when he was an emcee at a public event alongside a professional clown. Over the course of the day, he saw how the clown brought wide grins to people and realized that he wanted to do the same.

“I looked at the clown and I said, ‘I feel like I want to be a clown,” he recalled. Before he knew it, he was learning how to make balloon sculptures at home and reaching out to his clown friends for tips.

Having to fog houses while dressed in a clown costume doesn’t make the job much harder, Shaharul said. In fact, it actually makes it more enjoyable.

Whenever he’s in his clown get-up, his “energy and aura is different than normal,” he said. “I don’t know why… I wear my clown costume [and] my energy totally changes.”

He’s not sure how long his stint as the fogging clown will last, but he sure is making the most out of Piweet, his beloved alter ego.