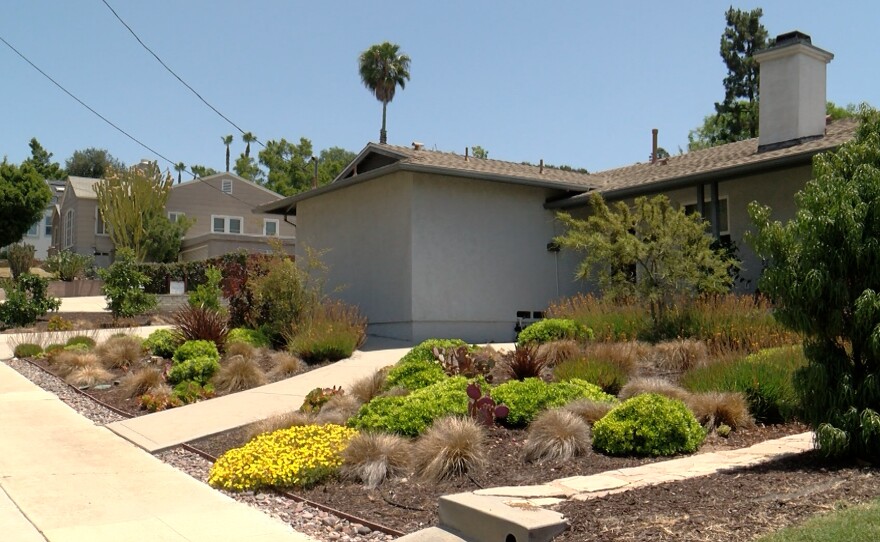 A former fountain with plants in it is shown at the Water Conservation Garden at Cuyamaca College on June 9, 2022.

They’ve been part of the American Dream, Southern California style for decades. But verdant lawns are disappearing more and more thanks to shrinking water supplies.

The Golden State is now in its third year of drought. A study published by the journal Nature Climate Change in February found this is the worst drought in what is now the western United States in 1,200 years.

So, water conservation is vital, but that doesn’t necessarily mean getting rid of lawns.

“We can reduce irrigation use on almost any property by 50 to 70% with proper irrigation tools,” said Scott Lawn, the owner of Greenway Irrigation Lawn and Landscape. (And yes, that’s his real name.)

A house is shown in La Mesa where a lawn has been replaced by drought resistant landscaping on June 9, 2022.

Lawn said you could use a lot less water and keep grass green by using MPR stream rotors, a type of sprinkler made by MPR Supplies, and drip irrigation.

But more and more, he said, people are opting for either artificial turf and drought-resistant plants along with hardscape, which consists mainly of decorative rocks and pavers.

Modern turf is a long way from the AstroTurf of yesteryear.

“The fibers now, they’ve come up with all sorts of ways to swirl the fibers, to twist the fibers and to give it some rigidity and that cushioning that you’re noticing,” Lawn said. “And it looks natural.”

But for those looking to move away from the lawn look, there is an amazing array of colorful plants that use very little water.

An impressive array can be found in the nearly 5-acre Water Conservation Garden at Cuyamaca College. 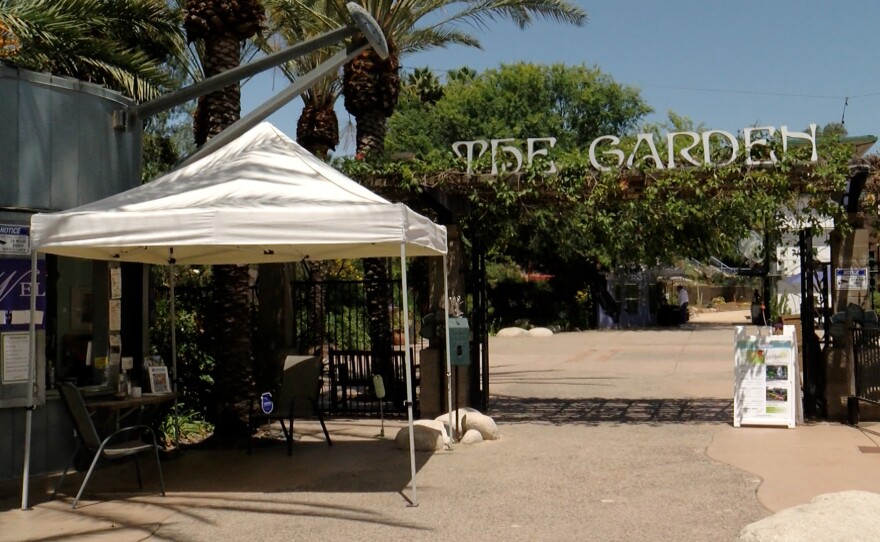 The entrance to the Water Conservation Garden at Cuyamaca College is shown on June 9, 2022.

“San Diegans have done a great part in continuing water use efficiency. But there’s always more we can do,” said Efren Lopez, a water resources specialist with the San Diego County Water Authority.

Lopez said there are incentives for people to get more water-wise.

When it comes to the drought, the Water Authority said San Diego County is in a better place than most of the state. Years of investment in localizing our water supply, with projects such as Carlsbad’s desalination plant, are paying off.

The region has also invested in expanding how much water can be stored locally. And pure water projects that convert wastewater into potable water are either being constructed or online. The first phase of San Diego’s massive project is expected to come online next year and will provide 15 million gallons of purified water daily, and the second phase is set to be complete in 2035. Once complete, the system is slated to provide 83 million gallons of water a day, about a third of the city’s future water supply. 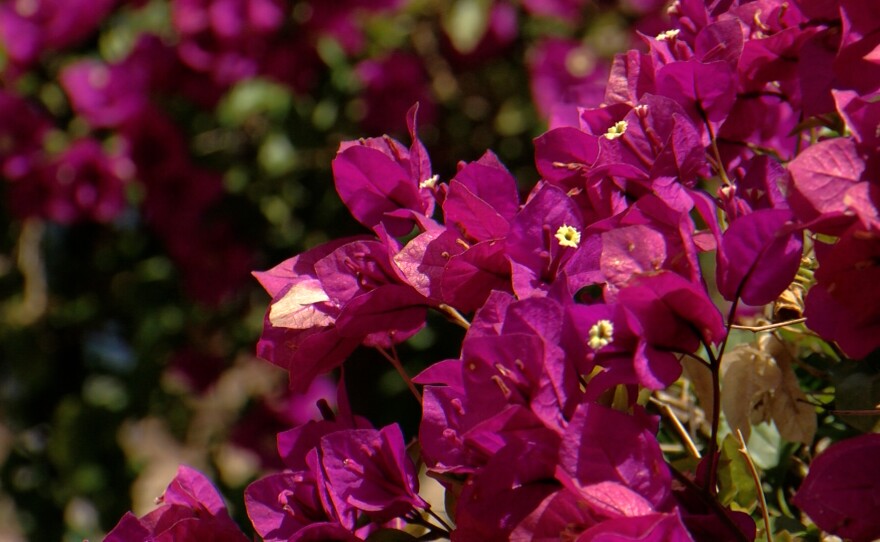 Bougainvillea is shown at the Water Conservation Garden at Cuyamaca College on June 9, 2022.

San Diegans have done a remarkable job in conserving water. Over the past three decades, as the population has grown, Lopez said water use has decreased by about 40%. The Water Authority has said the region’s water’s secure for the next few decades.

The most extensive use of water here happens outdoors. So turning to plants like the ones in the Water Conservation Garden helps a lot. 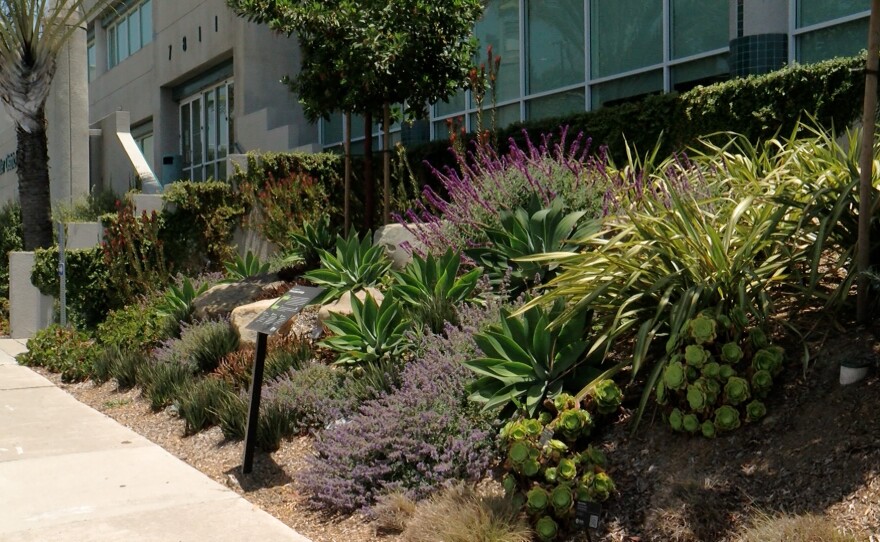 The Mediterranean Garden at the headquarters of the Helix Water District in La Mesa is shown on June 9, 2022.

Not far from the Water Conservation Garden, another place has examples of drought-resistant plantings that are a little more manageable.

The Helix Water District serves 277,000 customers of La Mesa, El Cajon and Lemon Grove and portions of the surrounding unincorporated areas. In recent years the district updated the landscaping of its headquarters to emphasize conservation.

“In 2020, we decided it was time to really showcase what we’ve been encouraging our customers to do,” said Michelle Curtis, the district’s public affairs supervisor. 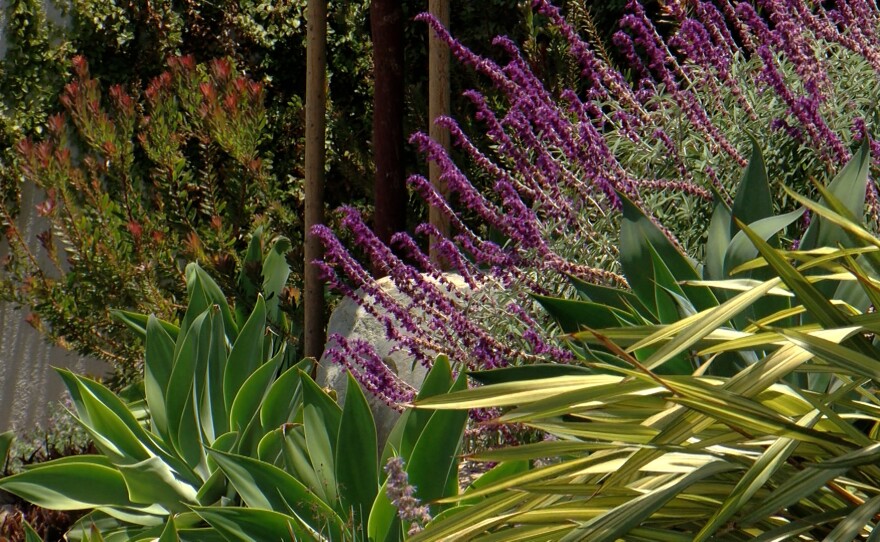 A portion of the Mediterranean Garden at the headquarters of the Helix Water District in La Mesa is shown on June 9, 2022.

The district pulled out the ivy and trees that used to surround its headquarters and installed three demonstration gardens — Mediterranean, desert and native California.

“They tend to have very soft colors, a lot of texture and also a lot of fragrance, so it’s a nice sensory experience,” Curtis said of the district’s Mediterranean garden. On the other side of the building is the desert garden.

“So on this side of our building, we have our desert landscape… more cactus and succulent-based than you saw on the Mediterranean side,” she said. 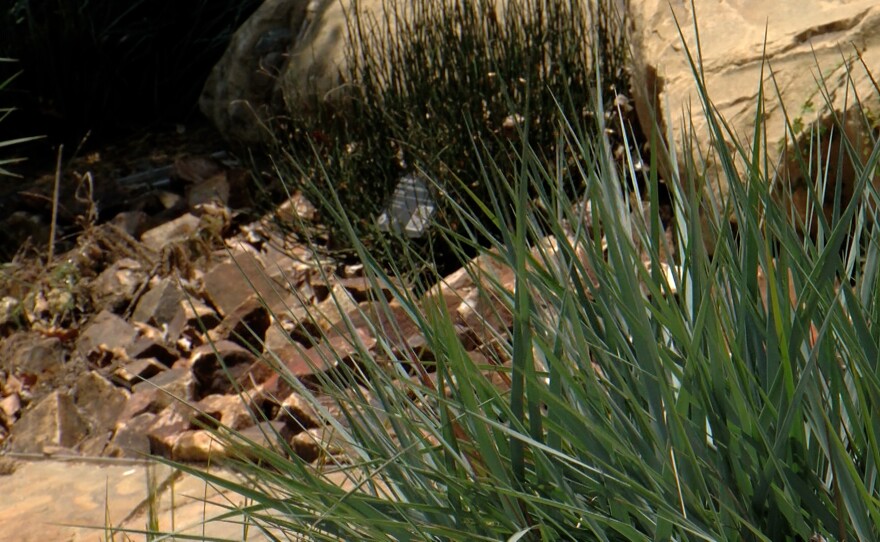 Native grasses are shown at the headquarters of the Helix Water District in La Mesa on June 9, 2022.

On the back side of the building is the California native garden.

“We have some Cleveland sage, we have some different types of flax lilies, but it’s really very textural,” Curtis said, “so if you’re out here, especially if the wind’s blowing, you’ll see all the grasses blowing in the wind, but this is also going to be our lowest water use garden.” 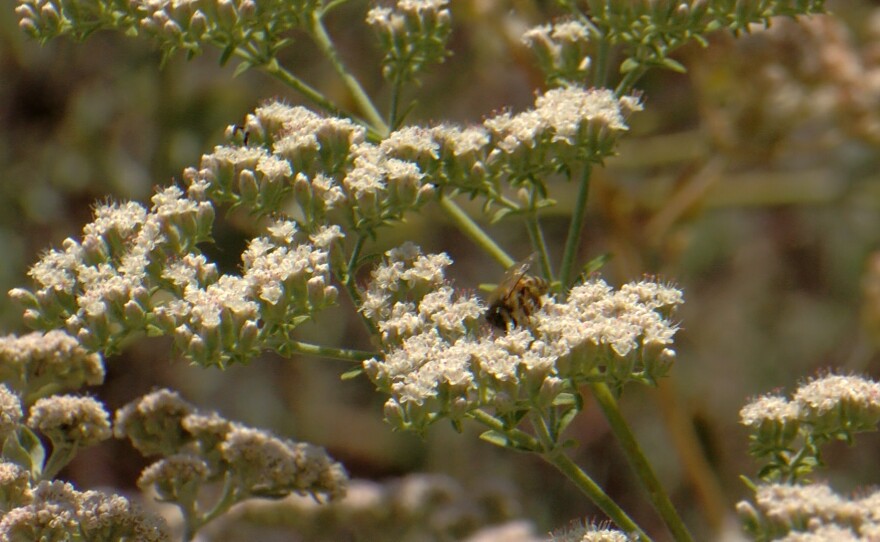 Small white flowers are shown in the California Native Garden at the headquarters of the Helix Water District in La Mesa on June 9, 2022.

It’s the lowest water use garden because these plants were around in California before green lawns and palm trees — plants that developed to survive in an arid climate, plants that carry a message about how we can all adapt when water becomes more precious by the day.