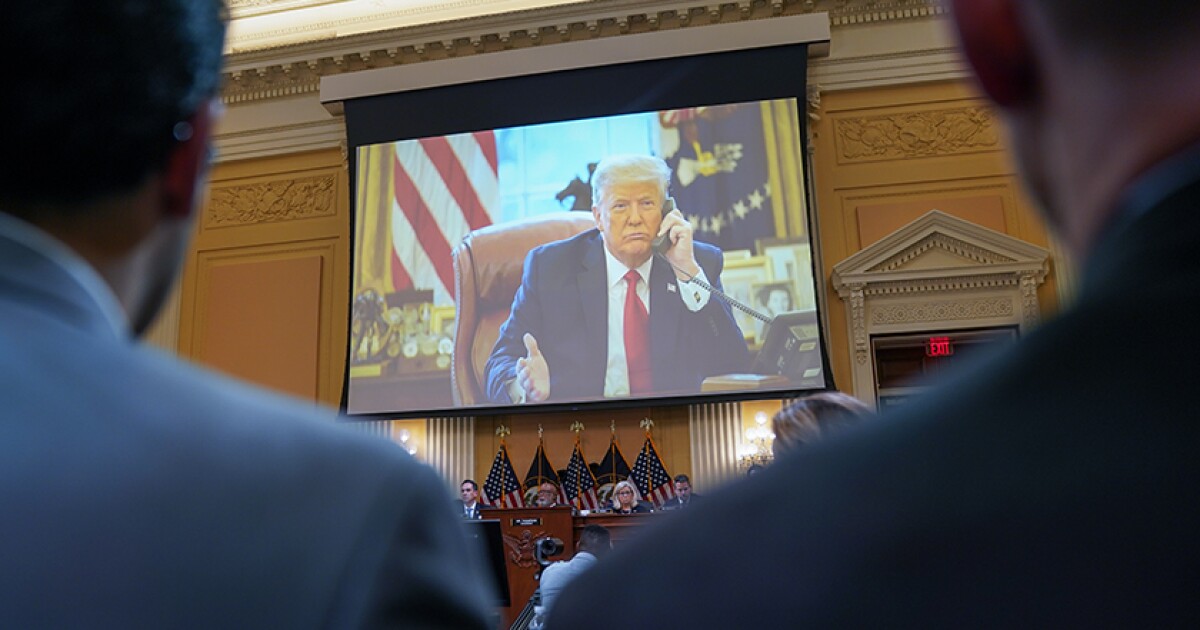 Good morning. I’m Paul Thornton, writing from beautiful Santa Fe, N.M., and it is Saturday, June 18, 2022. Let’s look back at the week in Opinion.

We’ll begin, once again, with the House Jan. 6 committee hearings, but I want to set this up by going all the way back to winter 2017. Right around the time Donald Trump was inaugurated as president, I saw a production of “King Lear” in Pasadena and came away from the Shakespearean tragedy drawing unsettling parallels with the present and worrying about what may lie ahead. For those who don’t know, Shakespeare’s Lear starts as a declining monarch, a narcissist set upon by sycophants and family members who seek the power that he believes he is bequeathing on his terms. Chaos ensues as Lear falls victim to his senility, lack of self-awareness and vulnerability to flattery.

The comparisons to Trump — or at least, how we might have understood Trump before the level of his malevolence became clear — are obvious. And they may be off somewhat, as the depositions and testimonies from this week’s Jan. 6 hearings laid bare.

Sure, the Lear-like detachment from reality was there; Trump’s former Atty. Gen. William Barr made as much clear when he said the former president had been told multiple times that there was no basis to claim that the 2020 election had been stolen from him. Others in the Trump administration and his campaign — all Republicans, mind you — also revealed the straightforwardness and frequency with which the defeated president had been informed that Joe Biden rightfully won the election. To hear the witnesses say it, the lame-duck president had his pick of plentiful reality-based truth-tellers to believe, but he went with the conspiracy-peddling Rudy Giulianis and John Eastmans who also had his ear.

Legally this is important because it shows that while Trump may have actually believed his Big Lie, he chose to ignore the truth of what people around him were saying. This, according to op-ed columnist Harry Litman, gets at the ex-president’s intent and state of mind when he was stoking insurrection, and it could serve as a basis for the Justice Department to criminally investigate Trump.

Problem is, says Litman, Trump’s lying has so cleaved the country into distant camps that putting the former president on trial could make matters worse. Therefore, it is the voting public and not the Justice Department that must repudiate the Big Lie.

This brings me back to King Lear (thanks for bearing with me on that one), who saw himself as in control but was ultimately brought down by hubris and his detachment from reality. Trump shares a similar kind of delusion, but this week’s Jan. 6 testimony and Litman’s analysis reveal a would-be king with a splenetic drive to retain power, fully in control of his willingness to believe a lie. And if the delusion destroys anyone, it’ll be us.

Cynical Republicans want to know: What’s Liz Cheney getting out of this? The congresswoman from Wyoming, where Trump had his largest margin of victory in 2020, is doing something that her fellow Republicans do not understand: acting solely in the best interest of her country at the expense of her career. Nicholas Goldberg writes: “Some politicians risk their careers to act in accordance with their consciences, and should be praised. Others don’t. House Minority Leader Kevin McCarthy (R-Bakersfield) and his followers, for instance, have behaved spinelessly and cynically, falling in line like sheep to avoid antagonizing Trump.” L.A. Times

Kids are watching, and they need help understanding Jan. 6. This could help. One reader, former public radio journalist Kitty Felde, responded to last week’s newsletter by sending a link to a podcast episode she created explaining the insurrection to young people in the form of a children’s mystery. She wrote to me: “These days, instead of explaining how government works to public radio listeners, I explain it to children through a series of mystery novels and a podcast. After January 6, I knew I had to create something to help parents and teachers talk to their kids about that day.” The Fina Mendoza Mysteries

How he learned to stop worrying and start loving the Jan. 6 committee. Those expecting a criminal conviction of Trump resulting from information revealed by the Jan. 6 committee, or at least a cathartic, movie-like demonstration of the former president’s guilt, are going to be disappointed. But, says Jonah Goldberg, the hearings are serving an important purpose: “Here is what the hearings are well on their way to do: Create a safe space for elected Republicans, activists and conservative media figures to state openly what many already knew — the election wasn’t stolen, Trump lied about it being stolen and that he bilked hundreds of millions of dollars from the poor marks he conned. Sadly, very few of them will say it so bluntly. But you can already see the migration out of crazyland.” L.A. Times

Enjoying this newsletter? Consider subscribing to the Los Angeles Times

Your support helps us deliver the news that matters most. Become a subscriber.

Don’t fear L.A.’s ban on gas stoves. Electric appliances are the future. Los Angeles’ ban on gas appliances in most new construction is an important weapon in the city’s fight against climate change. Not only that, but it also pushes us to use technology that’s simply better than what fossil fuels like natural gas can power. Says The Times editorial board: “Electric induction stoves, which use magnets to heat food, aren’t just more energy efficient than the electric coil or radiant cooktops. They also can boil water faster and offer precise temperature control, making for an improvement on most basic cooking tasks, while reducing the climate and health risks of cooking with gas and improving indoor air quality. Gas stoves release health-damaging air pollutants including nitrogen dioxide that can worsen respiratory diseases such as asthma and can reach levels inside homes that, if they occurred outdoors, would violate federal health standards. It’s not too different from electric vehicles, which offer zippy torque, quiet acceleration and other technological improvements that come on top of their benefits to the planet.” L.A. Times

I like trees, so I wrote about meeting the oldest known tree in the world on the occasion of its impending dethroning as the world’s most senior living organism. Last October, on my 40th birthday, I set out to find the tree known as Methuselah, a nearly 5,000-year-old Great Basic bristlecone pine eking out a meager existence on a frigid mountainside near the California-Nevada border. I’m pretty sure I found Methuselah, which like other ancient bristlecone pines and majestic California sequoias and redwoods faces an uncertain future: “Trees like Methuselah survive for millennia largely because of their remoteness. Their decline would be the ultimate indicator of how severely humanity has altered nature. You might not be able to see Methuselah with your own eyes — or at least know when you’re looking at it — but that tree’s ability to survive should matter to you.” L.A. Times