Anna Robertson was well into a successful career as an Emmy-award winning broadcast news professional, following an arc that has included working with legendary journalist Diane Sawyer, covering major stories of the 2000s, including 9/11, the Iraq War and Hurricane Katrina, and taking on senior production duties at “Good Morning America.”

But a series of events and recognitions inspired, or perhaps compelled, her to perform a major life pivot, moving from the West Coast to Park City, Utah, and revamping her career goals to focus on one of the biggest issues facing the world today — climate change.

What drove Robertson to reevaluate and recalibrate? Raging California wildfires, including one that forced Robertson and her family to evacuate their Los Angeles home in the middle of the night, along with air quality issues that sometimes kept her children home from school and a growing feeling that useful and diverse information about climactic change just wasn’t making it onto the radars of a wide audience.

“The first lightbulb moment I had came from three things,” Robertson said. “Working in the local news space and seeing the impact of the extreme weather, being evacuated, and the third thing, I got curious and angry about how much innovation was happening that people didn’t really know about.

“I just sort of asked why isn’t there a more mainstream source of climate information written in plain English?”

With the seeds of a new idea planted, and newly relocated to Park City, Robertson learned that her friend Dave Finocchio, co-founder of sports news site Bleacher Report, shared her sentiment about a missing component when it came to climate change stories and innovations. It was an idea not altogether removed from the inspiration behind Bleacher Report, which launched in 2005 and found success on the premise that a lot of information and ideas in the sports realm were simply being missed by other outlets.

The self-described “climate mom” was now on a mission to fight pollution and cool down the planet and, along with co-founder Finocchio, launched The Cool Down website earlier this year.

Robertson described The Cool Down as the “first mainstream climate brand” that aims to make the issues easier to engage with and understand and “connect people with information and a more hopeful future.”

“The Cool Down is a climate content hub, and accordingly our content is a mix of original content and curated content amplified by our editorial team,” Robertson said. “This includes storytelling on climate topics, where our team profiles entrepreneurs and innovations, explains complex topics in accessible language, and provides actionable resources and tips for how people can live and shop healthier and more sustainably.”

A recent visit to the site revealed stories about how scientists are experimenting with okra to clean polluted water, where to buy sustainable holiday greeting cards and a feature on offshore wind energy.

Anna Robertson, co-founder of The Cool Down, poses for a photo with her children, Sibella Wildman, 7, and Jackson Wildman, 8, at their home in Park City on Thursday, Nov. 3, 2022. The Cool Down is described by its founders as the first mainstream climate brand on a mission to connect a wide-ranging audience to climate topics and conversations.

While cosmetics and personal care products wouldn’t typically incite a conversation about climate change, one Cool Down contributor has made “green beauty” her raison d’etre and is working to raise awareness, and change habits, when it comes to the nexus of the environment and personal care.

Celebrity makeup artist Katey Denno has created looks for numerous stars, including Gillian Anderson, Mindy Kaling, Amanda Seyfried and Margaret Qualley, but she’s dedicated her career to achieving “the look” with clean beauty products made with ingredients and packaging that are better for her clients and for the planet.

Denno traveled an unlikely path to makeup artistry, doing social work for years at a Bronx, New York, hospital where she first witnessed the true transformative power of makeup — she taught domestic violence survivors how to use concealer to cover bruises so they could go back to work without scrutiny from co-workers.

Around 15 years ago, a makeup professional spotted a doodle Denno had done on a napkin and invited her to assist on an upcoming photo shoot. From there, Denno was hooked.

Early into her new career, Denno said she was helping a friend who was undergoing chemotherapy find the purest skin products she could use amid her fight against cancer. Denno said she realized then how few resources were available when it came to finding cosmetics and care products that were made from healthy and responsibly sourced ingredients.

“At that time, 13 years ago, nobody was really talking about it much,” Denno said. “It took a lot of digging and trying to track down as much information as I could find. There were very few guides and little to no mentorship.”

So, Denno took it on herself to become a guide and resource when it comes to planet-friendly products.

“It was a natural progression,” Denno said. “I’ve always been interested in sustainability and working in beauty and seeing all the mad waste … something had to change.”

Denno has not only become an expert on identifying products that feature pure and healthy ingredients, she’s also working to raise awareness about how those products are packaged.

On her website, Denno said for those looking to build a less toxic and more eco-friendly lifestyle “it’s about taking small, thoughtful steps and deciding what feels right as you go along.”

And Robertson and Finocchio are continuing to take their own thoughtful steps with building content, and conversations, with The Cool Down site.

Robertson said there’s a “tremendous treasure trove of content and ideas” that fit within Cool Down’s mission to mainstream climate topics, and the site is quickly building its offerings of content and products as well as its audience. She also noted The Cool Down wants to help break down siloed, and sometimes divisive, climate conversations by including a wide range of ideas and voices within its publishing choices.

“We all want clean air, clean water and a better future for our children,” Robertson said. “Most Americans do understand that climate change is happening. Unfortunately, a lot of people are not talking about it with friends and family. We have a huge opportunity to broaden the conversation on climate topics. And, we’re not going to be able to change anything if we just talk to one group of people.” 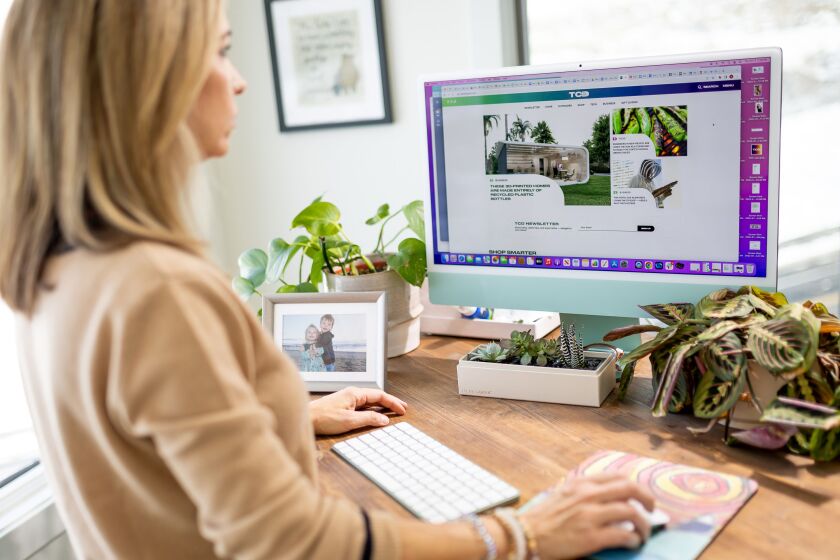 Anna Robertson, co-founder of The Cool Down, shows off the website while posing for a photo at her home in Park City on Thursday, Nov. 3, 2022. The Cool Down is described by its founders as the first mainstream climate brand on a mission to connect a wide-ranging audience to climate topics and conversations.