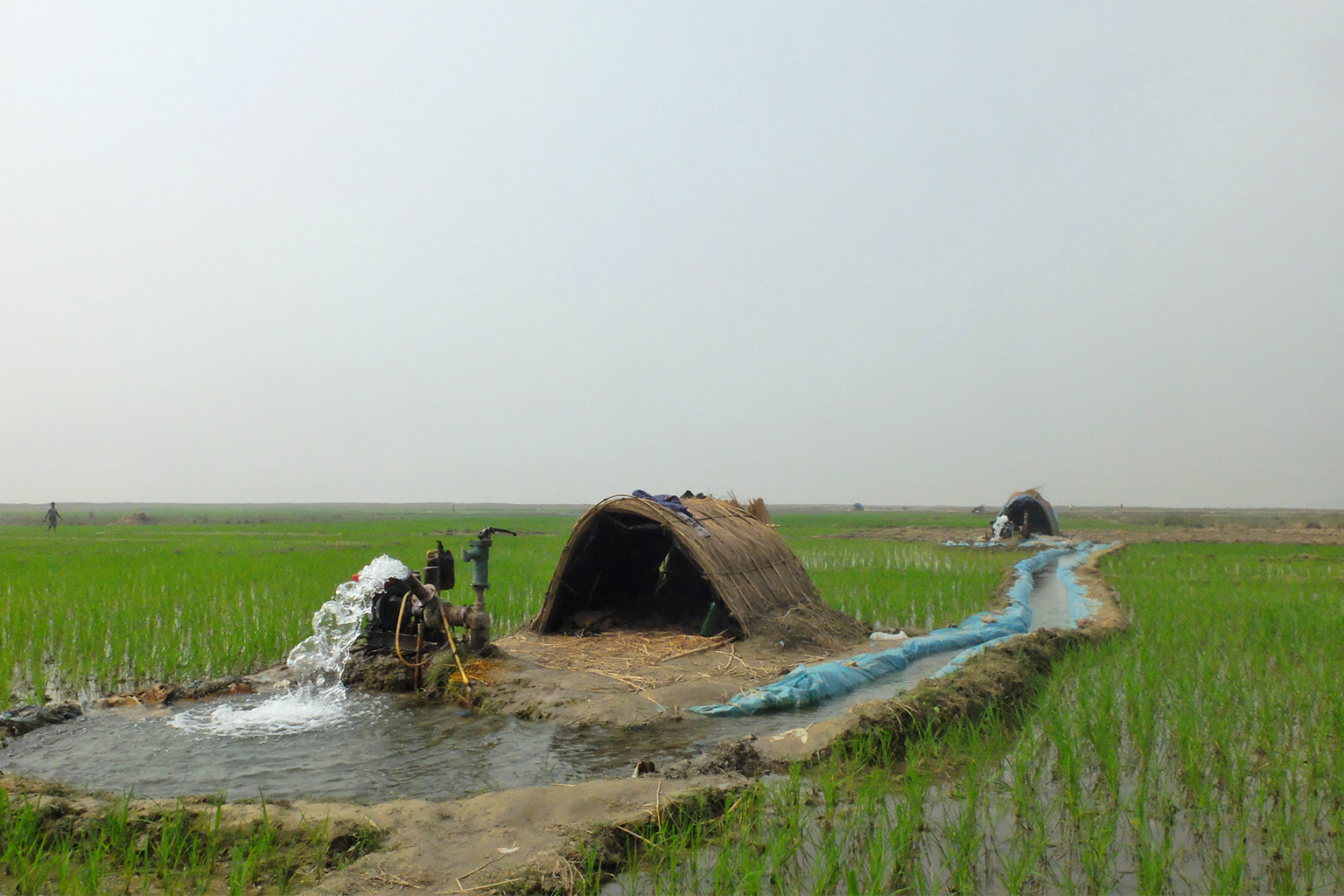 DHAKA — Bangladesh is looking to recharge its aquifers with storm water, reclaimed water, desalinated water and potable water, in an effort to ward off the depletion of this precious resource.

The Bangladesh Water Development Board (BWDB) has finalized a draft national strategy for what it calls managed aquifer recharge (MAR), and submitted it to higher authorities for approval.

Bangladesh ranks sixth in the world for countries with the largest estimated annual groundwater extraction, according to the “U.N. World Water Development Report 2022.” By 2030, groundwater levels in the greater Dhaka area may drop by between 3 and 5.1 meters (9.8 and 16.7 feet) per year — approximately 70% faster than the current rate — according to a study by the Bangladesh Water Partnership (BWP) and supported by the 2030 Water Resource Group (2030 WRG).

Aquifers are vast stores of freshwater held in a permeable rock layer underground, and are usually “recharged,” or refilled, by surface water (typically rainwater) seeping into the ground. In cases where the rate at which water is extracted from the aquifer (usually via wells) exceeds the rate of recharge, managed aquifer recharge can inject water from other sources that typically wouldn’t reach the permeable rock. This includes storm water, reclaimed water, desalinated water and potable water, allowing for subsequent recovery or environmental benefit.

About 98% of Bangladesh’s population relies on groundwater for drinking water. Image courtesy of Abdul Goni.

“MAR can also be used for improving water quality of groundwater and controlling seawater intrusions in coastal aquifers,” said Anwar Zahid, director at the Directorate of Groundwater Hydrology under the BWDB.

“If the draft is approved, it will be placed for broad consultation, prior to the preparation of the final strategy,” he added.

The BWDB has already carried out MAR pilot projects in Dhaka and the Barind Tract, as well as in coastal areas, to improve the quantity and quality of groundwater, respectively.

The extensive use of groundwater in Bangladesh began after the country’s independence in 1971, driven by a shortage of safe drinking water. At present, about 98% of the population relies on groundwater for drinking water, while about 77% of irrigation needs are also met by groundwater sources.

The country withdraws an estimated 32 cubic kilometers (7.7 cubic miles) of groundwater annually, 90% of which is used for irrigation and the rest for domestic and industrial purposes, according to a joint study by the Directorate of Groundwater Hydrology and the World Bank.

“The water level in several parts of the capital Dhaka has now dropped 60-75 meters [200-245 ft] below the ground surface,” Zahid said.

According to the draft strategy, MAR will increase the availability of freshwater for drinking, agriculture, industry, and environmental protection. Along with Dhaka and the Barind Tract, the BWDB has also identified the Gazipur region and coastal areas as those facing major groundwater stress.

Replenishing the aquifers in Dhaka, Gazipur and the coastal areas can be done through rainwater harvesting, the plan says, while catchment management techniques will be more prominent in the higher Barind and Hill tracts.

“In urban areas, rooftop rainwater harvesting will contribute to reducing flooding and waterlogging,” the draft says.

About 77% of Bangladesh’s irrigation needs are met by groundwater sources. Image by Abu Siddique/Mongabay.

Outside of agriculture, a key consumer of water in Bangladesh is the country’s garment industry. Ready-made garments account for more than 80% of Bangladesh’s exports by value, and most of the 3,862 factories that produce them are concentrated in Dhaka and the surrounding districts of Gazipur and Narayanganj, as well as Chattogram, according to Mapped in Bangladesh (MiB), a four-year research initiative of the BRAC University.

A major part of the industry is the group of some 800 washing, dyeing and finishing factories, known in the trade parlance as WDF, which consume as much as 300 liters of water to produce 1 kilogram of fabric (about 36 gallons a pound) — six times more water than the prescribed international best practice.

The BWP and 2030 WRG study warns that by 2030, the upper aquifer of the greater Dhaka area may run out of water, especially in the dry season.

“This will likely affect the industrial zones … leading to widespread land subsidence and severe shortfall in drinking water supply from groundwater resources,” the study says. 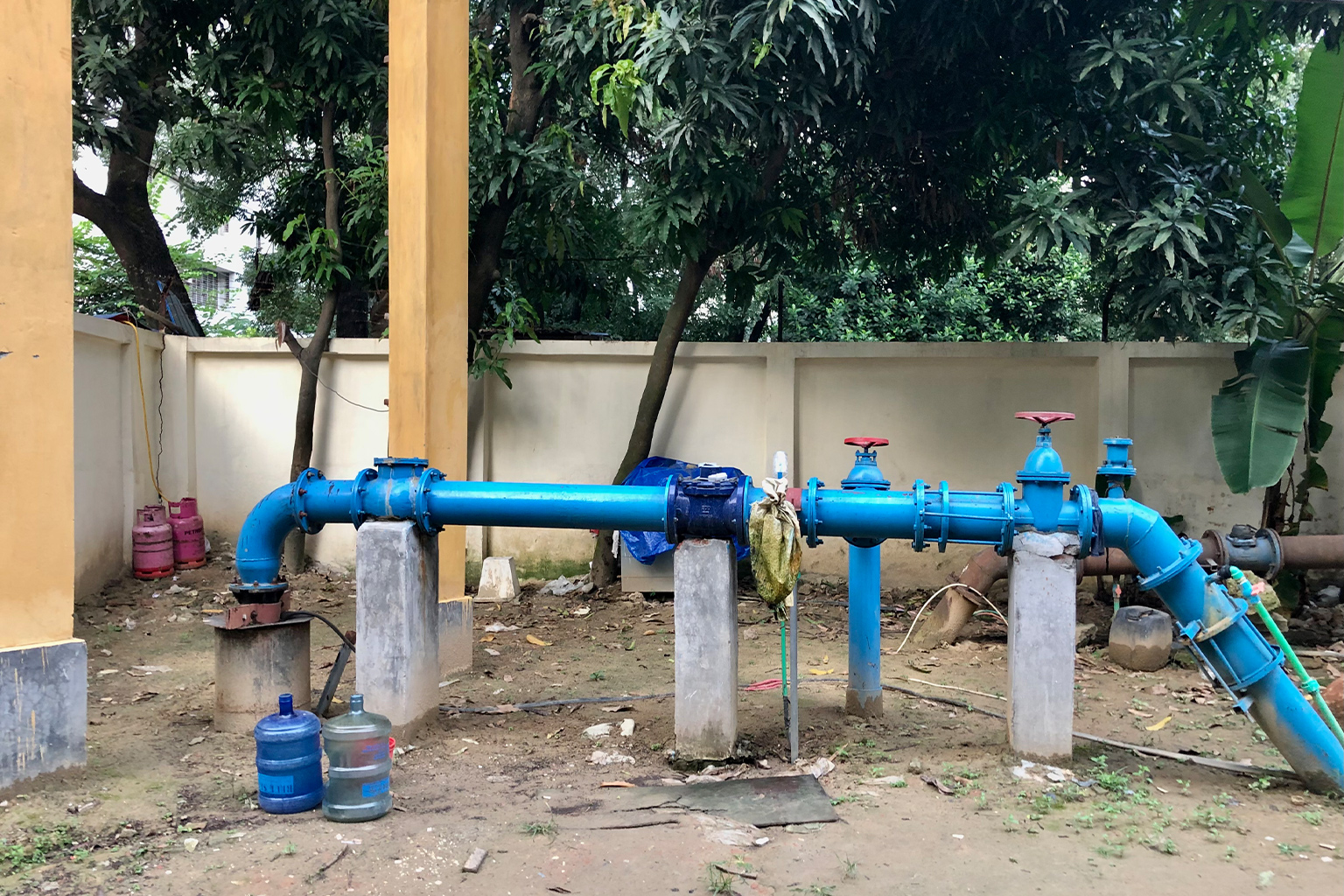 A groundwater extraction system in Dhaka. Image by Abu Siddique/Mongabay.

As of 2016, more than 18 million people lived in what constitutes the greater Dhaka area, while city itself had a population of an estimated 11 million, with a growth rate about 3.6% annually, according to the study. It projected that by 2021, the Dhaka’s population would have reached 21.5 million, and 27.4 million by 2030.

“This will likely have a substantial impact on the access to groundwater for industries. This is expected to also cause irreversible environmental consequences,” it adds.

In Dhaka, the water table is falling by 2-3 m (6.6-9.8 ft) per year, which is alarming, says Md. Ataur Rahman, a professor of water resources engineering at the Bangladesh University of Engineering and Technology (BUET).

“If the current rate of groundwater abstraction continues, the reserved water may run out permanently. In that situation, getting pure water will be more difficult and costlier for city dwellers,” he said.

Experts suggest the government not allow any more new industries in the greater Dhaka area and shift the existing ones to the riverside so that they can use surface water for industrial use. 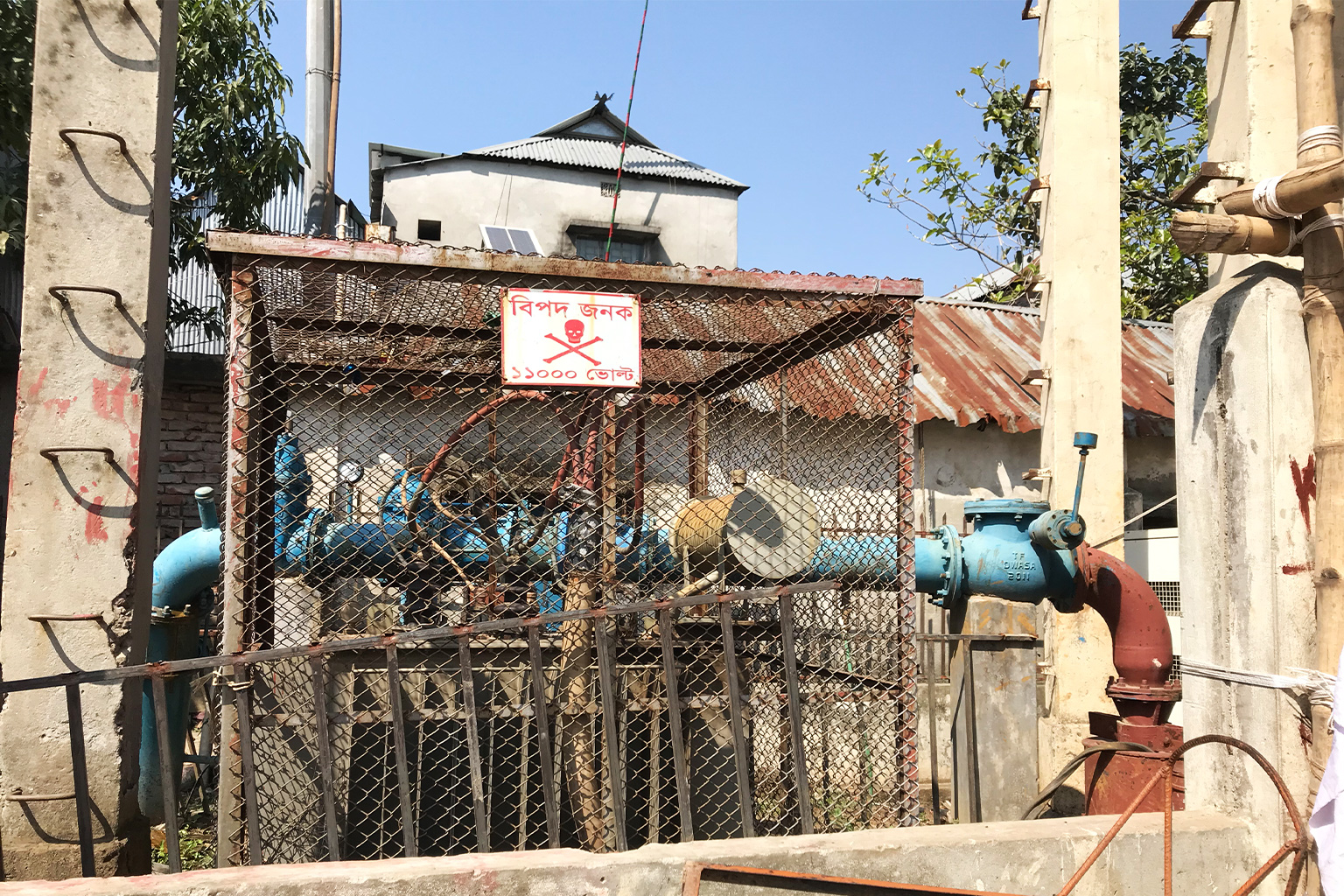 Outside of agriculture, a key consumer of water in Bangladesh is the country’s garment industry. Image by Abu Siddique/Mongabay.

The problem of unusable water

Even though four of South Asia’s largest rivers run through Bangladesh, the country struggles to provide sufficient drinking water for its inhabitants, in large part because of pollution.

A recent study shows the quality of water in many parts of Bangladesh has deteriorated, leaving a significant part of the population at potential threat of water pollution. The study looked at both conventional pollutants (heavy metals, pesticides, fecal pollution) and emerging contaminants.

“Concentration of heavy metals is higher in the water bodies close to the industrial zones,” said lead author Shafi M. Tareq, a professor of environmental science at Jahangirnagar University.

“These heavy metals concentrations in both ground and surface waters of Bangladesh often exceed the maximum permissible limit recommended by the WHO for drinking water,” he added.

The study also found fecal coliform present in water almost all over the country, along with various pesticides and, more recently, emerging contaminants such as antibiotic residue, fluorescence whitening agent and microplastics.

“Before the industries arrived, people mostly used pond water for cooking and domestic use,” said Sharmin Akter, a resident of the Savar area in Dhaka. “For drinking water, we used to rely on tube wells, but nowadays none of these sources work as pollution is very high and the water level has dropped drastically.” 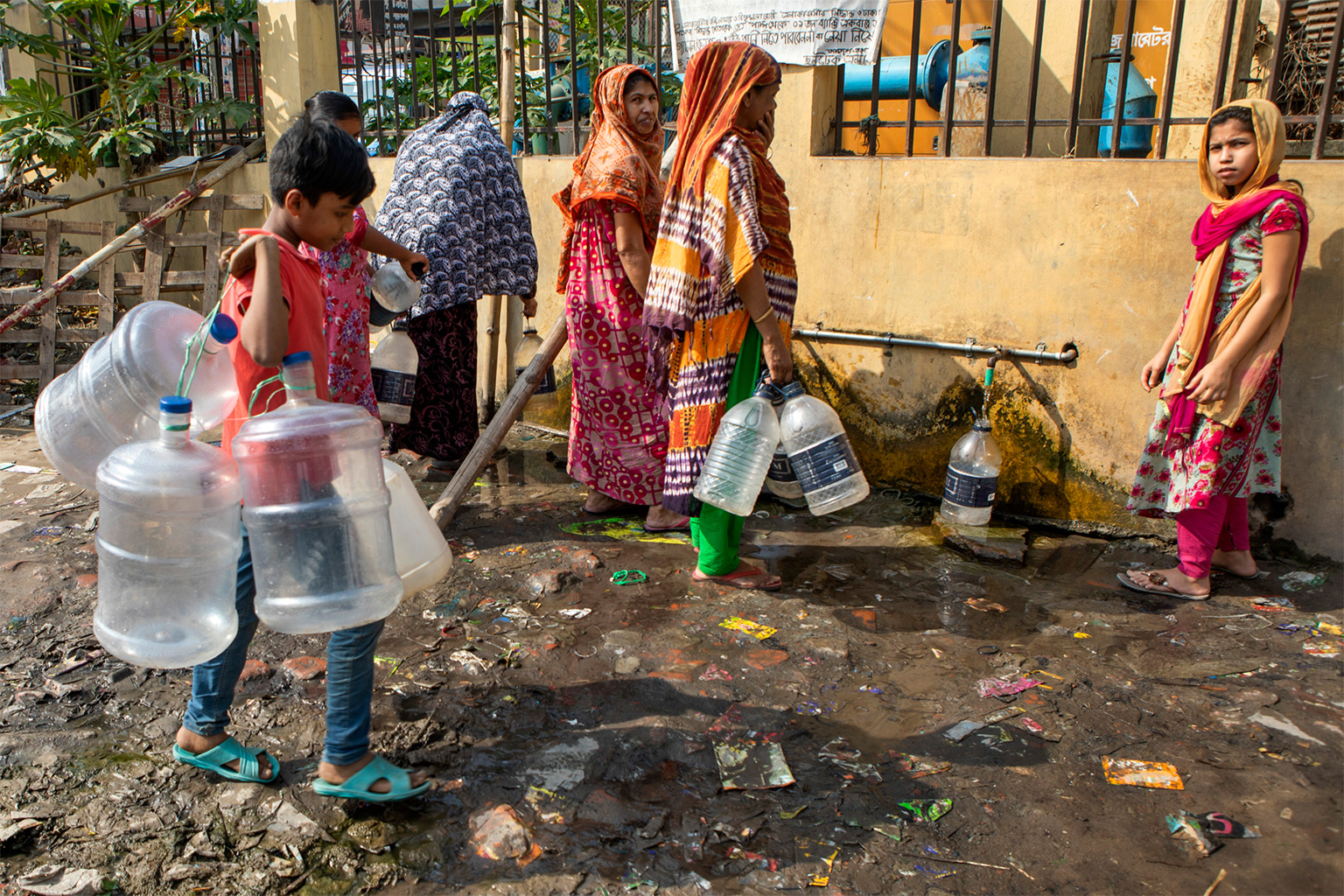 People line up to collect groundwater from a community tap. Image courtesy of Abdul Goni.

The Bangladesh government at one point planned to supply purified water to Dhaka residents by treating the water from the surrounding rivers.

“The waters from Buriganga, Shitalakkha, Turag and Balu rivers are extremely polluted; and they do not carry sufficient water in the dry season,” said Rahman from BUET. “Now, the government is planning to bring water from Padma and Meghna rivers, which will involve extra cost, effort and energy.”

The Jahangirnagar University study identified overgrowth of population, industrialization, rapid urbanization, improper sanitation, and the use of agrochemicals as being responsible for the deteriorated quality of water in Bangladesh. It also recommended formulating and implementing strict laws on water quality in the country.

“The government should take initiatives to educate people, using social or national campaigns, so that people can easily understand what is good and bad for them. At the same time, we need to develop a baseline database on the issue for further scientific study,” he said. “Most of the current data in both government and private levels are project-based.”