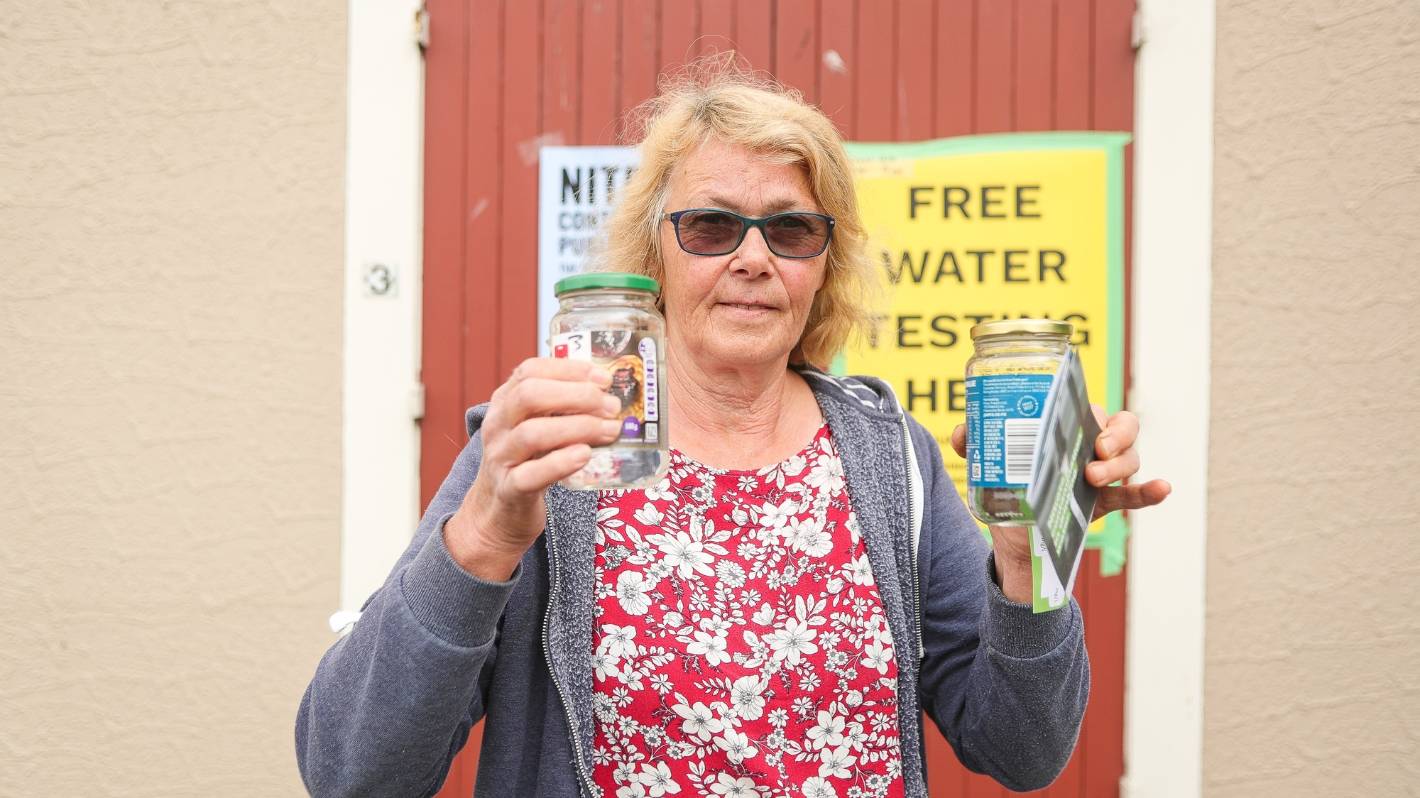 Emergency drinking water supplies have been in place for the Lower Waihao and Waikakahi East water schemes in since nitrate levels exceeded the national drinking water standards in August.

Greenpeace senior campaigner Steve Abel said the organisation had processed 59 samples on Tuesday, with 61% testing over 8mg/l of nitrates.

The results pointed to the “highest levels of nitrates in a reticulated supply for a township” he had seen during the more than 1500 tests they had conducted around the country.

Abel said the highest nitrate levels they generally see are from private bores, rather than from a registered scheme supplying hundreds of users.

People had been “shocked and angered” by the results of the testing, he said.

“It’s not acceptable. Everyone agrees with the principle that everyone should have access to safe drinking water, and there’s no contention about what is causing the problem in terms of the system-wide increase in nitrogen inputs from dairying, including irrigation.”

The Maximum Acceptable Value (MAV) of nitrates under the New Zealand Drinking Water Standards is 11.3 milligrams per litre of nitrate-nitrogen (or 50mg/l of nitrate), but emerging research points to serious health impacts connected to much lower levels.

Carolyn Klein was worried to learn of high levels of nitrate in the drinking water samples she brought for testing.

A 33-year Danish-led study of 2.7 million people found an increased cancer risk above one milligram of nitrate nitrogen, and one American study of 1.4 million births showed a 47% increase in the risk of preterm birth above five milligrams. The New Zealand College of Midwives recommends pregnant people limit risk by avoiding water over 5mg/l.

Abel said the levels seen in samples from both the Glenavy town supply and nearby bore testing were “significantly elevated.”

Around 80% of New Zealand’s tap water has less than 1mg/l of nitrate, but those in rural areas on town groundwater and private bore water are bearing the burden of elevated levels which could be potentially harmful, he said.

In comparison, samples from nearby Waimate tested by environmental scientist Dr Jennifer Pannell on Tuesday were consistently under 0.5 mg/l.

Dr Jennifer Pannell, science advisor to Greenpeace, using a spectrometer to test water samples at the Glenavy Hall on Tuesday.

“Land use change in the last 20 years in the Waimate district has had a marked impact on local people’s basic right of access to safe drinking water.”

Glenavy resident Carolyn Klein brought two water samples to Tuesday’s water testing, one from her home and one from an Air Bnb property she rents out.

She said she was “very worried” about the situation.

“The results I’ve got today are very high. How long have these results been as high as this that I’ve been drinking the water from the tap?”

Klein said she wanted to know who was accountable for testing the water and “letting people out in the public, and in the community, know when things are not right.”

She had been forced to “cart 40 litre containers” to her house and provide fresh drinking water for the Air Bnb since August, she said.

Greenpeace senior campaigner Steve Abel speaking with Helen Bachari while she waits for the results of water testing at the Glenavy Hall on Tuesday.

“I also have to cart water to my house if I’m washing my vegetables, and I’ve got preserving coming, so it’s going to be a lot more work getting water to my sink.”

Klein was disappointed there had not been more communication from the council.

“If something’s not right, come door knocking and leave a note. Let the public and the community know what’s happening out there because we only know from the information that you’re collecting and what you’ve got to give out to us.”

She hoped something could be done to clean up the water supply for herself and future generations, she said.

One of the 59 water samples brought to the Glenavy Hall for testing by Greenpeace science advisor Dr Jennifer Pannell.

“I think it’s important that we start now … and help each other to do the right thing, so my grandchildren can enjoy fresh drinking water and even perhaps go to the river and have a swim and play in the water like I did when I was a child.”

In a statement on Tuesday, ECan southern zone leader Peter Burt said it is “very unlikely” the Oceania dairy factory had contributed to nitrate concentrations at the supply intake.

“The dairy factory is located down gradient from the Lower Waihao rural drinking water supply well. It’s also approximately 8km away from it.”

However, Burt disputed Oceania’s claim that no elevated levels of nitrate had been discovered in their bore water.

The district council has provided tanks of water for scheme users since nitrate levels first breached the maximum allowed in August 2022.

“In the past year, the drinking water standards have been exceeded for nitrate within one monitoring bore on Oceania’s property and one neighbouring bore.”

Burt said neither bore is used for drinking water, and the company had taken action “in line with its consent conditions.”

“No elevated levels of nitrate have been detected in these bores which are in very close proximity to land on which our treated wastewater is dispersed.”

A warning to users of the Glenavy Hall not to drink the water, which has had shown levels of nitrates above national drinking water standards since earlier in the year.

“In the case of exceedances within private bores, it is the company itself that must inform the well owner,” he said.

The elevated calcium levels evident in the analysis done by Otago University researchers could be explained by other factors, Burt said.

“This area is intensively farmed and, in addition to nitrogen fertiliser, some farmers do apply other substances including lime.”