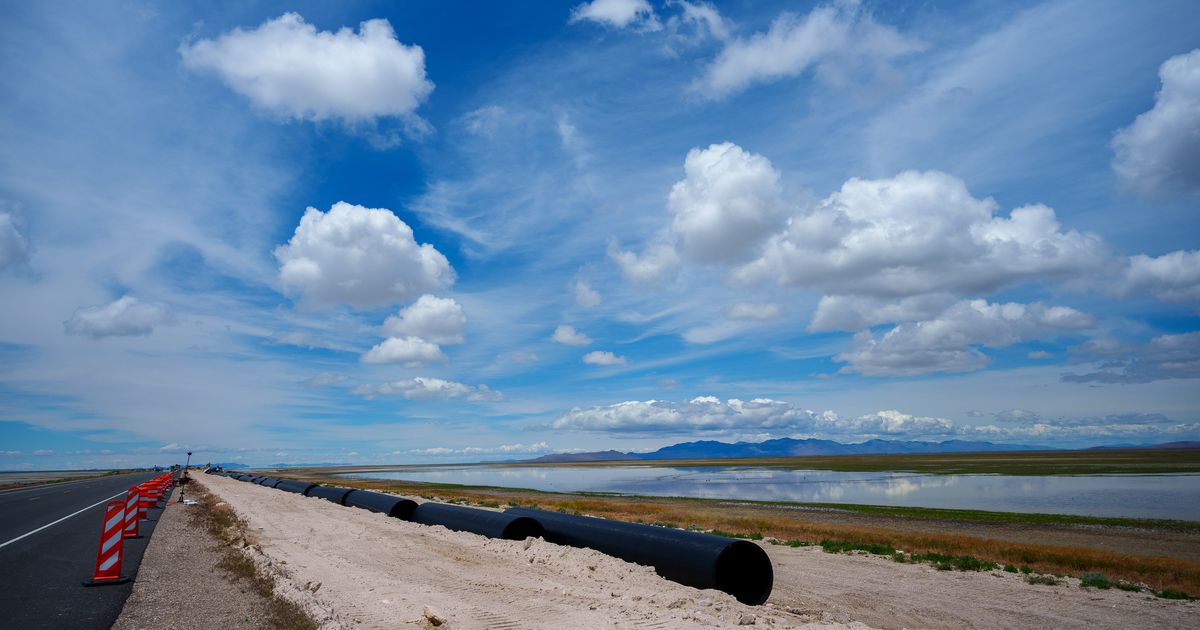 Several state water agencies briefed Utah lawmakers on the Natural Resources, Agriculture, and Environmental Quality Appropriations Subcommittee this week about their work to improve water infrastructure throughout the state.

Amid an ongoing drought, below-average snowpack and a vanishing Great Salt Lake, state officials said it would cost billions to complete water infrastructure projects and provided the Legislature with an update on water funds they’d appropriated during the last few years.

John Mackey, the interim director of the Division of Water Quality, says water quality is impacted by the state’s rapid growth. With a booming population, Mackey says the amount of waste the state has to handle is also growing and will spill more into our waterways if the older infrastructure is not updated.

The types of projects that received the highest priority on their list were “replacing septic tanks and controlling nutrients discharges,” according to Mackey.

“We’re really talking about replacing septic tanks with sewer,” Mackey told the committee, adding that many communities throughout Utah have had challenges with their septic tanks. He says the benefits of replacing bad septic tank systems are both economical and a matter of public health.

In an annual clean water survey about waste management, the division identified 127 water projects that would cost about $3.4 billion through 2030. Of that multi-billion dollar total, Mackey says $449 million would go towards “disadvantaged or distressed community projects.” These communities, he explained, are neighborhoods where the “medium adjusted household income is 80% or lower than the state average.”

Capital projects, which tend to push up sewer rates, largely impact smaller, more tight-pocketed communities. Mackey told lawmakers that these communities are mostly rural, but also include university towns, like Provo and Logan, where there is a large population and little income.

Mackey used the city of Helper as an example of where these infrastructure improvements garnered other upgrades. The municipality replaced the storm drains, sewer and drinking water systems. With these replacements, the city also got all new roads. Once the construction was complete, Mackey says, historic buildings were now being renovated and new businesses opened up in the rural city.

“The economic impacts of infrastructure cannot be understated,” Mackey said. “The benefits water infrastructure has to allow a small community to grow and prosper is really important.”

The top ten projects would cost around $274 million, according to Mackey, and nine of which are in rural Utah. Five of the projects are related to drinking water, while four are connected to the shrinking Great Salt Lake.

However, Tim Davis, the director of the Division of Drinking Water, says the majority of that money has already been spent because there is over $2 billion worth of drinking water needs throughout the state.

Last year, the division sent a survey to all the drinking water systems in the state. The survey had a 25% response rate and found that the current drinking water needs amounted to about $2 billion.

“With that 25% response rate in mind,” Davis said, “take the $2 billion as the tip of the iceberg, not that it’s comprehensive.”

The agency identified its top 74 drinking water projects (out of 600), which Davis says are mostly in rural and “disadvantaged” areas. Those projects will cost roughly $140 million to complete, according to Davis.

Similar to the Division of Water Quality, Davis’s team calculated the need of an area by the medium income, along with drinking water rates for the impacted area.

Davis told lawmakers that the ARPA funds given to the agency are going to small, rural and disadvantaged areas that have invested up to 1.7% in their local water rates. But, he said, money from the bipartisan infrastructure bill be available for other cities and will most likely be in the form of loans.

“We’ll work with all areas across the state, within our ability, to get them a funding package that works for them,” Davis said.

Joel Williams, deputy director of the Division of Water Resources, also provided an update on three water-wise projects that were awarded state money.

First, Williams spoke on the $5 million lawmakers set aside to dredge and berm Great Salt Lake.

Construction bids for the project open on June 22 and the division hopes the berming is completed by the end of July. The total estimated cost to lay the rock is less than $300,000, according to Williams. The rest of the money will be used for dredging the lake’s marina.

Next, Williams said there is $50 million left in the budget for secondary water metering. Lawmakers had allocated $250 million for tracking water use and the agency has had 75 applications totaling over $200 million in grant requests.

Since there’s still money left in the budget, Williams told lawmakers the division will open another application window this week and that will go for 45 days through the end of July. The meter projects will be presented to the board of water resources on Aug. 4 where the grants will be awarded.

Lastly, in 2018, the division started a statewide rebate program called “Utah Water Savers” where Utahns can get money back for installing water-efficient toilets and sprinkler control systems. Since then, Williams says they’ve given back upwards of $2 million to Utahns for making the switch. The majority of the money has been for “smart sprinkler controllers.”

Through public campaigns, Williams says they’re trying to instill a “lifestyle change” for Utahns to “slow the flow” of water consumption and to make residents more aware of their resource usage. One of those efforts is removing grass to save water.

Williams pointed to park strips as an example, stating it’s hard to water efficiently and it doesn’t get much use.

Instead, the division is encouraging residents and businesses to take part in their “Flip the Strip” campaign that removes the grass from park strips and replaces them with water-wise plants.

“Those conversions can save between five to eight thousand gallons of water,” Williams said.

He said the campaign has been successful and they hope to use the $5 million allotted from the Legislature for grass removal to continue those efforts in partnership with water conservancy districts.