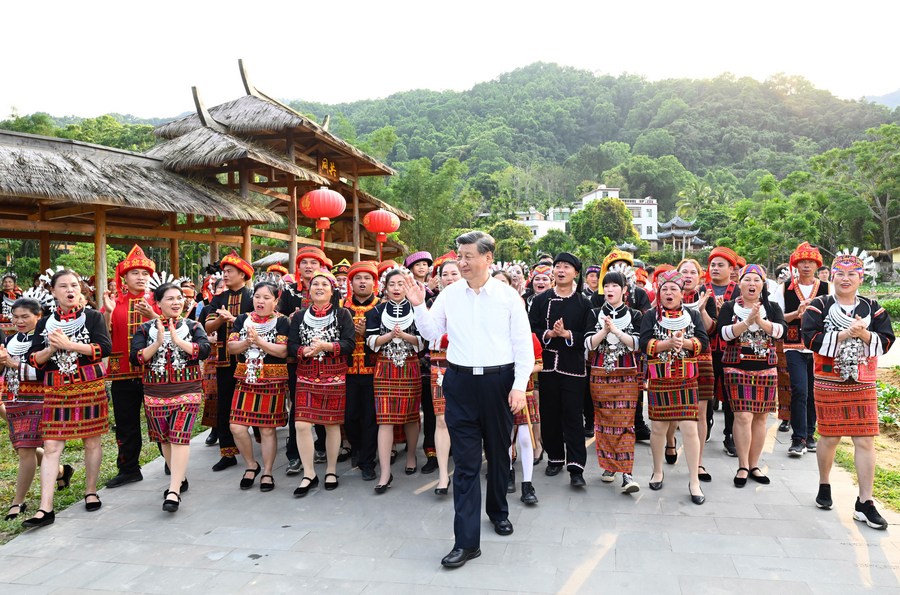 BEIJING, April 29 (Xinhua) — For Wang Juru, a tea grower from an ethnic Li village on the tropical Hainan island, President Xi Jinping appeared to be an ‘ordinary guy’ to whom the once impoverished farmer could easily relate.

“He came to my home and asked about our lives, like how our house was built and how the government subsidies were provided,” Wang said as she recalled Xi’s tour earlier this month to the once impoverished mountain village of Maona.

“He also visited our tea factory and asked about the business,” she said. “It was just like chatting with family.”

During his about five decades in politics, Xi rose from a grassroots Party chief to the leader of the Communist Party of China (CPC), from an ordinary citizen to the country’s president, from an average military officer to the Central Military Commission chairman, all while remaining committed to a better life for Chinese citizens.

THE SON OF THE LOESS LANDS

Xi visited the small village of Liangjiahe in northwest China’s Shaanxi Province in mid-February to mark China’s Spring Festival in 2015.

It was a homecoming for the urban-born Chinese President.

Fifty-three years back, Xi, just shy of turning 16, was sent to live in Liangjiahe as an “educated youth.”

He would spend the next seven of his most formative years living in that rural hamlet. That area, part of the Loess Plateau, was where the Communist revolutionaries, including his father, rose to found New China.

“At that time, I did all kinds of work — reclaiming wasteland, farming, hoeing, herding, hauling coal, mounding, and carrying manure,” Xi later recalled.

At the end of a day’s labor, he would return to his primitive, flea-infested cave house and sleep on a simple clay bed. That first-hand experience with poverty would stay with him.

For all its discomfort and bitterness, Xi’s coming of age in that remote corner of China left him with an intimate understanding of rural life in this populous country, an acute self-awareness, and an ability to relate to people from many walks of life.

Xi himself spoke of his time in Liangjiahe with fondness in the years to come.

“As a public servant of the people, I have my roots deep in the northern Shaanxi plateau because it cultivated my unchanging mission: to do practical things for the people!” Xi wrote years later in an autobiographical work. “Wherever I go, I will always be a son of the loess lands,” he wrote.

Xi arrived in Liangjiahe as a slightly bewildered teenager and left as a 22-year-old man determined to serve the people.

His love for the grassroots commoners eventually took him on an odyssey across China that saw him labor in different provinces and municipalities.

In the 1980s, when many of his contemporaries were going into business or leaving to study abroad, Xi gave up his comfortable office job in Beijing and chose to work as the deputy Party chief of a small county in north China’s Hebei Province. Later he became the Party chief of Ningde Prefecture, one of the poorest regions in east China’s Fujian Province at the time.

From his early years, Xi seemed uninterested in the trappings of offices. He would travel for days, sometimes into the mountains, to talk with people at the grassroots, learn about their difficulties, and help solve their problems.

While in Ningde, Xi visited almost all its townships, including three of the four without access to paved roads. Xiadang, a township nestled deep in the mountainous area of Shouning County, was one of them. Back then, the average annual per capita net income of farmers in Xiadang was less than 200 yuan (about 31 U.S. dollars). It was one of the poorest townships in Fujian.

At the time, the only road connecting the area to the outside world was a narrow path covered in thick brambles that winded along rocky cliffs. Xi and his team had to walk for two hours on his first trip to Xiadang.

Xi decided it was essential to focus on accessibility for the area to take off. Work began on a highway just months after his first visit, and the road into Xiadang opened in January 1991. By 2020, Xiadang residents’ per capita annual income had increased to 17,289 yuan (about 2,682 U.S. dollars).

Similarly, he described his work in Zhejiang Province by saying he had seen “nearly all of Zhejiang’s mountains and waters.”

He asked officials to “go to the countryside more often and visit farmers’ homes more often” and get their boots dirty to grasp the realities of China the hard way.

“Xi Jinping’s experience in grassroots work has made him more aware of the hardships of ordinary people and more aware of their expectations,” said Yan Shuhan, a professor with the Party School of the CPC Central Committee. “His care for the people is the starting point and fundamental goal of his governance.”

THE SERVANT OF THE PUBLIC

Xi chose to serve the grassroots people in 1982. Thirty years later, the people chose Xi to lead the nation.

On November 15, 2012, Xi Jinping was elected general secretary of the CPC Central Committee.

When he addressed journalists that day, he referred to “the people.”

Fulfilling the people’s aspiration for a better life is always at the center of Xi’s blueprint for the country’s new journey towards “a great modern socialist country.”

He has made it a tradition to visit ordinary people, especially the country’s least privileged groups, in nearly every one of his domestic inspection tours.

He would see, for himself, what ordinary Chinese were eating, whether they had access to clean water and adequate heating in the winter, and learn about their concerns over food safety and environmental protection.

In November 2013, during an inspection tour to the central province of Hunan, Xi visited Shibadong, an ethnic Miao village labeled “poor” at the time.

“What should I call you?” asked illiterate villager Shi Basan as she welcomed Xi into her home. “I am a servant of the people,” Xi introduced himself.

During that tour, Xi put forward the concept of “targeted poverty alleviation” for the first time.

Poverty had plagued China for thousands of years. Despite decades of economic boom, China in 2012 still had 98.99 million people living under the poverty line, with a per capita income of less than 2,300 yuan a year, or about one U.S. dollar a day.

Xi set year 2020 as the deadline for China to eradicate absolute poverty, ensuring all Chinese could take their rightful place as citizens of a well-off society.

Between 2012 and 2020, over 3 million public sector officials were sent from cities and towns to villages to fight poverty “on the front lines.” Nearly 1.6 trillion yuan (about 248.4 billion U.S. dollars) of fiscal funds were invested into poverty alleviation programs.

In February 2021, Xi announced a “complete victory” in eradicating absolute poverty, and with that, China created yet another “miracle” that would “go down in history,” he said.

But Xi’s vision of a better life for the people goes far beyond the already unprecedented feat of feeding and sheltering all of China’s 1.4 billion population.

Over the past decade, Xi has led China to build the world’s largest infrastructure network while staying committed to realizing fuller employment.

He set the goals to achieve carbon peaking by 2030 and carbon neutrality by 2060. Last year, the share of days with good air quality rose to 87.5 percent, up 0.5 percentage points from 2020.

The country has the world’s most extensive social security system in scale and the largest middle-income group. Absolute poverty has been eliminated once and for all.

Since 2012, his anti-corruption war has seen more than 400 officials at the ministerial level or above investigated or punished.

Xi was re-elected general secretary of the CPC Central Committee in 2017 and Chinese president in 2018.

According to the Edelman Trust Barometer 2022 China, an annual online survey in its 22nd year, 91 percent of Chinese respondents said they trusted the Chinese government.

In his latest new year’s address to the entire nation, Xi said: “The myriad of things we attend to boil down to matters concerning every household.”

In an interview with the Guardian in 2017, Cheng Li, director of the John L. Thornton China Center with the U.S. think tank Brookings Institution said the Chinese people view Xi as a strong leader. “He gets things done. He makes Chinese people proud,” Li said.

THE PUPIL OF THE PEOPLE

Xi’s people-centered philosophy also explains why he ordered unwavering efforts to save people’s lives at all costs during the COVID-19 epidemic.

For over two years, China has fought an unprecedented battle to fend off the epidemic, tackling resurgences by sticking to the dynamic zero-COVID policy instead of choosing to “live with” the virus.

So far, this strategy has worked. The government’s practice throughout the epidemic of trying to find and isolate every infected person has largely protected hospitals from becoming overwhelmed and staved off the deaths that have engulfed much of the world.

In essence, what Xi commands to counter the epidemic is a “people’s war” — waged by the people and for the people.

Under Xi’s leadership, millions of community workers were mobilized to regularly disinfect public spaces, check body temperatures, register visitors, and take them to quarantine if necessary.

Grid management and neighborhood watches were initiated in some cities to detect and isolate suspected cases and their close contacts as soon as possible. Tens of thousands of volunteers showed up to help.

At one point, nearly every Chinese was fighting this anti-COVID war.

“There are no heaven-sent heroes in this world, only ordinary people who stepped forward to face the challenge,” Xi said.

The people have been the very source of the CPC’s strength and wisdom ever since the conception of the world’s largest ruling party.

His words were well heeded.

When Chinese authorities drafted the 14th Five-Year Plan, a key blueprint for the country’s economic and social development between 2021 and 2025, more than 1 million comments poured in as public suggestions were solicited online in August 2020.

In April, the CPC asked the Chinese public to contribute opinions on its 20th national congress to take place in the second half of 2022 over issues such as the strict Party governance, high-quality development, comprehensive opening-up, whole-process people’s democracy, law-based state governance, socialist cultural advancement, people’s livelihoods, and ecological progress.

Xi’s own governance philosophy is deeply rooted in the people’s practical, innovative efforts.

Back in the 1990s, limestone processing for cement manufacture used to be the source of livelihood for residents of Yucun in east China’s Zhejiang Province. But the short-lived boom came with a high price for the locals — they had to reel under dusty air and heavy pollution. By the early 2000s, the villagers decided to shut down cement factories to save the environment.

During an inspection tour to Yucun in August 2005, Xi, the then Party chief of Zhejiang, spoke highly of the village’s wise move to shut down mines. Xi put forward the concept of “lucid waters and lush mountains as invaluable assets.” That vision has become a guiding principle in China’s ecological progress nationwide.

“Looking back over the 100 years of history, always staying with the people is the secret of the CPC’s great achievements in the annals of history,” said former Japanese Prime Minister Yukio Hatoyama.

Overseas observers said the CPC, led by Xi, has been drawing its inexhaustible strength from the Chinese people to forge ahead with confident strides on its new journey.